A Mortician’s Tale is a game about death, but it’s anything but morbid. Instead, it seeks to normalize death and to lift the stigma of talking about how different people deal with it. It’s Canadian indie studio Laundry Bear Games‘ debut, and it’s available on October 18 for PC and Mac.

You play as the silent protagonist Charlotte (or Charlie, as she likes to be called), who just started work as a mortician at Rose and Daughters Funeral Home. Every day is structured in the same way: Charlie checks and reads her emails; she prepares a body according to the family’s wishes; and then she goes into the parlor to pay her respects. You interact by clicking on objects and people on the screen, picking up tools to perform processes like embalming on the bodies, and listening in on the conversations of grieving friends and family.

Each step of the embalming or cremation process is reduced to a step-by-step set of mundane instructions. There’s an element of ritual as you quietly remove personal effects from the deceased’s body and carefully prepare them for their funeral. The art style is awash with calm, pastel colors, and everything is treated as matter-of-fact. It’s welcoming and friendly, as though it’s inviting you to share in a reflective moment and to accept the realities of mortality without any judgment or shame.

Laundry Bear describes the game as “death positive,” a term that refers to a movement that encourages folks to re-examine their relationship with and fear of death. Gabby DaRienzo, Laundry Bear’s cofounder and artist, says that she was inspired by a number of friends who work in the death care industry, which includes services such as funeral homes and cemeteries. She also cites author Caitlin Doughty, who runs the YouTube channel “Ask a Mortician” and wrote Smoke Gets in Your Eyes about her experiences.

“Death positivity sounds like a bizarre term, but really it’s a movement that encourages people to be open to talking about death, and to explore their fears of grief and mortality,” said DaRienzo in an email to GamesBeat. “[Doughty], and her story about going from working in a crematorium, to attending funeral direction school, to running her own green funeral home, are what really inspired the story of A Mortician’s Tale.”

DaRienzo says that games are a unique way to incorporate and explore death because of interactivity. Her podcast Play Dead looks into this, as she interviews other game designers and developers about the different ways death functions in their work. She says that many times, it’s simply a mechanic used to punish the player or to add extra challenge.

“Oftentimes it feels like some game designers aren’t really considering how death best fits their games, and opt to use mechanics like life systems and respawning which feel tired,” said DaRienzo. “That being said, I think there are a ton of game developers doing super promising things with death in games. What Remains of Edith Finch, Undertale, Severed, Night in the Woods, and even Doom are some of my favourite games that do cool things with death.” 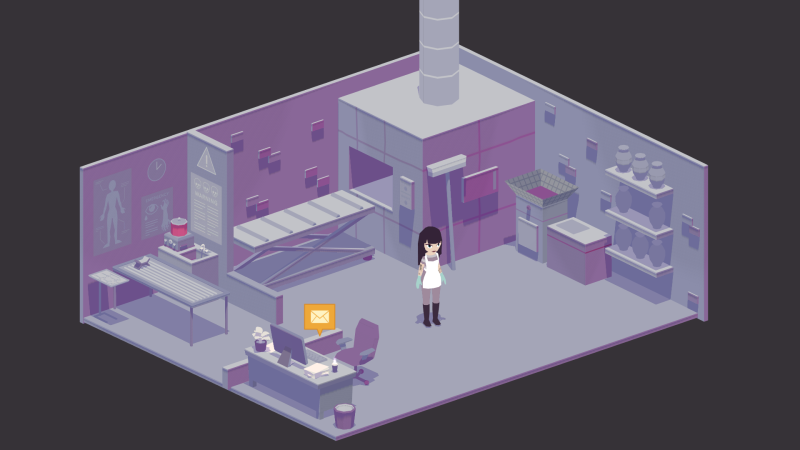 Above: Charlie in the Rose and Daughters Funeral Home morgue.

Every day, Charlie receives an email from Funerals Monthly, a fictional newsletter that deals with topics like cultural differences in mourning rituals, eco-friendly funerals, and the idea of keeping a deceased loved one at home for a period of bereavement. A Mortician’s Tale lays out the particulars of end-of-life planning in a way that demystifies the process, giving a personal look at how folks in the funeral industry may view death.

It’s also based on personal stories from Laundry Bear’s team.

“The idea of death positivity is not to erase feelings of grief or loss, but to instead be open to understanding it, and discussing it,” said DaRienzo. “Ultimately being comfortable with talking about death allows us to make informed decisions for both ourselves and our loved ones. About 6 months ago, during the development of the game, I lost my mom to breast cancer. In hindsight, I think the knowledge I learned from all the research we had done previously for A Mortician’s Tale allowed me to support my dad and sister, while also processing my own feelings.”

In A Mortician’s Tale, messages from Charlie’s friend Jen Love offer peeks into her personal life, such as the struggles of dating as a mortician. Her coworker’s emails express shared grievances, implying that Charlie also feels frustrated about certain things at work. However, Charlie never speaks aloud. DaRienzo says they designed her that way to give players room to “apply their own narratives to it” because of how personal the subject of death is.

“Most things in the game are optional — talking with the bereaved or reading through Charlie’s emails for example — which allow the player to explore the game at their own pace,” said DaRienzo. “This also puts the focus less on Charlie and more on the others around her — the grieving loved ones, her colleagues, and friends. Ultimately I think the narrative of the game is much stronger because of this, and supports the role of the funeral director as a support, while creating a vessel for players to explore the game through.”