Atari is charging forward with its plans to make a new video game console, the Ataribox, the first such hardware from the iconic American game company in a while. We first confirmed it in June, and the company hopes to launch the box in the spring.

Feargal Mac (Mac Conuladh) is the general manager overseeing the box, and he said the company plans to crowdfund the Ataribox on Indiegogo for the Linux-based machine with an Advanced Micro Devices processor. Mac told us in a recent exclusive interview that the Ataribox will sell for $250 to $300. While that is close to the price of rival consoles from Sony, Microsoft, and Nintendo, Mac said the advantage of the Ataribox is that it will be open, allowing owners to run a wide variety of their own games on it. He sees the box as an indie machine, able to run classic Atari games as well as new indie titles such as Minecraft and Terraria.

GamesBeat arranged a fireside chat between Fries and Mac at Indiegogo’s headquarters in San Francisco. Fries got his start programming games on the Atari 800. At Microsoft, he helped create the original Xbox, and he ran Microsoft Game Studios until 2004, when he retired from Microsoft.

In his retirement, Fries has been advising startups and restoring old arcade machines. Fries also created Halo 2600, a 2010 homage to the Atari 2600, the classic Atari console that first debuted in 1977. So Fries was a natural to quiz Mac about Atari’s intentions to launch the Ataribox, the first Atari game console since it discontinued the Jaguar in 1996. Fries also asks why the Ataribox will be different from the Ouya, the Android home console that failed.

Mac has worked at Apple, Epson, and Lenovo. More recently, he has worked at FMTwo Game on the Gameband smartwatch. Here’s an edited transcript of our interview, as well as a video of the entire interview as well. The video has been edited down, while the transcript has the full conversation. 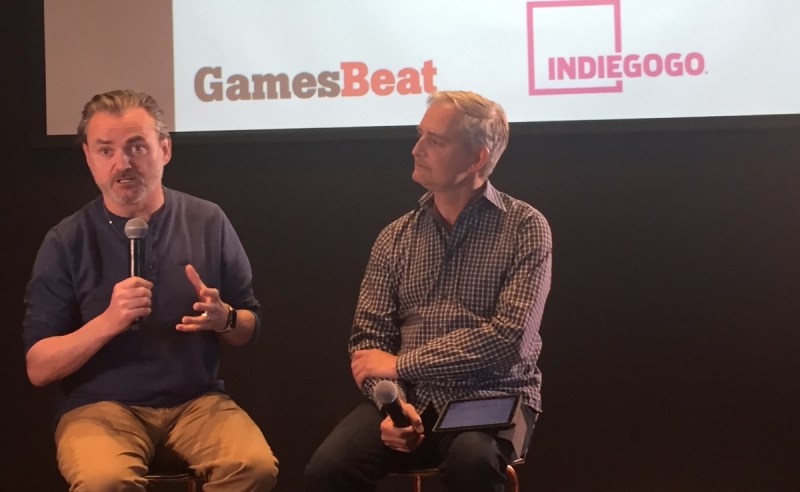 Ed Fries: I wanted to get into your history a little. What kind of background led you to launch your own game console?

Going back a few years, I wanted to get out of big companies and get involved in startups, because that seemed like a lot of fun. I got involved in some startups. I helped make a product called Gameband. What I learned—I thought I was very clever working at big companies. But when you’re doing it with no safety net, it’s really hard. You have to learn everything all over again.

What led me to startups was this desire to build products and build tools. Sometimes at a big company there are a lot of tradeoffs that aren’t always fun to be a part of. I thought it would be fun to have the freedom of doing it at a startup, not taking into account all the pain of doing it. But that’s what I’ve done, getting involved with Atari. A well-known company, but this is really something new that we’re bringing back with Atari.

Fries: You have a history of doing crowdfunding. In fact you have one project out there, Gameband, and people haven’t gotten their Gamebands yet.

Mac: No, they haven’t, but they will.

Fries: So why are you doing something new?

Mac: We do have another project there at the moment, Gameband. It’s on another crowdfunding platform some of you may have heard of. We have a great bunch of backers. We’re running a few months behind until that gets delivered, but it’s been a great experience. When you talk to your backers, it’s amazing. There’s not been one single complaint. We said, “Look, we’re three or four months behind,” and they were all supportive. They’re involved in the process, which is the great part of crowdfunding.

That’s a different team and a different technology. Trying to fit things into a wearable product is very different from building a box. You whole bunch of haptic and physical problems to deal with. We’re doing that with Qualcomm, who are huge in that space. It’s a very different thing, but it’s still a consumer product. Hardware is hard. We’ve talked about that.

But the opportunity to do the Ataribox has come along and it’s such a great opportunity that I signed up to do both. I wear two hats, on two different teams, bringing these two projects to market. 2018 is going to be really interesting, and probably a challenging year, but fun as well. 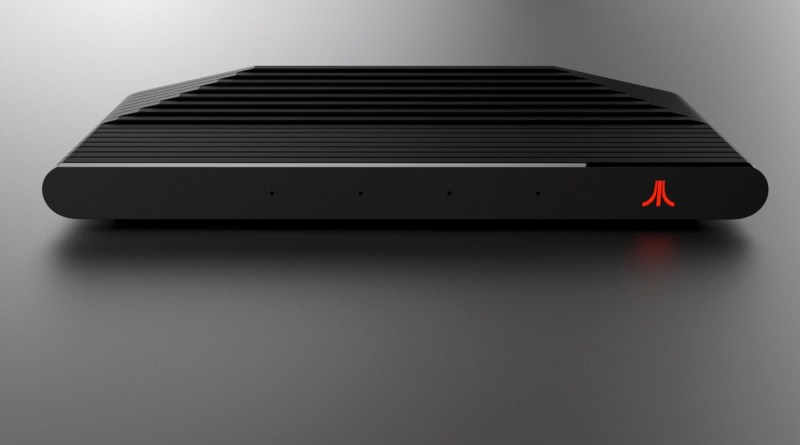 Above: Atari’s game console with a red logo option.

Fries: What made you bring this project to Indiegogo?

Mac: There were two sides of it. As Atari, why crowdfunding? One of the things about Atari that I’ve seen and learned from being involved these last few months is its community. Atari still has this incredible community. No matter who you talk to, they have an Atari story. People are so involved. Even on this trip, going through customs, it was the first time a customs officer asked where I worked and I said, “I work with Atari.” “Oh my God, I had one when I was a kid!”

That community has really kept it alive, and bringing this box to market through crowdfunding lets us make that community part of the process. They can be involved and give feedback. I think it’s the only way to do it. We’ll talk about this use case in a bit, but it’s really a different positioning of the TV device. You have to learn and take feedback from real customers. Doing true crowdfunding lets you do that. That’s one of the main reasons.

As for Indiegogo, I’ve learned a lot about Indiegogo in the last six weeks. To be really blunt, we were taking this in a different direction, and then I met some people from the Indiegogo team. It’s been fascinating what’s gone on here in the last year and beyond. Indiegogo has doubled down on products. They’ve brought a lot of concrete things to help people get to market.

This relationship with Arrow Electronics, which is a Fortune 100 component company—they have 25 people working for Indiegogo, including 15 dedicated engineers. When a project goes on that’s Arrow-certified, you have this huge tech company saying, “This can be built for this price.” Stuff like that we’ve found very helpful as you’re trying to bring a product to market. It’s real resources.

The focus on product, having those resources at the table—the team themselves are genuinely passionate about Atari. They understand what we’re trying to do. They’ve had a lot of success with products delivered. We’re talking about products that have been delivered on the market in the past few months. There are also big brands – people like G.E., Harmon Kardon, Motorola – who are launching products on Indiegogo. There’s a corporate link.

Why bring these products to life with their customers? Because it leads to a better product in the long term. It’s not just raise some money, do this thing or not. It’s about bringing products to life in a more collaborative way so they’re better products. All that led me, in the last few weeks, to change how we’re going to do this and lock in to do it with the Indiegogo team.

Fries: Let’s talk about Atari. People aren’t sure what Atari is today versus Atari when we were kids. What are they doing? How are you getting them involved in a project like this?

Mac: The gut reaction is always, “Oh, I remember Atari when I was a kid,” and then, “Are they still around?” Atari is absolutely around and it’s an incredible brand. It ignites passion, still. I see seasoned, hardcore engineers, pretty straight-laced folks, just melt when you talk Atari, because they remember opening it under the tree or whatever it was.

As a company, I hear people say, “Oh, it’s not Atari anymore.” Well, yeah, it is. It’s changed hands, but so has Apple over the last 25 years. There are people walking around the halls of Atari that have been there 20-plus years, through all of these iterations. More than the ownership or the location or any employees—as a brand, a company stays alive because people love that brand. That hasn’t broken with Atari. When I look at it as a company, it’s still Atari.

What it is today, it’s evolving. It’s had a great three or four years. It’s come from the brink of the abyss—you can pull their numbers. It’s going to be a great business case study in a few years, where you can see they’ve come from debt and a bad situation, growing their revenues year on year, working on the brand merchandising. They have games that have done exceptionally well this year, classic titles like Rollercoaster Tycoon. Tempest is coming back soon for console. It’s still a company. It’s always been a company. It’s made a great comeback. I’m super excited to be working with a brand like that, that elicits so much passion. 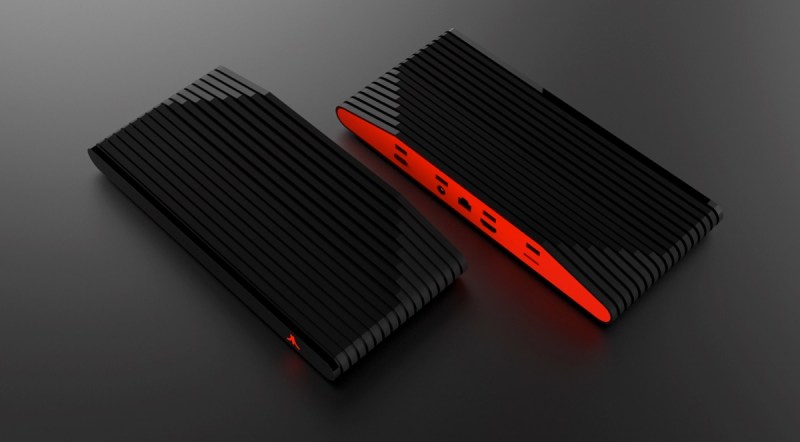 Above: The front and back of the modern black/red Ataribox.

Fries: Let’s talk about the project. I ran the games business for Microsoft during the launch of Xbox. It was not a small project. The marketing budget alone was more than $500 million. We had a massive team, about 1,200 people. But you’re going to do this with just a few guys. How is that even possible?

Mac: For starters, it’s a couple of things. Sony and Microsoft are great companies, the console kings. It’s like Pepsi and Coke. If someone gives you a billion dollars and says, “Go make the new Coke,” you can’t do it. Richard Branson tried it and failed. We’re not trying to be those guys.

The best answer to the question is to talk about the genesis of the use case. This is a very specific use case that drew us into it. I worked on a project that went on to become Minecraft. People remember that, maybe. I got to work with a lot of younger players and watch how they play. One of the things that was interesting was they’d take laptops and plug them into the TV. Why would you do that if you had an Xbox or PlayStation?

It was the way in which they engaged. They would play something like Minecraft or other great indie games, and then they jumped into YouTube. When they’re not playing they’re watching YouTube, or they’d have Discord or Skype or Twitch in the background. It was this PC experience that, on a DIY basis, they were bringing into the living room.

I wondered, “Well, what if we take PC technology, take some existing, tested technologies, and bring it into this product?” Bring that to the TV in a very easy to use way, but also a very open way. With Ataribox we’ve worked with AMD – tried and tested technology, not something that hasn’t done before – and we’re working with Linux. We’re joining dots.

Then we have a great mechanical team. Design-wise, we’ve been very passionate about design around the Ataribox. The Atari 2600 is one of the most iconic consumer products of all time. The first one came out of Silicon Valley even before Apple. We’re trying to take that design, build the hardware around this great use case, and join it together with very stable technologies. That allows us a lot of leverage to get this thing delivered.

The people who are going to build this, which we’ll announce when we go live, these are tried and tested manufacturing companies who’ve built a lot of the products we’ve already talked about. People are going to have to judge that when they see the campaign. They’ll see the caliber of companies and people involved in getting this delivered. But the key thing is taking existing, stable technologies and presenting them to people in a new way.