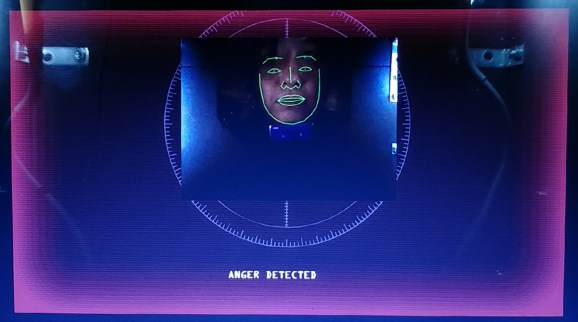 The view from the Evaluation Aperture of the Emotional Fugitive Detector.

Emotional Fugitive Detector is an imposing silver box from a dystopian future in which personal expression has been outlawed. It’s a co-op video game installation by graduate students from New York University’s game design program, who have taken it on tour to the Game Developers Conference and the IndieCade Festival, where it was a finalist.

An explanation on the side of the box explains that it’s a test from the Human Management Bureau, which has outlawed emotions. When I tried it at IndieCade, I sat on one side of the box, resting my head in the “Evaluation Aperture.” My partner sat on the other side. Our task was to fool the machine, which uses facial recognition technology to detect traces of emotion.

The computer showed me three prompts: anger, happiness, and sadness. I had to keep my expression blank so that the computer didn’t pick up any traces of them, but I still needed to indicate to my partner which prompt I’d just seen. His job was to pick which emotion I was trying to communicate.

Unfortunately, we failed to trick the machine, which printed out an execution notice. I was officially an emotional fugitive and was scheduled for termination.

Emotional Fugitive Detector is from three students, Noca Wu, Sam Von Ehren, and Alexander King. In 2016, they attended Alt.Ctrl.GDC, an event that showcases how games can use alternative control schemes. They were inspired to create a “face fighting” game, where players would use their facial muscles to control their characters.

But they ran into a roadblock: the limitations of face-tracking technology. Wu says that they encountered issues like lag and false positives, and after playtesting it, they decided to scrap that particular idea.

“However, in one of the playtests, one of our professors — Matt Parker — who has worked on a lot of interactive media and installations suggested that when working with finicky technology,  embracing the imperfect often ends up more fun than trying to fix the key issue,” said Wu. “In response we turned the entire game concept around: instead of using the software to control a game, the game would be circumventing the software.” 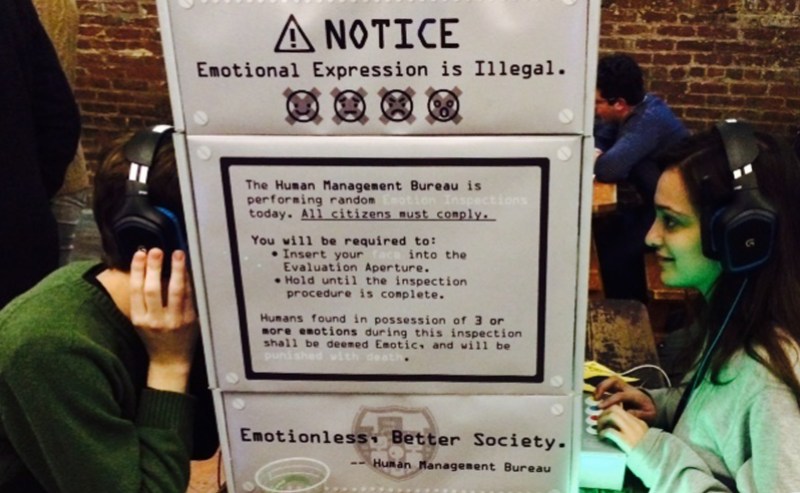 Above: Emotional Fugitive Detector at the Brooklyn Brewery Game Night in 2016.

Emotional Fugitive Detector’s physical design not only completes the illusion of nefarious dystopian tech, but it also helps the accuracy of the facial recognition software. In playtests, players often moved around a lot or talked to their partners, which would cause the game to break as the software would get confused. Wu says they built the game’s chassis to “lock” the players in place to constrain their movement, and it helped the algorithm work better.

“One downside to a physical set up is different show environments. We’ve made three robots in the development process of this game,” said Wu. “It surprised us how much the physical setup and environmental factors can affect the facial recognition, and thus the gameplay.”

For instance, after they demoed at Alt.Ctrl.GDC earlier this year, they realized that it’s difficult for the software to scan for expressions in a brightly lit space. They added a foil curtain on the side with the “Evaluation Aperture” to shroud the player in darkness. Wu says that the physical aspect of the game involves a lot of on-the-go thinking as they have to make sure it works no matter what the environment.

Wu says that the response to Emotional Fugitive Detector has been positive, particularly when two strangers learn how to work together to trick the computer.

“One most rewarding responses occasionally comes after two players beat the game,” said Wu. “Complete strangers will smile at each other, shake hands or high-five, and maybe start a conversation with each other. We think this is a type of magic games have, and we are happy to see that.”