The Nintendo Switch might have outsold the PlayStation 4 in September, but it’s Sony video game console that’s ruling the TV screen, leading in ad impressions month after month.

GamesBeat has partnered with iSpot.tv, the real-time TV ad measurement company with attention and conversion analytics from more than seven million smart TVs, to bring you a monthly report on the TV ad impressions generated by the gaming industry’s biggest campaigns. These are the ads, and by extension the games, that game makers are putting major muscle behind.

Below are the top five most-seen gaming industry brands from September 16 through October 15. 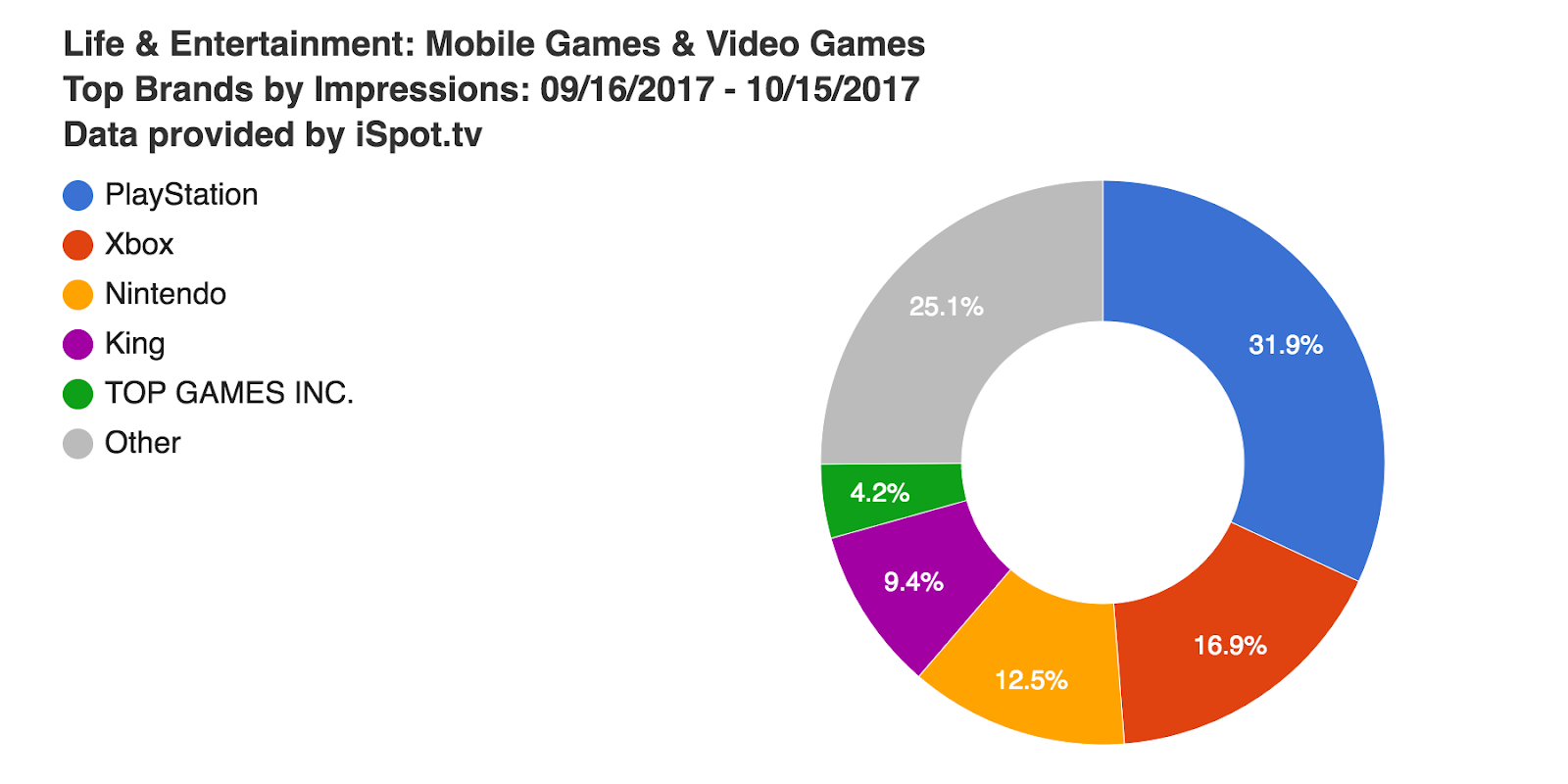 For the second period in a row, TV ad impressions from the gaming industry increased, up to 2.9 billion from 2 billion in our previous report. More brands came out to play as well: Thirty-five companies (up from 32 last time) ran 121 spots over 17,600 times with an estimated spend of $65.9 million. PlayStation maintained a strong lead, while Xbox moved up in the ranking.

PlayStation captured over 31 percent (954.5 million) of the industry’s impressions with its 14 ads that aired over 4,000 times. The most-seen spot with 186.3 million impressions was “FIFA 18: El Tornado” featuring Cristiano Ronaldo and James Harden. PlayStation got its ads in front of a sports-loving, male-skewing audience that was watching networks including ESPN, Fox, and ABC, and programming such as NFL football, college football, and South Park.

Xbox snagged second place, up from fourth last time, with 504 million impressions generated from eight commercials that ran over 1,800 times. Its top ad was “Middle-Earth: Shadow of War: Still Fighting” with 261 million impressions. Sports TV was also a focus for Xbox, with programming such as college football, NFL football, and SportsCenter producing the most impressions for the brand; the top three networks for Xbox were ESPN, TBS, and ABC.

Nintendo maintained its hold on third place with 374.3 million impressions generated off of 10 spots that aired over 3,000 times. The commercial with the most impressions (78.6 million) was “Arms: Answer the Call to ARMS.” Among the networks the brand prioritized: Disney Channel, Adult Swim, and Nick; among the shows: SpongeBob SquarePants, Family Guy, and Raven’s Home.

King slipped to No. 4 from No. 2 with 280.2 million impressions generated from six ads that aired over 2,000 times. Candy Crush was once again the focus, with “Candy Crush Saga: Fly Through the Levels” being the most-seen ad with 173.2 million impressions. Spots that aired during crime procedurals including Law & Order: Criminal Intent, Law & Order: Special Victims Unit, and Forensic Files had the most impressions; in terms of networks with the most-viewed King commercials, ION, Investigation Discovery, and ABC led.

In fifth place: Top Games, Inc., with 126.7 million impressions from seven spots that aired over 1,600 times. All the commercials promoted the game Evony, with “Evony: The King’s Return: Choose Your Civilization” garnering the most impressions (32.2 million). The networks generating the most impressions for top games included History Channel, Fox News, and Fox Sports 1, while the top programming included MLB baseball, That ’70s Show, and college football.