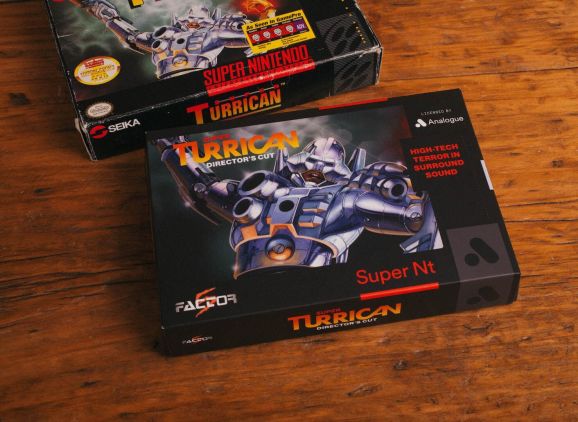 Nintendo released Star Fox 2 in its Super NES Classic Edition console that launched earlier this month for $80, but it’s not the only unreleased 16-bit game rising from its grave decades later. Analogue, the company that makes high-quality updated versions of classic consoles, is revealing that it will include Super Turrican: Director’s Cut with every Super Nt system it sells.

Super Turrican is a run-‘n’-gun shooter from Factor 5. It debuted for the Super Nintendo in 1993, but that version featured reduced graphical quality because the developer and its publishing partners could not afford to manufacture the 6Mbit cartridges that its original vision required. Instead, the game went out in a downgraded, 4Mbit state.

But nearly a quarter of a century later, Factor 5 has worked with Analogue to restore the original version as a Director’s Cut release. Each Super Nt owner will get it along with the sequel, Super Turrican 2, which is a digital copy. The system will also come with a collectible box for Super Turrican: Director’s Cut.

The Super Nt is Analogue’s $190 update of the Super Nintendo that adds support for HDMI and full HD 1080p without introducing lag. It uses an field-programmable gate array (FPGA) chip that Analogue arranged to work exactly like a Super Nintendo. That means it doesn’t use emulation or other tricks — it is simply a Super Nintendo on a new chip.

For Super Turrican: Director’s Cut, this means it will run exactly like it would have back on the Super Nintendo.

“This is like Fritz Lang’s Metropolis scenes showing up 80 years later,” Analogue founder Christopher Taber said. “You see this kind of thing in film, but not so much in video games.”

Even in its downgraded form, Super Turrican won over players at the time. Now, those fans as well as an entirely new audience will have a way to experience it the way Factor 5 intended.

“We’re beyond excited at the opportunity to preserve this piece of history in the most authentic way possible and bring it to the world the way it was always meant to be released,” Taber said.