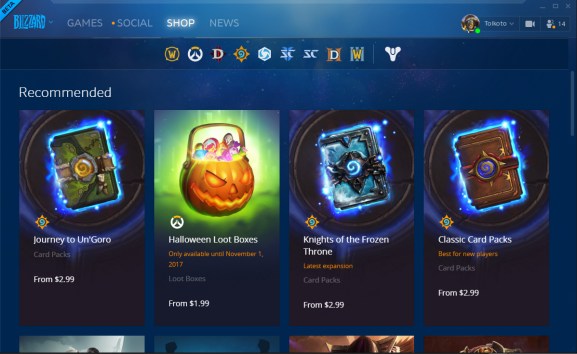 Blizzard announced new features coming to its Battle.net game launcher. Notably, you’ll be able to use a new Shop tab to easily buy and gift your friends in-game items like packs of Hearthstone cards.

The Shop tab is available in Battle.net’s beta version, which anyone can download. It joins the also-in-beta Social tab, which makes it possible to create groups that help you organize your friends. But the gifting feature is a new addition, and it can make it easier to give your buddies some nice presents (and just in time for the holiday season).

In-game gifting has already been available in some Blizzard games, notably World of Warcraft. But the process can be a bit cumbersome and requires using an online shopping webpage that’s separate from Battle.net. The Shop tab makes it possible to handle all of the gifting from inside the client.

Aside from Hearthstone packs, you can also send your friends (or buy for yourself) Overwatch Loot Boxes, World of Warcraft pets and mounts, the Diablo III Necromancer class, and more.