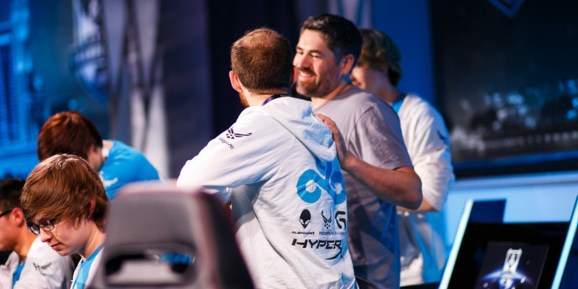 Cloud9 cofounder and CEO Jack Etienne with the Cloud9 League of Legends team.

Esports organization Cloud9 announced today that it closed a $25 million round of Series A funding. Some of the investors from the seed round earlier this year have joined, such as Founders Fund and the tech investor Bill Lee, who put in a joint investment with tech investor David Sacks. The Series A has again attracted investors from the traditional sports world, such as Washington Capitals and Wizards co-owner Raul Fernandez; the Beverly Hills Sports Council; Michael Ovitz, the cofounder of talent and sports agency Creative Artist Agency; and World Wrestling Entertainment.

In addition to raising the funds, Founders Fund partner Brian Singerman will be joining Cloud9’s board of directors. WWE and San Francisco Giants outfielder Hunter Pence, who invested in the seed round, will be joining as board observers.

WWE has been making a push into esports. Earlier this month, it partnered with gaming and media company IGN Entertainment for a livestream event: WWE x IGN esports Showdown. The first was October 5 and pitted WWE wrestlers against each other in the virtual ring of the fighting game Marvel vs. Capcom: Infinite. It was also a Series B investor for Drone Racing League, which seeks to popularize drone races as a spectator sport.

“At WWE, we are constantly looking to innovate through our venture portfolio, and esports is particularly exciting to us,” said George Barrios, the chief strategy and financial officer of WWE, in a press release.

Esports will generate $696 million this year and market analyst Newzoo predicts it will balloon to $1.5 billion in 2020. Cloud9 is one of the most recognizable names in the space, and it has teams that compete in all the popular games such as Riot’s multiplayer online battle arena, League of Legends; Blizzard Entertainment’s card battler, Hearthstone; and Valve’s Counter-Strike: Global Offensive shooter and MOBA Dota 2.

It also recently bought a slot in the Overwatch League, claiming London as a home city for its team.

“We have the support of terrific group of investors whose expertise in sports and entertainment will help us focus on the next step in Cloud9’s journey to helping define the future of esports,” said Jack Etienne, Cloud9’s co-founder and CEO, in a press release. “We will now invest in expanding across leagues, outfitting our training facilities & housing and taking the entire organization to the next level.”