Projection: First Light is a puzzle-platformer that explores different cultures in a world of shadow puppetry. It’s the debut game from Australian indie studio Shadowplay Studios, and it’s slated for release in Q2 2018 for PC, Nintendo Switch, PlayStation 4, and Xbox One.

“Projection came from one of those ideas when I was playing with a low hanging light in my house and wondered what it would be like to add physics to shadows,” said Shadowplay founder and designer Michael Chu. “There’s always something enjoyable about taking existing things people are very familiar with and adding a twist which suddenly brings a lot of complex gameplay.”

Greta, the main character, finds a rundown shadow puppet theater in her hometown in Germany. It grants a power: controlling shadows. She embarks on an adventure where she learns the different stories of cultures beyond what she’s known during her sheltered life. Projection draws on a number of puppetry styles, such as Indonesian and Greek, and Greta learns more about them all.

Chu first created a prototype of Projection at the Global Game Jam in 2016 along with artist Yosha Noesjirwan. The two continued developing it using GameMaker but ran into technical difficulties, so they teamed up with fellow Australian studio Sweaty Chair Games to rebuild the game in Unity. 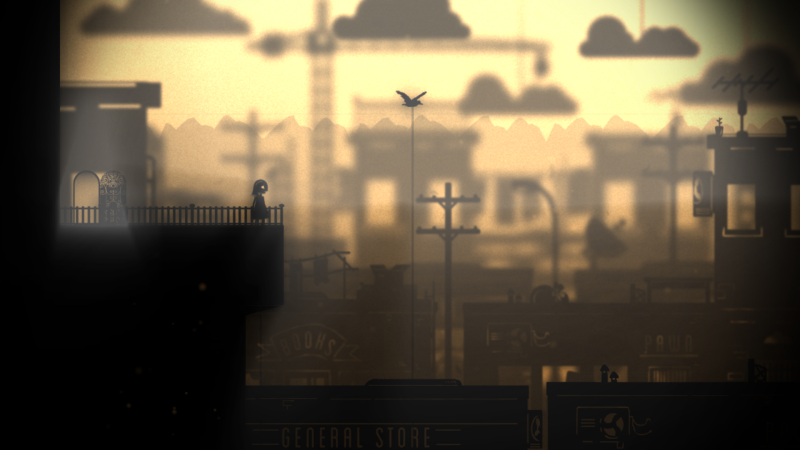 Above: Greta in one of Projection: First Light’s cityscapes.

This is Chu’s first game, and he along with the two other members of Shadowplay have been working on it evenings and weekends. It’s a passion project that’s been paid for with his salary from his full-time job. He says that though the indie scene in Australia is still fairly small — particularly in Sydney, where he’s based — he’s had some help from other local studios.

“Furthermore, this is the first game we’re releasing, so everything really is trial and error,” said Chu. “However, we have had help from the community along the way, in particular we were rather fortunate to have Blowfish Studios collaborate with us in giving direction, porting, marketing and more.”

Projection bears resemblance to Playdead’s classic indie hit Limbo because of its silhouetted aesthetic. Chu says they knew straight away that it would be compared to Limbo, but he says that they’re exploring different ideas and they didn’t want to avoid the style just because of comparisons.

“We’ve known for a long time that the comparisons would be inevitable,” said Chu. “However, the process actually started with the idea of playing with shadow mechanics which quickly lead to using shadow puppets as the main inspiration. It was at that moment when we realised having a 2D platformer in a black on sepia background would look similar to Limbo, but we feel it’s more important to try stay true to the look of shadow puppetry from Ancient times than deviate for the sake of looking different to Limbo.”