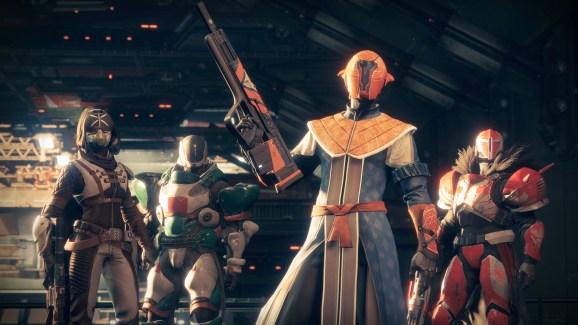 They are putting video games on computers now, which is something scholars once thought was impossible. Yes, this even means you can play developer Bungie’s new online sci-fi shooter, Destiny 2, from publisher Activision Blizzard because the game is now live on the Battle.net app. I’ve booted it up, and I can confirm that it is awesome at 4K and 60 frames per second with a mouse and keyboard.

Destiny 2 first launched only for the Xbox One and PlayStation 4 on September 6, and players have put a lot of time into it on those platforms. But this is the first time that Bungie has released this series on PC, so it is reaching a new audience.

To get Destiny 2, don’t check Steam or anything like that. It is only available digitally through Blizzard’s Battle.net. Destiny 2 is available for $60 through the Battle.net store page — although you can pay more for special versions that come with extra content if you want. This is the first game to appear on the Battle.net launcher that isn’t from Blizzard, the studio responsible for World of Warcraft, Hearthstone, and Overwatch. But Destiny 2 is such a huge game for Activision that it makes sense that it would want to keep that in its own ecosystem — and not give 30 percent of each sale to Steam owner Valve.

While Destiny 2 for the PC is launching into a busy time of the year with Wolfenstein II: The New Colossus, Super Mario Odyssey, and Assassin’s Creed: Origins all debuting this week, Bungie’s shooter is already a monstrous success. It is the top-selling game of 2017 year-to-date, according to the industry-tracking firm The NPD Group. And that doesn’t include a single digital sale for the PC. This should also bring in more players to Blizzard’s app, which will expose people to games like Overwatch, Hearthstone, and more.