Archiact is used to being at the front of virtual reality innovation. It had VR games ready to go during the early days of the Oculus Rift and HTC Vive. And now the independent developer wants to help launch the next wave of mature VR shooters with Evasion.

Coming to Rift and Vive in spring 2018, Evasion is a hectic first-person bullet hell shooter. The sci-fi game takes place on a moon, where you (as a member of a ragtag army) must eradicate a hostile alien species. In addition to fighting with unique weapons and abilities, you can take cover behind various rocks and barricades. But you can’t hide behind them forever: If the barriers take enough damage, they’ll disintegrate.

“You could be ducking behind something and think you’re safe, but then the enemy will destroy your cover and suddenly you have to run somewhere else,” explained senior producer Jennifer Dowding.

Archiact is working closely with Intel to ensure that Evasion takes advantage of the company’s i7 and i9 multi-core processors, so players with high-end PCs can enjoy enhanced physics and special effects. The goal is to deliver a fully featured shooter with all the technical bells and whistles you’d normally expect from a triple-A studio.

In a way, Evasion is what Archiact has been slowly building up to since its formation in 2013. The Vancouver-based company found success early on when it partnered with Western developers to bring their VR titles to China (Archiact also has a branch in Shanghai). That helped them establish a publishing arm that helps optimize games for a variety of VR platforms, including PlayStation VR and Samsung Gear VR. The studio then expanded into original development, creating casual puzzle games, shooters, and much more.

Evasion is its most ambitious project to date.

“We really wanted to design a game for the vocal VR gamers who are looking for something bigger, something that reminds them of the FPS games they love,” said Dowding. 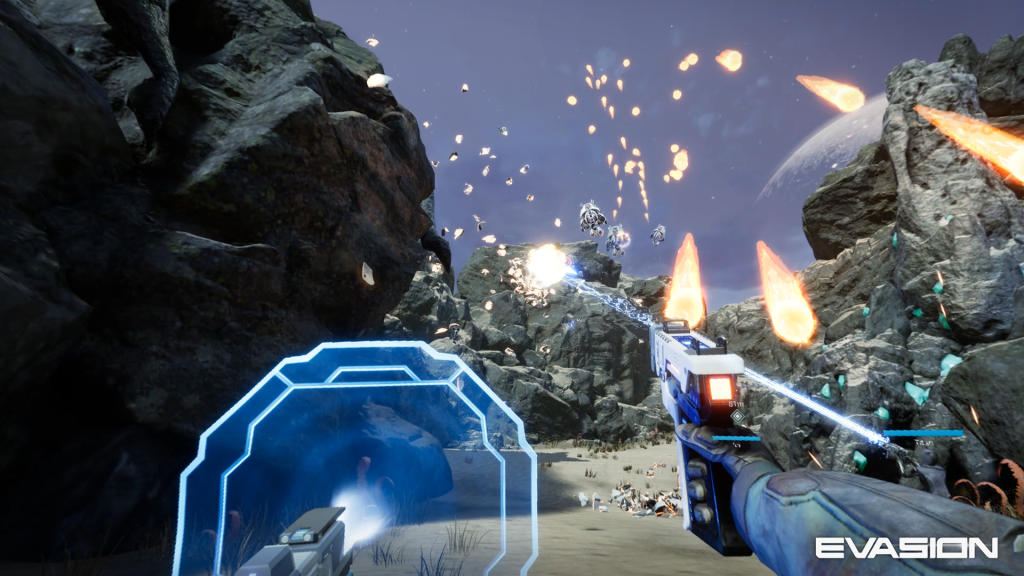 Staying true to the genre

Archiact began working on its cooperative multiplayer shooter more than a year ago. At the time, the team consisted of 12 people who had experience creating multiplayer VR games for the arcade market in China. After a few months and a successful prototype, they expanded to 30 people, taking up half of Archiact’s entertainment division.

One of the areas the Evasion developers wanted to focus on was locomotion. So far, the most common movement method seen in VR is teleportation, where you can just point to a location in the world and instantly transport yourself to that spot. A lot of developers use it because it’s not as nausea-inducing as walking or running — the disconnect between moving in a VR world and what your body is actually doing in real life can be overwhelming for some people.

With Evasion, Archiact wanted players to have the kind of freedom found in non-VR shooters. You can pick from different styles of movement and customize them to suit your comfort level.

“We’re delivering on the promise of free movement that a lot of VR gamers are looking for, but a lot of developers shy away from due to motion sensitivity,” said Dowding. “We have been testing and refining a lot of options for players and we’re really leaning into that. … A lot of the problems with VR shooters in the market is teleportation. It ruins the gameplay.

“It doesn’t represent an authentic FPS experience. We’re trying to make locomotion for everyone, but also have the real, authentic experience of moving around the space.” 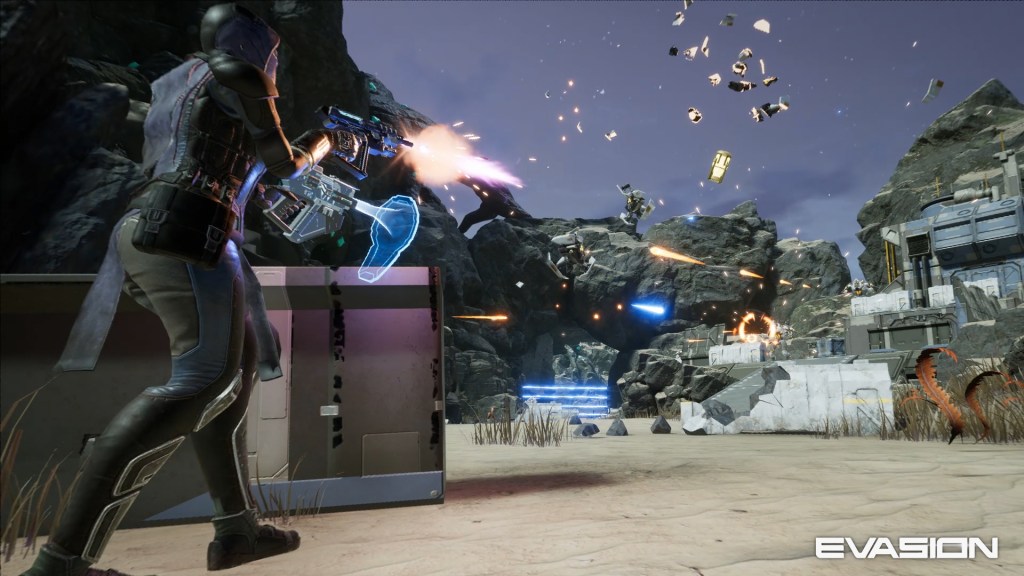 Above: Don’t take cover for granted.

Having that freedom of movement is important because you’ll need quick reflexes to dodge enemy projectiles and help your teammates. While you can play Evasion by yourself, the developers designed it with four-player squads in mind. You can choose from one of four classes. The first two roles that Archiact revealed are the Surgeon (your medic) and the Striker (who can deal more damage than the others). The studio is trying to make it painless for players to join a multiplayer session.

“One of the ways we’re supporting that — because we know the VR community is still growing — is by joining someone else’s match. You can drop-in and drop-out. … We have cross-play on Vive and Oculus as well,” said Dowding.

“Growing” is the key word. Since headsets (and the hardware needed to use them) are still too pricey for mainstream consumers, the VR install base hasn’t grown as fast as some developers and investors expected. However, companies like Archiact are in it for the long term and understand that it’ll take more time for the technology to catch on.

They also recognize that it’s important to feed the existing VR community with increasingly complex experiences like Evasion.

“We’re extremely bullish about the future. You know Unity CEO John Riccitiello’s famous quote? I think he called it the ‘gap of disappointment,’” said head of studio Kurt Busch. “That period in the arc of adoption for VR where the original expectations of investors exceeded where we are on the curve. But we share the same opinion as most people who are actively involved in the platforms: It is a curve that’s going to continue to ramp up.”

“For our team specifically, we’re looking at the market and what’s available there, and what became clear is that there’s definitely a place for high-quality content,” Dowding added. “That’s what the audience wants. That’s really what we wanted to make. Because it’s still a smaller market, it’s all about creating the highest quality content. And you can charge a fair price for that content because when people buy a VR headset, they’re putting in a significant investment. They want to see great titles.”

You can now wishlist Evasion on Steam.