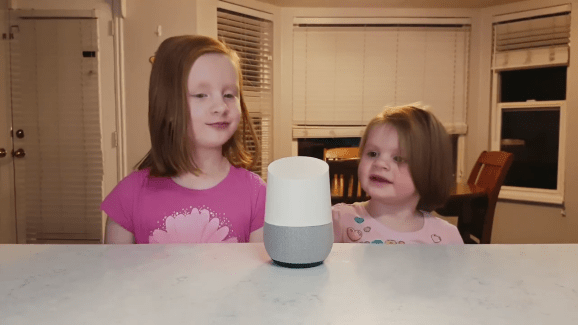 Google Assistant is now able to do things like beatbox, host musical chairs, talk to Mickey Mouse, and play a variety of games made especially for kids. At launch, these new features are only available in the United States.

To play a game, say “OK Google, Abracadabra,” for example, or say “OK Google, let’s play a game” to be introduced to more than 20 games like Mickey Mouse Adventure, space trivia, and Sports Illustrated Kids. Most of the games are for kids, but Lucky Trivia for Families and Family Sports Trivia are made for a broader range of age groups.

Google requires parents to create Family Link accounts for kids under 13 to get unique voice signature identification. Google Assistant is able to recognize up to six unique voices. Developers who make Apps for Families get a dedicated badge placed next to their app icon to tell parents the activity is safe for kids.

Say “tell me a story” and Google will read more than 20 kids stories like the classics Little Red Riding Hood, Sleeping Beauty, and Goldilocks. More modern pieces include The Tired Alien, The Chef Who Loved Potatoes, and The Cat’s Elopement.

Family-friendly apps for the Actions on Google platform, as well as plans to release 50 apps for kids, were first announced at the Made by Google hardware event held October 4 in San Francisco.

AI assistants being able to play games isn’t new — Google Assistant has been a crystal ball reader and game show host for some time now — but games are becoming an increasing part of the battle between Google and Amazon.

Last week at Alexa Accelerator Demo Night, the startup Sensible Object debuted When in Rome, the first board game Alexa hosts. This follows the release of the Gadgets API and SDK by Amazon to encourage developers and hardware makers to create skills and gadgets for Alexa games. Alexa Buttons, the first such accessory from Amazon, is due out soon.

Just as Google released apps for kids today, back in August Amazon debuted its service for Alexa skills for kids with offerings from SpongeBob SquarePants and Sesame Street. Amazon’s skills for kids also require verification by a parent.

Earlier this year, Jeff Bezos reportedly instructed the team at Amazon in charge of Alexa to make more games for the AI assistant, according to The Information.