Monetization in VR is a tricky subject. There are only suggestions, or experiments, on what could serve, but it’s a tough proposition while the industry continues to wade through its hype cycle and content creators remain to be reluctant to commit to creating a steady pipeline of immersive experiences to attract mainstream adoption.

And can you blame them? We should be closer to delivering effective advertising solutions, but we’re not — partly because the current players in the space are busy first building and testing new formats to leverage the full potential of VR as an emerging medium. That entails a lot of trial and error, and consequently, time.

“We want to be sure that we’re doing advertising that is isn’t regurgitating banner ads and 2D video,” Vincent Cacace, CEO and founder of Vertebrae, told CNET last September back when they raised a $10 million Series A. Cacace voices what many of us immediately think when we picture what advertising could look like in immersive environments. We expect to be wowed by dazzling, interactive, and innovative formats that instantly pull us in and compel us to engage with brands in a more playful and deeper way.

Likewise, the folks at Unity, the game engine that accounts for over two-thirds of VR content, point to the exciting paradigm shift at hand for advertisers and marketers. “What will change is how the player interacts with advertisements. People won’t passively watch Unity-created ads; they’ll play with them. “Ads are usually linear,” Julie Shumaker, VP of business development at Unity, told Wired last July. “And there’s nothing linear about VR.”

Too commercial, too soon

We do however see a danger in introducing the next generation of VR ad formats too early, before users have had time to acclimatize to the brave new world of immersive content. These formats can easily be distracting, intrusive, disruptive, and discordant to the host content. They add friction between the user and the content, which can result in a depreciation of perceived value if care isn’t taken.

For this reason, it’s critical that we practice some discretion in how we integrate ads into immersive environments and establish best practices that respect the fidelity and integrity of the content to which ads are merely guests. Otherwise, we can inadvertently contribute to stalling the industry by alienating users with gimmicky formats that can in turn potentially have a negative impact on the morale of the creator community.

We should be asking whether what we’re adding is complementary to the content in terms of category, theme, style, and whether it’s interrupting the experience or not. One example are the current attempts in adding pre-roll and interstitial ads, which is an ad model that has worked well for the apps and HTML5 game markets. The problem here is that these formats might at times only appeal to a subset of users, while annoying others or altogether backfiring in the context of VR.

In shaping our approach, we would do well to listen to the grassroots community of content creators and early adopters. “Developers and users have told us they want to avoid disruptive, hard-to-implement ad experiences in VR,” wrote Aayush Upadhyay and Neel Rao of Google’s Area 120 on a blog post last June. “VR ad formats should be easy for developers to implement, native to VR, flexible enough to customize, and useful and non-intrusive for users.”

We’ve similarly found in working with indie developers during the hackathon we ran earlier this year that advertising in VR is naturally aligned and receptive to a more passive approach that blends together the established models in digital advertising, real-world ‘street’ advertising, and the subtle (or not so subtle) product placements we encounter in television shows, movies, and gaming. The VR ad industry can begin as a natural extension to the advertising industry as a whole.

What’s fundamental above all else is to respect the content and the user journey by seamlessly integrating ads into immersive content in a way that is non-disruptive to the experience. It’s imperative that we don’t break the narrative but instead tag along for the ride.

Do advertisers really need to be wowed by VR ad formats?

At the core of the value proposition for advertisers begins as a passive approach that is not that passive at all. The depth of engagement in VR is unprecedented and with it comes a huge advance in how and what can be measured. The affinity between the user and virtual objects can be tracked fluidly and value can be determined with perfect precision.

In other words, the game changer we’re looking for is already under the hood, and it’s in the form of attention and gaze-tracking metrics that are plugged into the content.

An example of one approach is what we at Virtuleap are calling the Gaze-At-Ratio, or GAR. It’s an algorithm that allows us to calculate and determine the value of a user’s attention to any object, be it a 2D banner pasted on the wall or a 3D object resting on a table. The GAR rate factors in the relative direction, distance, duration, and depth of a user’s orientation to the ad object, which begins to rise the moment an object enters their field of view, and accelerates with proximity and focus. 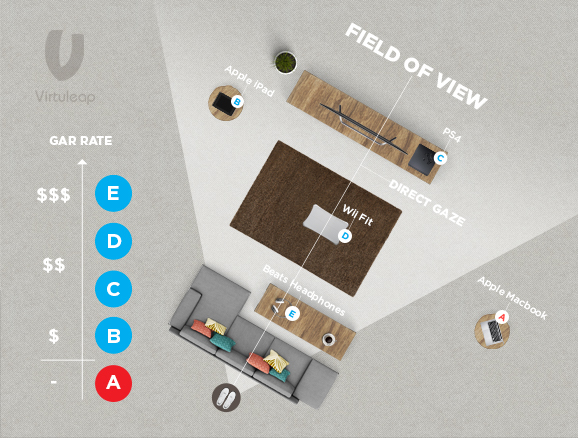 Above: Gaze-At-Ratio as a metric for XR advertising.

As the user gazes at objects more directly and moves closer to them, the GAR rate increases and the value of the impression accelerates. All of this works with a couple lines of code tagged to the object.

The metric starts simple based just on vision alone. Later, it can gradually begin to incorporate more advanced conditions, like object interactivity, eye dilation, heartbeat, respiration, and skin temperature, which can inform us on how to measure a user’s level of engagement that much more precisely. Additionally, the variety of new user inputs, haptic gear like VR suits and gloves, and eye tracking tech, will continually expand the range of possibilities.

Any metric that tracks affinity can also extend into other areas, like informing developers on optimal UX design. It’s not that complicated and it’s not supposed to be. The advertising industry doesn’t need to reinvent itself in order to make sense in the new immersive landscape, or at least just not yet. It just needs to begin where traditional advertising left off. The rest will evolve with time.

Amir-Esmaeil Bozorgzadeh, Thomas Balouet, and Hossein Jalali are cofounders at Virtuleap, a sandbox for creative developers to showcase their WebVR concepts to the world, which recently ran the world’s biggest WebVR Hackathon.