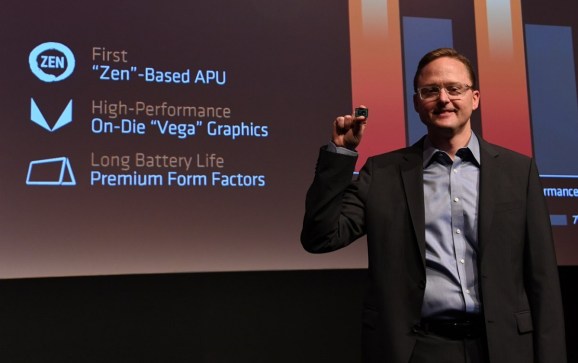 Advanced Micro Devices is cooking up faster laptops by combining Ryzen and Vega, the two ingredients of modern computing, into a single computer chip. AMD is launching two new chips for speedy laptops today that the Sunnyvale, California company says will be the fastest in the world.

The new accelerated processing units (APUs) combine a Ryzen central processing unit (CPU) with a Vega graphics processing unit (GPU) on one piece of silicon. This combo chip is what will make AMD more competitive than rivals like Intel and Nvidia, said Jim Anderson, senior vice president of AMD’s computing and graphics group, in an interview with VentureBeat.

AMD rolled out its Ryzen CPUs as early as March of this year, and it launched its first Vega graphics chips in the summer. With manufacturing advances, it can now miniaturize the features on the chips and shrink them onto a single chip.

Anderson said the new chips will go into thin and light laptops with high performance.

“We said we would introduce real alternatives, choice, and competition for the consumer at the highest part of the market,” he said. “We executed exactly on this plan.”

The Ryzen CPU is based on the Zen architecture, which can deliver 52 percent more instructions per clock cycle than its predecessors. It also has 270 percent better performance per watt.

Acer, HP, and Lenovo are launching new machines with the new Ryzen APUs, which include the Ryzen 7 2700U and the Ryzen 5 2700U. AMD said that the Cinebench benchmark shows that its Ryzen chips fall just short of Intel’s fastest single-thread performance, but that Ryzen is 44 percent better than Intel on multithreaded performance. And at each price point, AMD delivers better performance.

On the 3Dmark benchmark, AMD is triple the performance of the equivalent Intel solution. The Ryzen 7 can run League of Legends at 59 frames per second (FPS), Dota 2 at 49 FPS, Overwatch at 66 FPS, and Quake Champions at 43 FPS. On top of that, laptops built with the chips can have twice the battery life of the previous generation and be 24 percent thinner.

In a statement, Intel said it has scored a lot of customers for its latest laptop chips. A spokesperson said, “There are over 140 design wins using our mobile eighth Gen Intel Core processors with over 80 of them available this holiday season. Some of our customers have already launched systems, ready for the holidays, with great performance, innovative design, and impressive battery life. Designs like the Acer Switch 7 Black, Asus Zenbook 3 Deluxe, Dell XPS 13, HP Spectre 13, Lenovo Yoga 920 and Microsoft Surface Book 2 are just some of the systems available.”