I’d been texting back and forth with my wife for a couple of days when she suddenly goes quiet. Then, I got a call: a voice recording that told me that she’s been taken into custody, she doesn’t know what will happen to her, and she doesn’t know when she’ll see me again — if ever.

And then she was gone.

This is one of the 19 different endings to Bury Me, My Love, a new mobile game that’s based on the real stories of Syrian refugees. A lot of things can go wrong in the thousands of miles it takes to flee to the relative safety of Europe. In Bury Me, you get an up-close look at what millions of refugees have had to go through, filtered through the relationship of a fictional married couple, Nour and Majd.

Bury Me, My Love comes from a partnership between studios The Pixel Hunt and Figs along with a French-German TV channel ARTE. It’s available today on iOS and Android for $3. 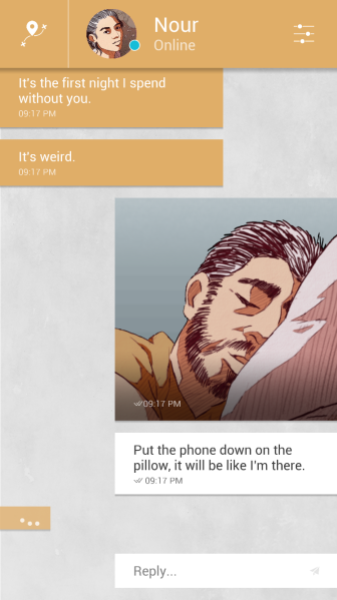 Above: The chat interface is modeled after the popular messaging app WhatsApp.

Bury Me, My Love is text-based both in that there are rarely any pictures and also in that the main interaction is sending text messages. You play as Majd, whose wife, Nour, is embarking from their hometown in Syria on a treacherous journey to Germany. Along the way, they often text each other about everything, such as the state of border patrols or if Starbucks coffee actually tastes good.

Most of the time you’re just reading their conversation, but at key moments, you can choose what Majd says. You’ll advise her on practical topics, such as whether she should spend her limited funds on a flashlight or on medication. It can be tough to make certain decisions because you just don’t get enough information and situations change quickly — a trip across the river can become delayed because of weather, and a border that’s supposed to be open can now be closed. Other times, Nour turns to you not for advice but for moral support. Life is brutal and lonely on the road, and you can choose to comfort her or tell her to toughen up.

It’s not a game that you play all in one sitting; instead, Nour will text you from time to time to initiate conversation. These appear on your phone as push notifications, much like real-life texts from one of your friends or family. It brings an extra layer of realism to the experience, and you start looking forward to her texts. Occasionally, you’ll have to wait longer than usual since she doesn’t have a SIM card or she’s run out of battery. And sometimes, you’ll find out that the worst case scenario has happened.

In one of the endings, I received an audio file of her last words. The reception was poor, so her voice kept cutting in and out. But I could make out the words: She was telling Majd that she loved him over and over again. It was haunting, made all the more so because it’s based on real tragedies. 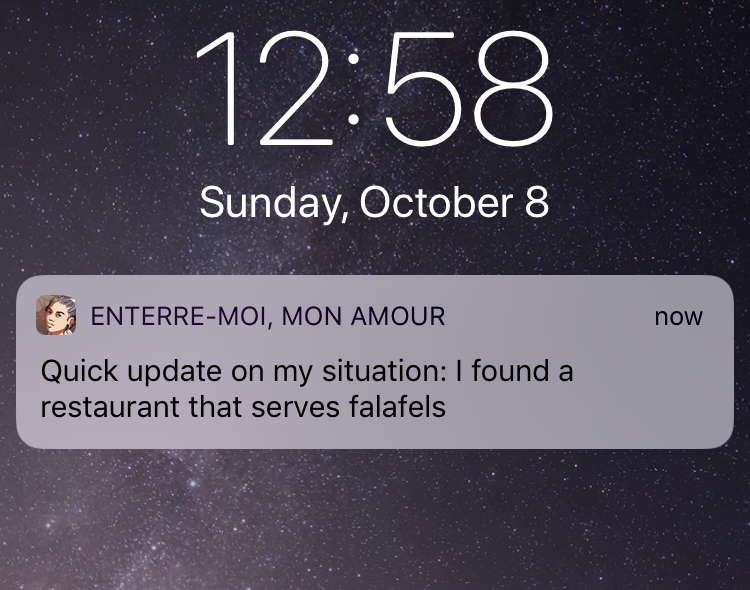 Above: Nour, always ready with a joke, arrives on your lock screen like a text from a friend.

The conversations between Nour and Majd are comfortable and familiar. They banter about everything, poke fun at each other’s quirks, trade selfies, gossip about friends and family, and develop in-jokes throughout the course of the journey. Majd doesn’t have it easy back in Syria either; he’s working two jobs and supporting his family, including his ailing mother. The two bolster each other and try to keep each other’s spirits high.

Even though you’re only reading their text messages, you have a clear idea of their personalities. Majd is bookish, something of a history nerd who loves sneaking in “educational stories” into their conversations; Nour is fun-loving and has a sassy sense of humor. “You just need to find a trustworthy smuggler,” Majd tells her. “How do I do that? Look for five-star ratings on the Smugglr app?” retorts Nour.

They don’t always agree. Majd would prefer that she keep her resources to herself instead of sharing with fellow refugees, while Nour is a former nurse who wants to help others. Occasionally, religion comes up and we learn that she isn’t religious while he is. If she’s already made up her mind about what she’s going to do, there’s no way for him to sway her from her decision.

Nour’s constant state of danger is heightened by how charming she and Majd are. You want these characters to make it out of their situations safely, which makes it all the more heartbreaking when horrible things happen to them.

Starting over and over 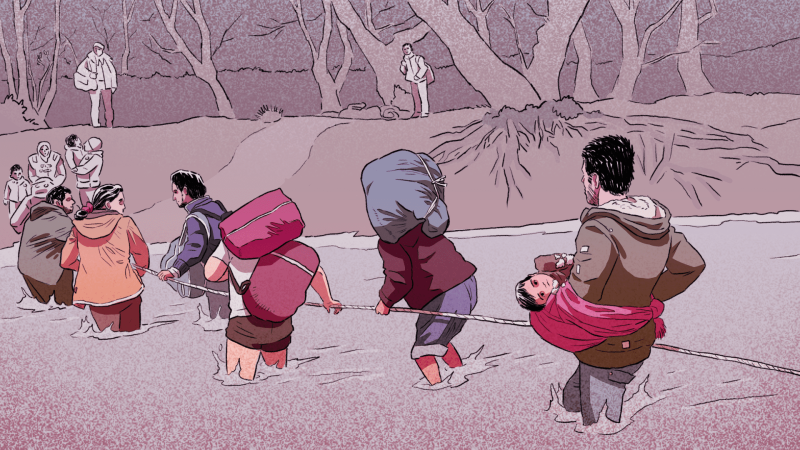 Bury Me, My Love is an extremely replayable game. It’s the kind of experience where you wonder whether one decision could have changed everything thereafter. I’ve played it several times now and gotten a handful of endings, but it can be tough to start over again because there aren’t any save points. You’ll always have to play again from the beginning, which means re-reading the same conversations over and over if you want to get all 19 endings.

Fortunately, it has a “fast mode,” which means that you won’t have to wait for Nour to message you. Their text conversation will continue until you decide to switch over to “real-time mode,” which will spread out their texts once again. However, this is still tedious, and it needs a way to start in the middle without breaking the immersion.

Bury Me, My Love comes from refugees’ actual stories, and the feelings it evokes are just as real. It teaches you about what refugees actually experience without hitting you over the head with it, instead fostering a genuine human connection. It’s an accessible game that feels like you’re simply reading a conversation between a few friends. You’ll laugh at Nour’s jokes and fret over Majd’s decisions. And when Nour stops texting you, tucked safely in your cozy bed with a roof over your head, you’ll find yourself wondering if she’s alright.

Bury Me, My Love is out now for iOS and Android. The publisher sent us a code for this review.