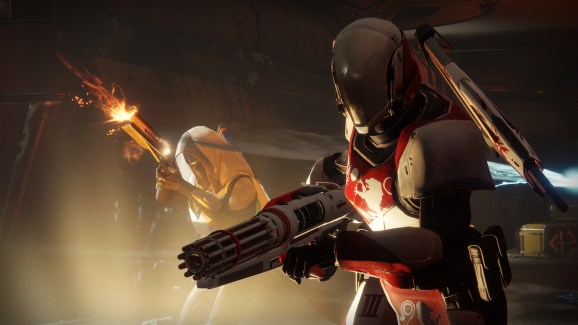 Destiny 2 belongs on the PC.

Yesterday, Activision launched Destiny 2 on PC. The series skipped the platform its first time around, and this time, it’s part of an experiment from the publisher of Call of Duty and other big hits. Destiny 2, you see, isn’t on Steam. It’s on Blizzard’s Battle.net app.

We’re loving it, but we need to spend more time with the PC version to get a better feel for it.

Activision is dipping its toes into setting up its own store for games, as EA and Ubisoft have done for theirs. If successful, it could lead to the publisher ditching Steam and other online retailers in favor of a storefront it controls.

It feels like it’s too late to break Steam’s dominance as a PC game store, and having publishers set up their own shops feels like a drop in the bucket when it comes to competing with Valve’s juggernaut. In fact, I can see some people viewing this as an inconvenience, having to deal with three of four (or more) store apps to get their games running. Right now, I deal with Steam, Battle.net, GOG Galaxy, Uplay, and Beamdog. It doesn’t bother me, but I can see it annoying some folks.

Now, if a new store could come along and help indies break through the noise on Steam, I’d happily use that, too. Is Chrono.gg the answer there? Itch.io? Game Jolt?

P.S. Give High Hell a spin — it’s the shooter where you’re committing a heist against … Satan!

With the holidays approaching at a rapid clip, Valve Corporation’s digital game store Steam unveiled new digital gift cards in addition to those available at retailers such as GameStop and Best Buy. These will enable users to send funds to other users’ Steam Wallet. Users can send a digital gift card using PayPal, Bitcoin, and major […]

Destiny 2 PC players claim Bungie is banning them without justification

The Destiny series has finally made the leap to PC, and you know what that means: cheaters. It’s not that difficult to use tools to “hack” PC games to get an advantage, and that could ruin Bungie’s new sci-fi shooter. The studio is trying to stay on top of that problem by banning players, but […]

AMD returns to profitability in Q3 2017 as Ryzen takes off

Advanced Micro Devices reported a net profit in the third quarter, thanks to the strength of its Ryzen and Epyc series processors that launched earlier this year. But AMD’s shares fell 11 percent in after-hours trading as the Sunnyvale, California-based chip design company warned that it would have lower revenues in the fourth quarter. Still, […]

Double Fine’s fifth annual Day of the Devs indie games festival is coming up. It’s a one-day free event from 1 p.m. to 8 p.m. on November 11 in San Francisco, and it’s presented in partnership with Iam8bit, a production company. This year, it’s showcasing 70 games for folks to try along with live music […]

Bluehole is hard at work trying to get PlayerUnknown’s Battlegrounds out of Early Access on Steam and on Microsoft’s Xbox One console, but that doesn’t mean the company isn’t juggling other ventures. The studio is actually one of the financial backers of upstart capital firm ESDF, which specializes in funding gaming projects. ESDF revealed its […]

Earlier this week EA shut down Visceral Studios, leaving many to wonder about the future of linear, AAA single player games. It’s a complex topic, which is why we’re grateful that we got to sit down and talk about it with Manveer Heir, a 12-year veteran of the industry who worked on games including Mass Effect 3, Andromeda, and Wolfenstein (2009). (via Waypoint)

Day 32 of 100 Days of VR: Learning about Saving and Loading Data in Unity

Hello and welcome back to day 32! Today is going to be an exciting day. We’re going to work on something that we’ve never seen before in any of the tutorials: Saving and Loading data in Unity! Specifically, we’re going to save and load our high score from our game in Unity. (via Gamasutra)

Microsoft’s Windows 10 Fall Creators update is targeting PC gaming cheats with a new feature designed to clamp down on nefarious behaviour. The new TruePlay feature is designed for developers to help them stamp out some of the common cheating scenarios. Microsoft says games enrolled in TruePlay “will run in a protected process, which mitigates a class of common attacks.” (via Trusted Reviews)

The last couple centuries have been hard for explorers. Humans have visited almost all of the places on Earth a thousand times over at this point, and it can feel like there’s just nowhere to go that’s completely new, fresh, and unexplored. But soon, would-be explorers will be able to use a robot to explore the next frontier—the Moon. (via Motherboard)