Cheating is a part of online gaming, but this doesn’t mean people will put up with it — even in something as popular as PlayerUnknown’s Battlegrounds. And the huge number of cheaters in matches of developer Bluehole Studio’s last-person-standing shooter is threatening the fun and viability of this 2017 sensation.

On Friday, I hosted the GamesBeat Family Dinner livestream on Twitch, where gaming-industry folks and their fans get together and play matches of PlayerUnknown’s Battlegrounds. Normally, this is a pretty chill time where everyone makes fun of Iron Galaxies cofounder Dave Lang for never getting any kills. But on this night, through the first four matches or so, every single one of our meaningless custom games had a cheater in it.

How did we know they were cheating? One player racked up double-digit headshots back-to-back. Another player was clearly moving faster than the speed of sound.

It doesn’t matter how they were cheating, though. They were ruining our night, and it was demoralizing. I could sense it from the people I was playing with, and I could feel it myself — we didn’t want to deal with this.

I don’t know who the cheaters were. Our custom games had passwords on them, so it could’ve been someone from the community, but it doesn’t matter. These cheaters are in the game in large numbers, and it doesn’t look like Bluehole is getting ahead of the problem.

I’ve reached out to the company for a statement about cheating, and I’ll update this story with any new info.

In the case of a custom matches, I wish Bluehole would build a ban list into PUBG. In one round, I knew who the hacker was before we started, but I had to kick them multiple times because they kept getting back in. It would be nice to ban them and not have to worry about it.

But cheating is way bigger than custom matches.

Over 322,000 cheaters have been banned from PUBG so far, more than twice as many as posted by @PLAYERUNKNOWN just a month ago.

BattlEye, the anti-cheating service that Bluehole uses for PUBG, says that it bans between 6,000 and 13,000 different account per day. On October 13, it had banned nearly 20,000 within 24 hours.

“The vast majority are from China,” BattlEye said on Twitter.

Banning players isn’t doing the trick, though. Bluehole has since published a blog post about the state of PUBG, and it doesn’t say anything about cheating. But one of the most common problems fans bring up in the comments of that post on Steam is in regards to cheating. 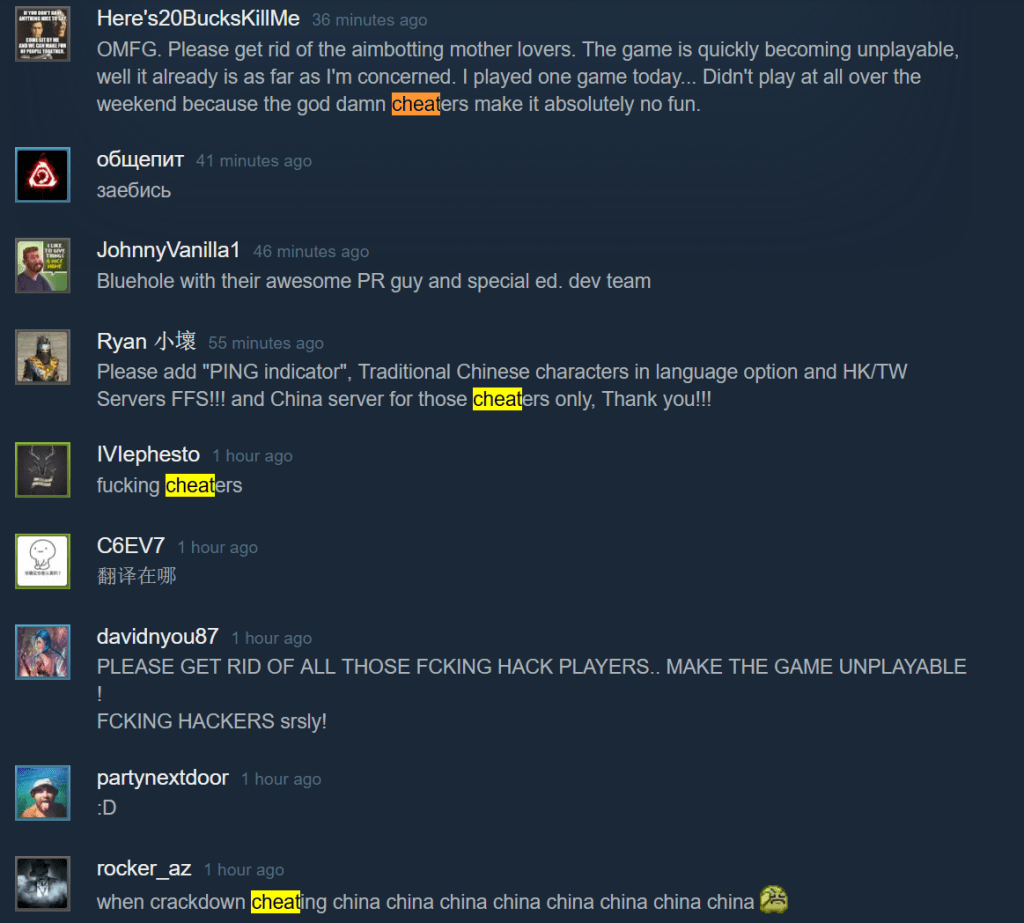 Above: Players are growing impatient with cheating in PUBG.

PlayerUnknown’s Battlegrounds is still in Early Access, but Bluehole has previously said it will release it in a full 1.0 retail state before 2018. That deadline is rapidly approaching, and cheating is a major problem that it should solve before pushing past that milestone. And that’s on top of the work the company has to do to add vaulting animations and to fix bugs and physics.

With the Xbox One version also coming out soon, Bluehole has a lot to deal with. Cheating players, however, is one that is greatest risk to getting me to put down PUBG for good.