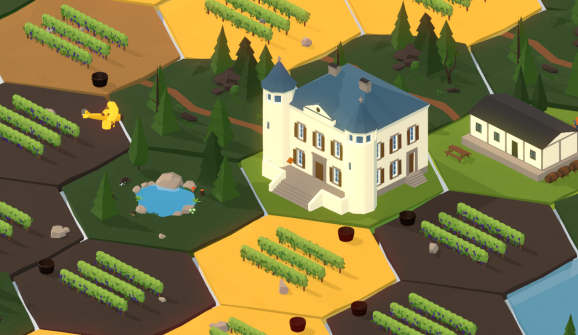 Lots of folks enjoy a glass of good wine, but Terroir offers another way to appreciate the fruits of labor. It’s a simulation game where you can run your own vineyard. It’s developer General Interactive Co.’s debut, and it’s out now for PC and Mac.

Terroir features charmingly minimalistic graphics and an easygoing soundtrack that lulls you into a false state of relaxation. Running a vineyard is actually quite difficult — it’s expensive and you’re subject to the whimsy of the elements and unforgiving critics.

General Interactive’s creative director Mark Fillon says that he’s always been fascinated by the craftsmanship of winemaking along with the history behind the different varieties and regions.

In Terroir, you start with a small plot of land and you can purchase additional tiles to expand your vineyard. There are empty lots that you can use for buildings, lakes that can provide immunity from certain blights that afflict your grapes, and soil types that accommodate different varieties of grapes.

Once you’ve planted your grapes, you’ll have to protect them throughout the seasons, getting them to just the right amount of ripeness. Afterwards, it’s time to actually create your wine by deciding on how you want to crush and press the fruit and how long you’ll age it in barrels before selling it on the market. There are small “side quests” you can opt into, divided into categories Chance and Circumstance.

These can be a boon, like a letter from the mayor saying they’ll be visiting the vineyard shortly; or they can lead to dire consequences, like an announcement that you must donate an absurd number of bottles to military efforts. Things can quickly go sour on your vineyard, and receiving a penalty from failing one of these quests can lead to a game over.

General Interactive is a two-person team: Fillon and lead programmer and developer Jenny Hide. Other folks contributed to Terroir, such as artist Pavel Novák and animator Elliot Padfield, but Fillon and Hide comprise the core studio.

Since Terroir is General Interactive first title, and it launched an early access version in May. Fillon says it was a great learning experience.

“No amount of testing will give you the kind of insights you get from a player base that’s willing to help guide you as you develop a game,” said Fillon. “As game designers, being too close to the game can be very detrimental to its development — you miss too many blind spots. Our players helped address that pitfall by giving us honest feedback and feasible suggestions.”

Most of its players are fans of tycoon games, but Fillon says they’ve also heard from folks that don’t normally play games who are interested in it because of its subject.

“We’re getting emails from educational institutions asking if they could use Terroir in their oenology classes,” said Fillon. “It’s pretty varied, but the game has attracted quite a lot of people associated with the world of wine.”

General Interactive is in the midst of developing another game, and it plans to continue exploring the simulation genre. It will also continue working on Terroir, adding localization and also new features, like the capability to blend different types of wine. Unfortunately, one of those features won’t be a bottle of Cabernet Sauvignon to accompany you on your journey to a successful vineyard. You’ll have to provide that on your own.