Changes are afoot for the Academy of Interactive Arts & Sciences. Meggan Scavio, former head of the Game Developers Conference, became president of the academy this summer, and she has begun talking about her efforts to raise the profile of the game industry’s professional trade organization.

The AIAS puts on events such as the DICE Summit in Las Vegas and the DICE Europe show. It has a charitable foundation that has helped advance the cause of diversity in the game industry. And it has services for members. In an interview with GamesBeat, Scavio talked about what’s coming.

First, the DICE Summit will take place from February 20 to February 22 in Las Vegas under the theme “Made Better.” Registration is now open for the event, which will examine the full spectrum of the creative development process. It will focus on issues like measuring success, balancing innovation and risk, and inspiring individuals to drive change.

The DICE Awards show will take place on February 22, and it will continue as the game industry’s effort to produce a show highlighting the Oscars of video games. Scavio believes the awards have the right foundation, as the final awards are selected by industry peers. Scavio said she would continue to work on how to get the largest possible audience for the awards event. But she might put less emphasis on getting Hollywood talent to be part of the show, and instead will focus on game creators.

The group has a good membership, with more than 30,000 members. Scavio said the goal isn’t necessarily to increase membership, but to do more for them.

“What ended up convincing me to accept the job was the idea of the academy and what it can mean to the game industry. Now I am working for the entire game industry. What I want to do is make sure we include all of the games industry.”

She said that the AIAS could serve mobile game companies and indies better. It could also offer discounts, training, access to events, and other benefits, Scavio said. She also wants to collaborate more with other associations and foundations, including the International Game Developers Association and the Entertainment Software Association. 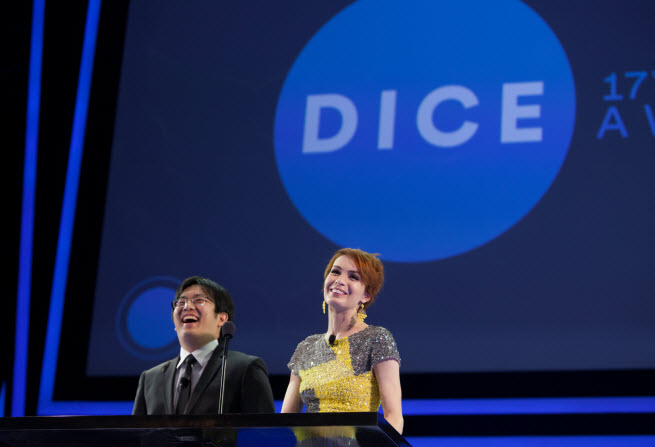 Above: Freddie Wong and Felicia Day at Dice Awards in 2014.

“Diversity has always been really important to me,” Scavio said. “I am making changes to how we handle peer panels for awards. And I want to focus this year’s awards on the craft and creation of the games, and how we can take more risks in the way games are made.”

For instance, she doesn’t believe there is a shift away from single-player games, given the big success of titles with single-player versions. But Scavio believes that new types of games — such as those that might last two hours — should also be explored.

As for speakers, she said, “We are taking submissions for anybody who has a great story to tell.”

Scavio replaced Martin Rae, who left in September 2016 to take a job in the virtual reality industry, as well as Mike Fischer, who joined as interim AIAS head in the spring.

The DICE Summit will place at the Mandalay Bay and Delano hotels in Las Vegas.