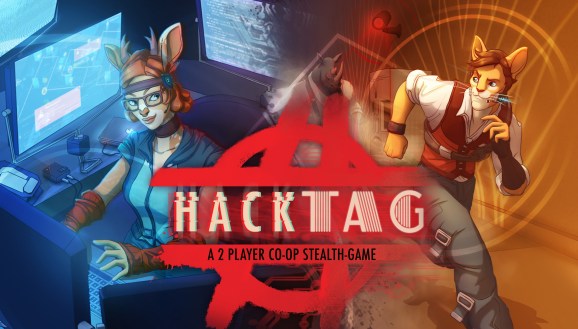 Hacktag from Piece of Cake Studios.

Hacktag is an asymmetrical co-op game about infiltration and industrial sabotage in an alternate universe where all the people are animals. Both online and local multiplayer are available, and the levels are procedurally generated. It’s the debut of French indie studio Piece of Cake Studios, and it entered early access on PC in June earlier this year.

It’s the year 2029, and you and your partner are charged with breaking into big corporations and stealing data. To do so, one person takes the role of the field agent, and the other is the hacker. I played a few rounds with Piece of Cake cofounder Bérenger Dupré at the independent festival IndieCade earlier this month. We traded off as field agent and hacker, and each role had parallel obstacles and abilities.

“I like to say that you’re going to be Tom Cruise, and I’m going to be Simon Pegg — like in Mission Impossible — and we’ll yell at each other during the mission when everything doesn’t go right,” said Dupré while we played.

You’re both on the same map, but the field agent physically roams around and sneaks past guards while the hacker moves along electrical lines inside the walls and hides from patrolling antiviruses. As the hacker, you have to unlock electronic doors for the field agent, and similarly, the agent has to hack firewalls so that the hacker can move freely to a new area. It also has minigames in which both players have to work together to move on.

Above: Local co-op with the field agent on the left and the hacker on the right.

Hacktag has three different levels right now, each based off a real corporation. Dupré says that Piece of Cake enjoys poking fun at companies, but there’s also a deeper story where you can decide what to do with the data you’ve stolen. For instance, you can decide to become a whistleblower, or you can simply sell the data for cash.

“For the final game, we’ll have a story mode with nine different stories, three for each corporation,” said Dupré. “When you play with a partner, you won’t have the same story. You’ll follow your story and the story of your partner. The funny thing is, each story — each corporation has their own policies and their own secrets, but you’ll also meet your own unique NPCs.”

Hacktag doesn’t feature any combat. Instead, it’s more about stealth. If one of you is caught by a guard or an antivirus, you’ll be sent to a holding cell. Your partner has a limited amount of time to come rescue you, and if they fail, then the mission’s over.

Piece of Cake is a 10-person studio that plans on only creating co-op games, which Dupré thinks are making a comeback. He says that there’s simply demand for those types of games and that they’re in part responsible for the success of the Nintendo Switch, which recently added charmingly cartoony titles like Overcooked and Lovers in a Dangerous Spacetime to its catalog.

Hacktag also has a colorful aesthetic with animals instead of humans. Dupré says that they decided to go for that look because it’s more welcoming for a broader demographic.

“We decided to make it like that because most of the time, stealth games are all about white dudes with guns,” said Dupré. “It’s really militaristic, really heavy, really dark. Or, it’s ninjas or hitmen. We liked the idea of a game that’s fun for couples to play together, for cooperative gamers, or even a dad who plays Lego games with his kids and wants to play a more hardcore game — but still with his children.”