It was with some confusion that I walked into a bustling lumberyard on the London outskirts of Wimbledon yesterday afternoon. Syren developer Hammerhead had promised something amazing to show me, but as I walked past lorries shifting materials and workers digging into fry-ups, I’d begun to wonder exactly what could be so spectacular. Then, like stepping through a portal into another world, I stumbled into Europe’s amazing new volumetric capture studio, Dimension.

In a huge room in a corner of the park sits this colossal new rig, assembled with the help of technology innovation center, Digital Catapult and built to Microsoft’s mixed reality specifications as seen in its own Redmond and San Francisco studios. Hammerhead is operating the rig, which clients can rent out to record content for whatever experience they may be building. This makes Hammerhead the first Microsoft mixed reality capture software licensee in the UK.

Volumetric Capture is an immensely promising means of digitizing humans for VR and AR. Using a large number of cameras — 106 in this case — an actor or artist’s performance can be captured at extremely high resolution, and then digitized as a 3D asset that can be dropped into any kind of experience from VR and AR to standard 2D video or 3D playback on tablets.

The result is character models that approach photorealism not just in facial expressions and animation but even down to details like the way clothes fold as you move even subtly. As I’m given a tour of the studio, I see several made-earlier examples of this; ballerinas that twist and twirl with all the elegance of a live performance and up-close character monologues that capture the intricate details of everything from the squint of an eye to the crease of a finger. On a 2D touchscreen I can drag the 3D model around during playback just as I would any other asset, and in VR these character models will appear almost life-like, save for the presence of a few artifacts that give assets a Google Earth VR-like texture, though this can be reduced. You’ll get to see some of what’s possible with this method of capture in the new Blade Runner VR experience releasing on the Oculus Rift and Gear VR this week, which Microsoft helped out on.

Like other rigs, Dimension is circular, with performers standing in the middle of the area, drenched in bright lights and surrounded by eight microphones and cameras lined along pylons starting at the floor and reaching all the way up to cover the roof. Just outside of the rig is a space the performance is streamed to on a TV (captured on a GoPro hidden inside the setup), and various computers and machinery are nestled away behind a desk on one end of the room. The lighting is purposefully flat, meaning it’s easy for studios to implement their own lighting effects to fit a virtual scene later on, though it can also be adjusted during the performance if you know the exact conditions you want to create.

The rig can be scaled, meaning it can be widened to capture a larger area, or even brought closer in for more detailed performances. Crucially, though, it’s meant to be affordable and accessible. Now that it’s all built, running and maintaining the rig isn’t hugely expensive so, while I’m not given an exact figure, Hammerhead and Microsoft assure that anyone from moderately-sized indie studios to larger corporations can use the rig. 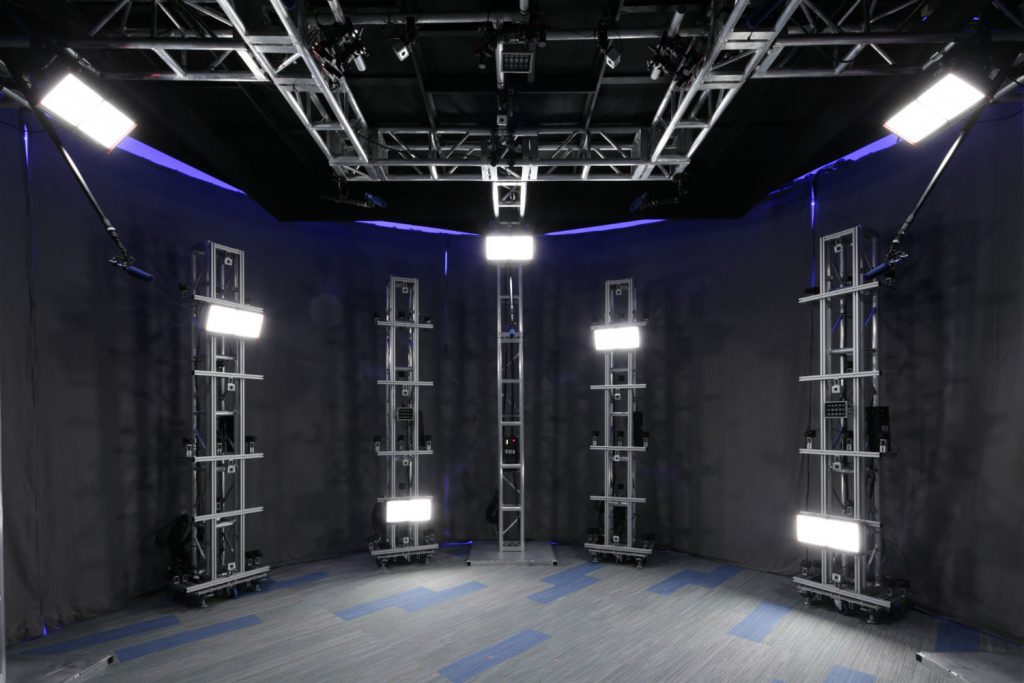 Above: A capture room at Dimension.

You’ve likely already thought up a few ways in which this type of content could enhance your favorite games and movies in VR, but Digital Catapult, Hammerhead and Microsoft are actually more enthusiastic about other, less obvious applications. In healthcare, for example, you can capture highly-detailed scans of a patient’s injury for assessment training. It’s even being used to train doctors in saying no to demanding patients that are begging for antibiotics. It seems like such a niche concept, but if this type of capture can really touch upon subtle social anxieties like this then the potential use cases are far, far broader than you might initially consider.

Volumetric capture isn’t quite the answer to all of VR’s problems, though, at least not yet. It’s great for recording performances for sure, but there’s a lot of work to be done to apply this kind of capture to dynamic, AI-controlled virtual characters that can follow you on an adventure. Microsoft says it’s doing some work in this area, but I wouldn’t expect any breakthroughs soon. There’s also small problems with capture if, say, two people are hugging that will leave small visual blemishes.

But even with those issues on the table, I’m still amazed something as advanced as Dimension is being made available and accessible to others this early on. This isn’t some fancy showcase of technology that one day may revolutionize VR, nor is it an expensive PR stunt or developer kit that may never see the light of day. Instead, it’s a genuine tool that content creators can consider for use right now; Hammerhead says it’s already got shoots booked for November, with initial customers including Sky VR. The company sees this as a hub for Europe in general that customers will travel for, and it’s easy to see why.