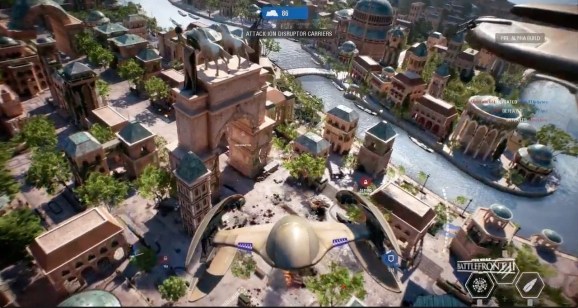 The view from above in Theed map for Battlefront II multiplayer.

Electronic Arts and DICE are making some changes to how loot boxes and progression work in Star Wars: Battlefront II. This comes after a beta test for Battlefront II caused some backlash from fans. Critics voiced concerns that players could spend money to get advantages in online multiplayer, and that led to a lot of angry reactions on message boards and YouTube.

Based on the beta, some players worried that a person with unlimited funds could purchase crates until they unlocked all of the most powerful Star Cards, which are perks that improve your character’s abilities. That setup could lead to a pay-to-win scenario, which is something that gaming fans have had little tolerance for in the past.

But EA says it has heard that response.

“The beta gave us a welcome chance to test all of our systems in action and tune things up for better balance,” reads an EA blog post. “A few weeks back, we mentioned we were going to take another look at how the progression system works. After incorporating feedback from the beta, we’re happy to share our plans for launch.”

Here is how EA describes the changes (emphasis is the publisher’s):

I am going to get my hands on Star Wars: Battlefront II soon, and I’ll see if these changes help the final product.