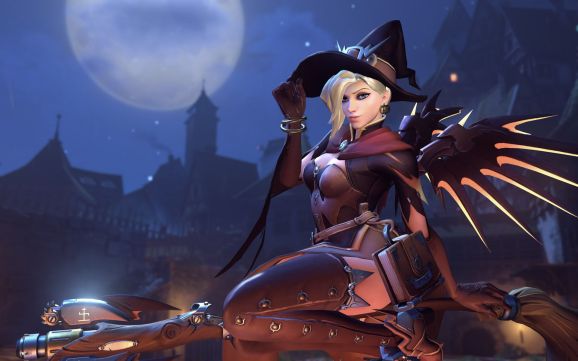 Humble Monthly subscribers are getting Overwatch just in time to spend a ton of money trying to get this Witch Mercy skin out of loot boxes.

Mercy’s reign of terror might be coming to an end. Blizzard has pushed a new update to Overwatch’s PTR (public test realm) server, which it uses to try out upcoming changes to its hit team-based shooter. It includes a damage increase for Ana, the healer/sniper, and a nerf to Mercy, the only character who has the ability to resurrect dead allies. She now has a short cast time on the move that enemies can interrupt.

Mercy has been a problem for Overwatch. Her Resurrect ability used to be her Ultimate, meaning she could only use it after filling up a charge meter. It would bring back all nearby dead teammates to life. Many thought this mechanic was unfair and unfun, as Mercy players would often hide out of sight and wait for their team to die so they could use the move.

In September, Blizzard turned Resurrect into a regular ability. It can now only revive one ally and has a 30 second cooldown, so players can use it more often than an Ultimate move. Blizzard gave her a new Ultimate, Valkyrie, that temporarily puts her in en enhanced state where she she can fly, heal and damage boost multiple allies, have unlimited pistol ammo, and gain an extra charge on her Resurrect ability.

But the new Mercy has also proven problematic. Her new Resurrect, which only has a 30 second cooldown, can have a huge impact. Although she can’t revive multiple players at the same time, she is still able to undo a lot of enemy kills. It has become expected to see a Mercy player on both teams in almost every game.

Her popularity meant that the other three healers became used less often, especially Ana. The sniper most often competes with Mercy for the role of the main healer. She can quickly use her gun to bring a hurt ally back to full health. But she just can’t compete with Mercy’s Resurrect.

In the new PTR patch, Mercy’s Resurrect now has a 1.75 second cast time, during which she moves 75 percent slower. She used to use the move immediately. That may seem small, but becoming an easy target for even a little under 2 seconds can be dangerous in Overwatch. Enemy players can also now interrupt the ability with moves like McCree’s Flashbang or Ana’s Sleep Dart.

Speaking of Ana, her damage buff once again makes her more of a hybrid character. She’ll now have an easier time killing enemies, including Mercy and the rocket-shooting flier, Pharah. That bit of extra damage could help make her a relevant pick again.