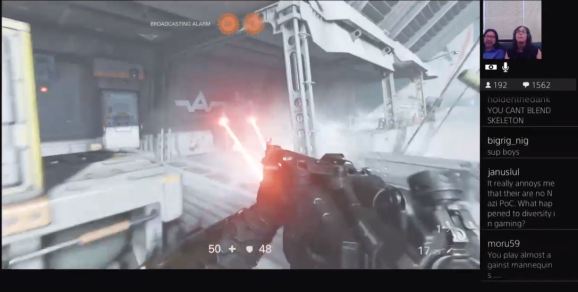 Video game developer Brianna Wu is running for Congress, and she’s using a new way to get her message out: killing Nazis in Wolfenstein II.

Yesterday, the CEO and cofounder of the Giant Spacekat game studio used a livestream of Wolfenstein II: The New Colossus to help raise money and awareness for her political campaign to unseat Representative Stephen Lynch (D-Mass.) to represent the 8th Congressional District. While fundraising may be an age-old practice for those running for office, the method that Wu used is: livestreaming a video game.

“I’m not aware of it happening in the past,” a Twitch spokesperson said.

“Nope,” Lessig said in an email.

A DNC press rep said they weren’t aware of any of their candidates using Twitch in this manner. The RNC did not respond as of this writing.

Wu said that she’s turning to livestreaming because that’s where young voters are.

“One of the reasons Millennials feel disenfranchised is politicians don’t speak to them in ways that feel genuine,” said Wu. “Twitch is one of the most important ways to engage younger people. I plan to go to voters where they are, not asking them to come to me.”

The Pew Research Center also didn’t have an answer on if using video game livestreaming could help reach the Millennial audience.

“Unfortunately, we do not have any relevant data on this particular subject at this time,” Pew’s Haley Nolan said in an email. “We have this report about gaming and gamers, but no research that examines video games and political advertising together.”

This isn’t the first nontraditional ad from the Wu campaign. Earlier this month, it published this video of Frank Wu (the candidate’s husband) as he “smashed” the message into a parody of President Donald Trump.