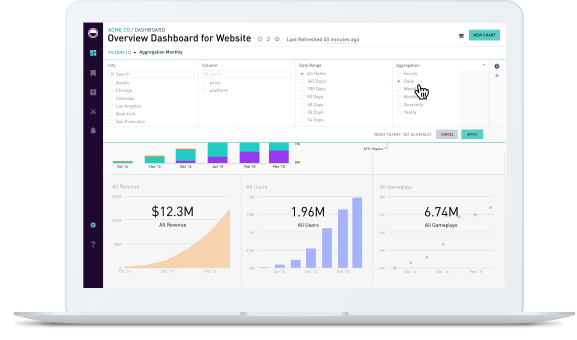 Periscope Data is trying to make it easier for data teams to process large amounts of information from across their companies with a new cloud data warehouse service that the company announced today.

The Unified Data Platform is designed to provide a single source for companies to perform data processing, analytics, and visualization, which is important for generating insights from the information that’s tied up in business systems.

It’s supposed to solve a key problem: While companies have plenty of data about how their business is doing, it can be hard for analysts to reason over all of it, owing to a series of technical silos that makes collating and processing all that information difficult. Periscope Data’s new product helps fix that by bringing all of a company’s data into Amazon Web Services’ Redshift database.

Once the data is loaded in, teams can query the information using SQL, R, and Python. Periscope Data’s software is also able to provide visualizations in the form of both reports and dashboards. According to Periscope Data CEO Harry Glaser, this whole system is supposed to replace the existing approach to building data warehousing and analytics capabilities, which often requires chaining together multiple software packages.

“Generally speaking, if you’re a data team and you’re getting up and running, what you will do is assemble a platform out of various siloed products — some of them B2B products, some of them open source or consumer products — and then stitch them together with spit and duct tape,” he said in an interview with VentureBeat.

That causes a problem, though, since companies will then need to pay engineers to maintain that platform in order to keep their entire data processing regime working. Glaser said that the Unified Data Platform is designed to fix that.

In addition, having one unified platform means that it’s possible to see how changes to data affect an entire system, so companies can see what reports would be affected when a particular information source is shut off, for example.

Customers will get billed for the Unified Data Platform based on how many people use the software, as well as how much data they have stored within the data warehouse. When all is said and done, it will end up costing customers tens or hundreds of thousands of dollars per year, according to Glaser.

Glaser said that he could see a future in which customers would be able to select from different cloud platforms and different database engines in order to match the performance characteristics that they want. But that’s still a ways off. Right now, Periscope Data is quite happy working with Amazon, which was a partner for this launch.

What’s not on the table is an on-premises version of the Unified Data Platform. Glaser said that the company is remaining focused on serving only customers who want to have their information in the public cloud, since that’s where the market is headed, in his view.