Call of Duty: WWII debuts on the PC, PlayStation 4, and Xbox One on November 3. We got an early look at the game at a review event, and we recorded footage of the opening battle on D-Day. Operation Overlord was the most dramatic event for the Americans in the war, and Sledgehammer chose to open the single-player game with a bloody scene of the carnage on Omaha Beach.

Sledgehammer chose to focus on a historically accurate setting for Call of Duty, taking the game back to its origins. The game is one of the most anticipated for the coming the holiday season, according to a study by Nielsen research. The Call of Duty franchise has sold more than 250 million units and generated $15 billion in sales since 2003. On average, that is more than 17 million units and $1 billion worth sold per year.

Selling any less than that in a given year is considered a failure, according to Michael Pachter, an analyst at Wedbush Securities. Call of Duty: Infinite Warfare and Call of Duty: Ghosts were weak performers. At the high end of the spectrum was Call of Duty: Black Ops III, which sold 26 million units, and Sledgehammer’s own previous title, Call of Duty: Advanced Warfare, sold 22 million units, Pachter said.

(Here’s our posts on Nazi Zombies and War mode and R&R). 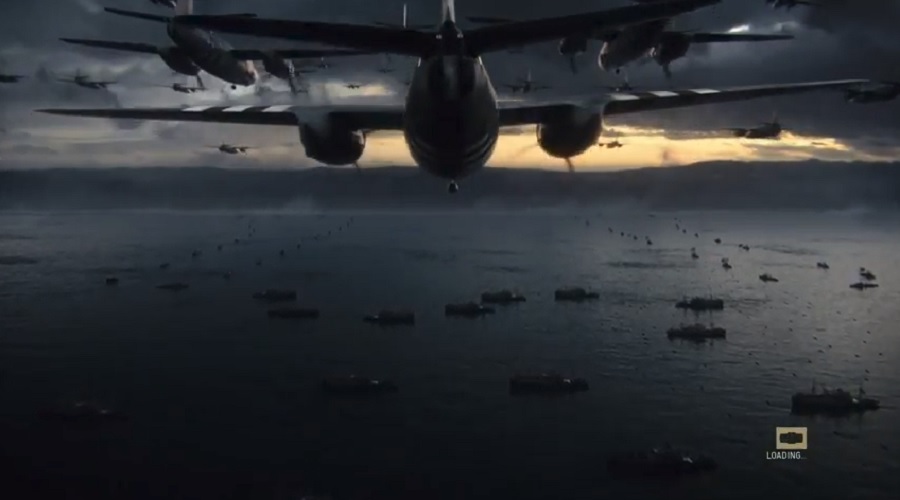 Above: The D-Day landing in Call of Duty: WWII.

This initial footage is from a review copy provided by Activision, with gameplay set on Hardened. It shows the landing on Omaha Beach, focused on a squad of soldiers in the Fighting First (1st Infantry Division of the U.S. Army). You play as Ronald “Red” Daniels, a private from Texas. From the very start, you see that the theme focuses on brothers in arms. You don’t go into the battle with a weapon. You have to pick up a Bangalore torpedo and use it as an explosive to blow up the wire for your fellow soldiers. Daniels clears the bunkers and trenches, and then gets into an intense struggle to save one of his comrades.

The scene conveys the horror of the D-Day landings, and you’ll see that the horror of the World War is something that the developers at Sledgehammer Games wanted to communicate. Sledgehammer did its homework when it comes to the historical accuracy. The 1st Infantry Division beached their landing craft at the eastern half of Omaha Beach and hit intense fire from the entrenched German 352nd Infantry Division. At least 2,000 were killed, wounded, or missing among the Americans. But thanks to the bravery of soldiers, the German defenses were overwhelmed and the D-Day landings were ultimately successful. Sledgehammer’s research, which was aided by historian Marty Morgan, paid off in the highly realistic scenes below.

Here’s the opening cinematic. I like how it starts with a focus on the squad, and then zooms out to reveal the epic nature of the invasion.

Here’s the initial landing battle on the beaches of Normandy. I found it quite hard to find the path to safety, and that is part of the point.

Here’s the second part of the opening battle where you clear the bunkers on D-Day. This is the easy part of the work, but it is also quite dramatic.

And for the sake of comparison, here’s a video of the landing at Pointe Du Hoc from Call of Duty 2 in 2007. Call of Duty: WWII is available on November 3 for the PC, Xbox One, and Playstation 4. The publisher provided GamesBeat with a copy of PS4 edition of the game for this review, and I attended a review event.