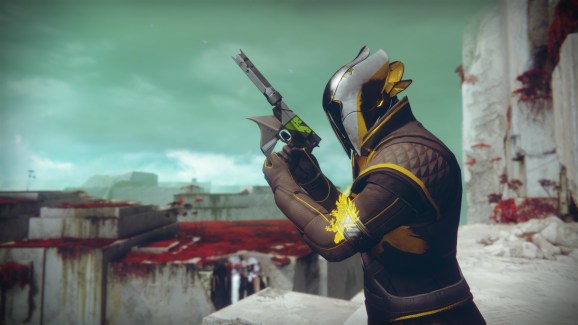 Getting ready to shoot a used game.

Activision is starting to make a dent in the industry’s war on used games, and its biggest weapon in that fight is the always-online live-service shooter Destiny 2. The publisher revealed today that digital accounted for more than 50 percent of the copies of Destiny 2 sold through to console customers. That’s a huge jump from the Xbox 360 generation where digital sales on consoles represented an average of around 10 percent of all copies sold.

“Launched in September, Destiny 2 is the best‐selling console game year‐to‐date in the U.S.,” reads Activision’s Q3 earnings report. “Digital mix was over 50 percent of console full-game sell‐through, a new record for the company.”

Digital games have a handful of benefits for both players and publishers. Players can have the game installed and ready to go right when something like Destiny 2 unlocks. They can also always have the game on their hard drive if they want to go back after putting something else in the disc drive.

For publishers, digital sales save some money on printing discs, storage, and shipping. Players also can’t trade in their used copy of a digital game to a retailer like GameStop, which would then resell the second-hand Destiny 2 without any additional revenue going to Activision.

This also means that retailers sell fewer packaged copies of Destiny 2 if people are choosing digital at a higher rate, but that doesn’t necessarily cut GameStop, Walmart, and Target out of purchasing process. Many people who buy games digitally do so using gift cards. Amazon and GameStop even sell digital game codes to consumers who want to pay with cash. While most credit-card consumers are just buying the game through PlayStation Network and Xbox Live, a significant number of people still prefer to use paper currency when shopping.

Regardless of how people bought Destiny 2, the big news for Activision is that they bought and then played the hell out of it.

“Activision and Bungie’s Destiny 2 is well ahead of the highly engaging original Destiny on time spent per player and attach rate to the expansion pass,” reads Activision’s earnings release. “With the launch of the game on PC [on October 24], Destiny 2 is now ahead of the original game in consumer spend.”

So, yeah, Destiny 2 is hitting all of the big bullet points of games-as-a-service. It’s selling hyperfast overall, it’s selling digitally, and it’s generating revenue from add-on content. You can see why other publishers are looking at Bungie and Activision with envy and plans to launch Destiny-like games of their own.