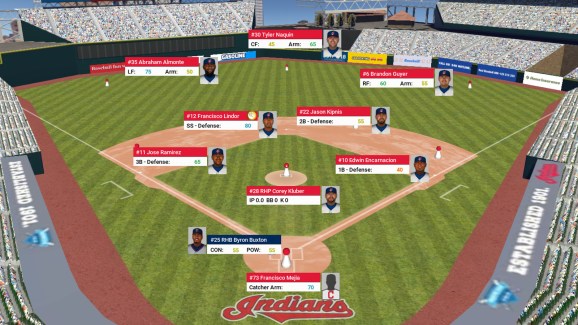 Out of the Park Baseball 18 in action.

Baseball is math. It’s all about counting hits, slugging percentage, on-base percentage, and everything else a team needs to score more runs than their opponents. The numbers-based nature of the MLB has made it an ideal fit for the Out of the Park management sim, which debuted almost two decades ago. The OOTP Developments has grown its game’s appeal over the years by refining the simulation to the point that statisticians on MLB Network and FiveThirtyEight regularly use it to make predictions. That has led to a regular and reliable following of loyal fans who buy the new Out of the Park every year.

That core group of players enabled OOTP to go reach out and acquire the official MLB and MLB Players’ Association licenses to add real teams and players. That has attracted even more fans, but it has also cut into the companies bottom line — and that has the studio looking for ways to build more live services into its games.

“With the license with MLB and the MLBPA for the baseball game, and also more recently with the NHL for our hockey strategy game, that introduced a new cost structure,” OOTP Developments chief marketing officer Rich Grisham told GamesBeat. “We’re paying licensing and marketing costs that are significant, and so moving forward, we’re not just looking at the current gaming landscape and how the economics have changed, but what that means to us now that we have much higher bills to pay.”

But Grisham doesn’t see those higher bills as just a burden. For him, this is a challenge that creates an opportunity to shake up and potentially grow OOTP Developments.

Out of the Park Baseball and Franchise Hockey Manager put you in the role of general manager and manager of a professional sports team. You decide how to spend your budget, which players to sign, and who to start, and then the software executes the actual matches to figure out how your decisions played out. Since 1991, OOTP has sold its games as products (for $40 this year) that people download, install, and run on their machines. They don’t have any live, cloud-based capabilities, and that is where Grisham spots a major opportunity.

“Just taking [our game] online, through a browser, isn’t necessarily the right way to go,” Grisham told GamesBeat. “But the ability for people to be able to potentially play their friends head-to-head online, for example, is something we can’t do right now in real time.”

“[We want you to be] able to compete in a league with other people in ladders, moving up the ladder and being able to differentiate yourself that way,” he said. “These are things that are not options we really had in the past. We do have online leagues in our baseball game, but it’s a throwback, like a lot of our stuff. Baseball is a 150-year-old game. In some ways our representation of baseball has a little bit of that throwback mentality in it.”

But that mentality turns off a lot of potential fans, according to Grisham. People might like the idea of a hardcore baseball or hockey sim, but downloading and executing a game like that is foreign to a lot of people who do everything through the web or their smartphone.

“When people find out about Out of the Park Baseball, the reaction is typically like, oh, I don’t just go to a website and play this online,” Grisham explained. “I have to download this to my computer? It’s amazing how, over the course of a couple years, that’s changed.”

So OOTP is experimenting and thinking up ways for people to engage with its two sports sims without requiring a download. It isn’t announcing any specifics about how that might work for now, but the company is looking around at what other games are doing. At the same time, the studio doesn’t want to screw up something good for its regular fans. The player reviews for Out of the Park Baseball 18 on the Steam PC gaming service are 92 percent positive. That’s worth a lot to OOTP, so it doesn’t want to lose those people because it is chasing after another crowd.

“The No. 1 thing we have to do is make sure our core fans, who have been with us for close to 20 years, remain with us,” said Grisham. “That’s absolutely the most important thing.”

That means those fans can likely expect Out of the Park Baseball 19 and a new Franchise Hockey Manager next year. More than that, Grisham isn’t even really interested in finding ways to squeeze more money out OOTP’s current superfans.

“I don’t really think there’s enough number of those guys who would just start throwing money at [some live service],” said Grisham. “I consider them just the fans of our game who love baseball, love what we do, and appreciate the fact that we operate the way we do. Where I think the real opportunity is, in addition to those guys, is to reach the kind of people who are not the traditional Out of the Park Baseball fans — more like the strategy game fans and video game fans who are of a newer generation, who’ve grown up on more live services and online experiences that are very customized and tailored to what they want to do.”