GamesBeat: The new map, Blizzard World, is a theme park based on other Blizzard games like Warcraft and StarCraft. So Blizzard is canon in the Overwatch universe?

Kaplan: It is! Or, well, it already was. D.Va was a pro StarCraft player. Blizzard existed. Now, Overwatch is not a part of the Blizzard canon. That would be super weird. But Hearthstone exists, Warcraft, Diablo, StarCraft, Heroes of the Storm, they all exist in the Overwatch universe. 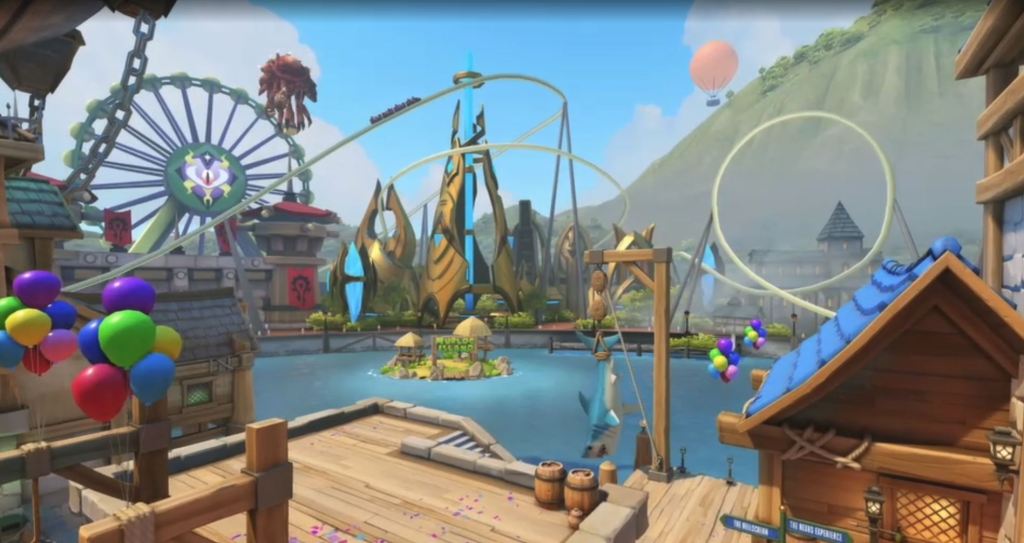 Above: I’d go to Blizzard World.

GamesBeat: I see a little bit of Walt Disney World. I even saw a Jaws reference, to the old Universal Studios ride. Are you drawing from a lot of different theme parks for these ideas?

Kaplan: For me personally, growing up in Southern California — Team 4, the Overwatch team, the development team behind the game, we’re stationed here in Orange County. We have amazing theme parks all around us. There’s no point in working on all these great properties if you don’t stop and think about, “What would it actually be like?” Can you imagine the theme park where you walk in through the gates of Stormwind, but then there’s a StarCraft Nexus right across in the next area? I don’t know if they’ve shown it yet, but we have this awesome map — we did a map of Blizzard World. I think they’re going to sell a lithograph of it here at the show. But it’s really cool. It’s just a fun fantasy experiment to do. If you really love these universes, could you imagine what the theme park would be? The Overwatch team doesn’t build theme parks, but we do build maps, and we said, this could be it. Let’s show everyone how cool and how fun to play in the environment it could be.

GamesBeat: Do you make geometry for a level and then think about what to theme it with? Or does the theme idea come first, and then you start putting in the blocks that become the map?

Kaplan: This map was built by our assistant game director, Aaron Keller. Aaron — it was actually one of our concept artists, Peter Lee, a long time ago he drew this picture. But it showed that shot at the gates of Stormwind as a theme park. Aaron Keller fell in love with that. Aaron is an amazing world builder. He just convinced the team. This would be the most killer Overwatch map ever, we have to do it.

The amount of love that the team poured into this — every little detail — I can’t wait for people — they have it here to play on the show floor, but I can’t wait for it to go up on the PTR next week, because then they can just run around the empty map and explore. You can shoot those drones out of the sky. Even the little balloons. The balloons, if you shoot the strings, they start floating up, and if you shoot the balloons themselves, they pop. But all the little Blizzard Easter eggs — we have the voice actors. Deckard Cain is all over this. Uther. The Adjutant from StarCraft. We have all these little sound triggers. The actual actors from the other properties — it’s really fun.

GamesBeat: A lot of people talk about Hanzo’s Scatter Arrow, complaining about that. As a Hanzo main, I’m always worried you guys will hear that feedback and nerf it. You talked about this before — maybe Scatter doesn’t feel great to die to, but it’s not like Hanzo is in an overpowered state right now.

Kaplan: I don’t think there’s a world where we remove Scatter Arrow without doing significant other changes to Hanzo to get him to a good place. Hanzo has never — I think he’s one of the most fun characters to play. I love the way the bow feels. I think obviously everything is very subjective when it comes to hero choice. There’s chocolate and vanilla. For me, if I’m playing a sniper, I’d much rather play Hanzo than Widowmaker. I just love how the bow feels. But Hanzo’s never been considered a powerful meta character. In fact, sometimes your team actually questions why you’re playing Hanzo. We need something different right now.

You’ve never seen the team say, well, if we’re gonna win this match, we better have a Hanzo in the comp. Someone switch Hanzo! We’d like to get him there. With that said, Scatter Arrow gets a lot of flak. I said recently on the forums, one thing that annoys me is when people say it’s a no-skill shot. It’s a very well-placed, highly aimed shot. GamesBeat: Why is it that people can accept getting headshotted by Widowmaker, but if you aim at their feet for a one-hit kill, everyone loses their mind?

Kaplan: There’s a fantasy and an expectation. We have a Blizzard design value that we call “What is the fantasy?” I think Hanzo betrays that in some ways. It’s acceptable when you see the kill cam and Hanzo or Widowmaker has that perfectly placed headshot from 40 meters across the map. You’re like, “Okay, I gotta give that to you.” You earned that. There’s something emotional about, “I got shot in the feet and I died.” Especially when tanks are taking it and getting one-shotted. That’s a problem. I would like to get Hanzo to a more meta place, to a place where I think he’s overall a more accepted character, without changing how great that bow feels. How does Scatter Shot factor into that? I’m not really sure at this point. I don’t think there’s such a thing as just nerfing Scatter Shot. That’s not the correct thing to do with Hanzo. You have to look at Hanzo holistically, in the same way that we look at someone like D.Va or Symmetra or Mercy more holistically. You don’t just tweak a number and then that character’s fine.

GamesBeat: Earlier in the year, you made a video talking about player toxicity and urging people to be nicer. Since making that plea, have you noticed any changes, any improvements in player behavior? Anything tangible?

Kaplan: We did. First of all, there were a lot of anecdotal stories that players posted. A lot of people were just annoyed with me in that developer update, and then there were some people who said, “Yeah, I was annoyed with Jeff, but then I actually — I know I’m a toxic player. I went and tried to be nice to people and here was my experience.” We started to see those stories come out. I always think of the multiplicative effect when you’re talking about something like Overwatch. We have more than 35 million people playing. Even those few anecdotal stories — in every match, they touch 11 other players. If that’s getting out there and affecting more people, that’s a big deal. Internally, we’re doing other stuff. We don’t usually talk about a lot of this stuff or go into detail, but we’ve been ramping up the penalties. We’ve been really trying to weed out the bad behavior as much as possible from the game.

We’re also doing a lot more things in terms of manual searches, just manually kind of trolling through the database and finding outliers. Well, this person didn’t quite trip the automatic sensors that we have in place, but this person is clearly exercising bad behavior. Let’s make sure they get a penalty, and it’s a stiff one, to dissuade them. We had other things going like that pilot program, where we were emailing people. It didn’t reach everybody. We don’t have email addresses for our console players, so we can’t email them. We couldn’t email based on every report type. There were some report types where — we were just mainly experimenting. Does this get positive feedback? I’m really excited.

I think either by the end of this year, or early next year, the reporting feedback will now be in the game itself, so we won’t even have to send you an email. When you’ve reported somebody and it’s had an effect, they’ve gotten an action, you’ll get a message that says, “Hey, thank you, we can’t give you the details obviously, but somebody that you reported was actioned.” I’ve been trying to restore faith for our players that the reporting actually does do a lot. The more that they report, the more it helps us identify and [punish] people who are exercising bad behavior.