Blizzard revealed the details of the upcoming Overwatch League season at its annual fan event BlizzCon in Anaheim, California. The first match kicks off on January 10, and 12 teams will compete throughout the season for a spot in the play-offs, which start on July 11. Season tickets will go on sale on November 6.

The Overwatch League is Blizzard’s city-based esports organization for its hit team shooter, which now boasts over 35 million players worldwide. It recently announced HP and Intel as sponsors, and its team owners come from esports, such as Cloud9 with its London Spitfire team, and traditional sports, such as Stan and Josh Kroenke, who own sports teams like the Los Angeles Rams.

“During the regular season, each team will play twice per week across four game days,” said Overwatch League commissioner Nate Nanzer. “Wednesday, Thursday, Friday, Saturday, with three matches played each day. We mixed up the start times each day so we could reach as many of you around the world as possible.” 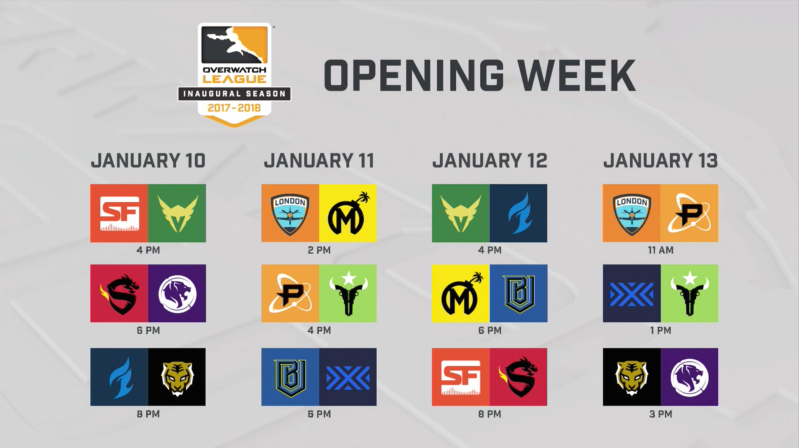 Above: The schedule of Overwatch League’s first week.

The season will be split into four stages, each of which will feature matches on eight different maps. Every stage will last five weeks and end in a title match with a $125,000 performance bonus that’s up for grabs.

Overwatch will also get new features to make it a better viewing experience during league matches. Teams will get in-game uniforms, with both home and away colors, and each hero’s skills will reflect team colors so that viewers can keep track of who’s doing what. Instant replay and a third-person camera will offer a better view of the action, and a top-down map will show where all the players are in the level.

Spots in the play-offs will depend on teams’ records throughout the entire season. Folks can watch matches on the Overwatch League site as well as on the new companion app, which will also enable people to keep tabs on their favorite teams. The app’s release date is to be announced.