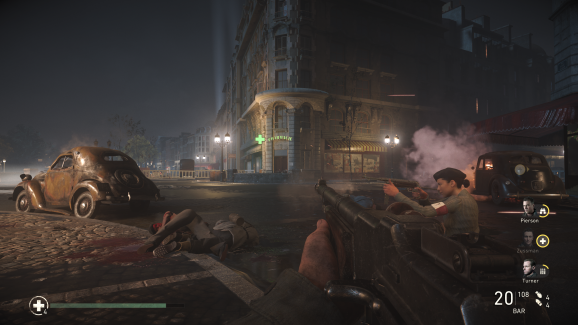 Call of Duty: WWII in action.

After Call of Duty: WWII launched last week, many players found the game struggling to maintain a solid connection. Through its November 3 launch and into the weekend, fans reported issues getting into multiplayer games. By Sunday, however, developer Sledgehammer had launched a patch to deal with the problem.

Since the update, WWII’s stability has improved a lot. I’ve had no issues finding online multiplayer gunfights. But Sledgehammer’s fix is a bandage; it beefed up its servers while also disabling a number of other features.

“At launch, we experienced an extremely high volume of players connecting to our servers in a very short window,” reads a Sledgehammer blog. “This resulted in players experiencing mixed online connectivity across all platforms. In response, we pushed a change enabling higher capacity load balancers, resulting in improved live connectivity. In addition, we made HQ a solo experience, and deactivated Leaderboard updates in the short term. This has resulted in improved live connectivity and the best in-match experience for fans.”

Leaderboards returned this morning, according to WWII director Michael Condrey. He also noted that no one lost any of their results during the downtime.

#CODWWII leaderboard updating has been restored. FYI- Your match data wasnt lost during the down time, just wasnt being displayed until now.

But Call of Duty: WWII’s HQ is still a solo experience. The HQ is the new social space in WWII that behaves a lot like the those in developer Bungie’s Destiny or Destiny 2. In the HQ, you can run around, play minigames, open loot boxes, and more.

For now, however, you’ll have to do all of those things by yourself, which defeats some of the purpose of physically dropping loot boxes into the HQ or acquiring cosmetic items to dress up your character. But Sledgehammer should get this feature back online soon, which is a relief because I got a cool new emote that I want to show off.