League of War: VR Arena debuts as an exclusive on PlayStation VR. It’s an arcade combat strategy game where two players duel with each other. Those players can battle each other inside virtual reality via the PSVR, or a VR player can square off against a player who isn’t using VR on the PlayStation 4.

I played a demo from San Francisco-based MunkyFun at a recent Sony PSVR event. The game is a remake of a mobile game, only this time you can play the game in virtual reality.

It’s like a duel between two players, where you pick soldiers and vehicles up with your hands, place them on a battlefield, and then watch them attack each other. As the commander, you can decide when and where to put the units into battle, but once they are on the ground, they move and attack the enemy on their own. Meanwhile, your opponent does the same thing, attacking you simultaneously.

If you aren’t trying to move fast, you can take an extra second to have the unit attack a particular enemy by pointing at it. The game looks good, but I kind of got the feeling that I was playing with toys, rather than with an army of units in a real-time strategy game. You can obviously dispatch many more units in an RTS on a regular PC, but the VR gameplay had some unique features.

Above: League of War is an arena RTS in VR.

“We’re a passionate game studio and we love new technologies,” Pavis said. “VR is a difficult area because there isn’t a big market for it yet. We

If you don’t have VR, you can still fight someone who is in VR. You can do that side-by-side with someone else playing on the same PSVR, on the couch. Both players have different advantages. In VR, you move more slowly, but you can point a unit at an enemy to order it to attack that unit first. The non-VR player can dispatch units more quickly, but cannot precisely target another unit. There are some wonderful explosions that resound in your ears when a unit gets destroyed.

It’s also visceral in that you hold the PlayStation Move controllers in your hands and then physically pick up a unit from your inventory and then place it on the battlefield. You have to do this carefully, so you can’t do it at a blazing fast speed. You also have to initiate the creation of your next unit using your hand control. It is a fast-paced game where each battle lasts a mater of minutes. Your goal is to destroy the opponent’s tower and base. You earn currency to build squads. 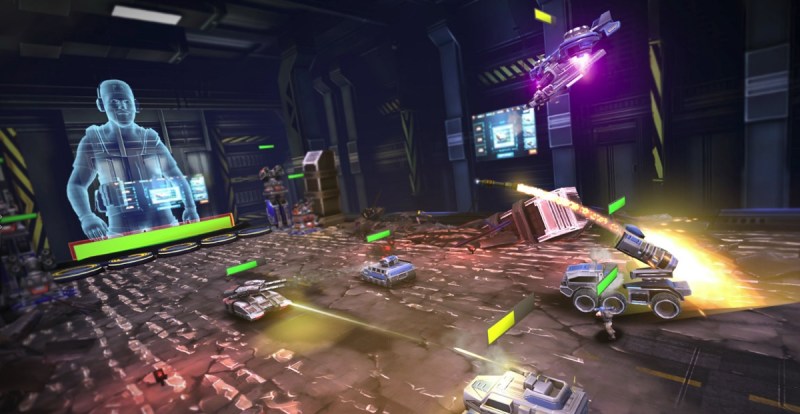 Above: League of War: VR Arena is like a tabletop strategy game.

The units include tanks, infantry, recon, choppers, and artillery. That’s enough variety to make the game slightly more complex than a rock-paper-scissors game, but it’s plenty of units to choose from when you’re under a time pressure to act fast.

The game blends multiple genres. It’s an arena battle, where one player squares off against one artificial intelligence opponent or a human opponent.

Pavis said  that the team has worked on the title for about a year, but it has been thinking about it for a long time.

“Some people say VR is anti-social, but we wanted to make a social game that was family friendly,” Pavis said. “This is easy to pick up and play. It’s not like a deep strategy game like we had on mobile.”

The game is available as an exclusive on PSVR for $20 on the PlayStation Store. It has both a single-player campaign or a multiplayer head-to-head mode. The single-player campaign lasts for about 3.5 hours. MunkyFun was founded in 2008, and it is an independent game studio that has made a wide variety of titles, including Psych!, League of War: Mercenaries (on mobile), Knight Storm, and My Horse. Pavis said a team of about eight people made the game.