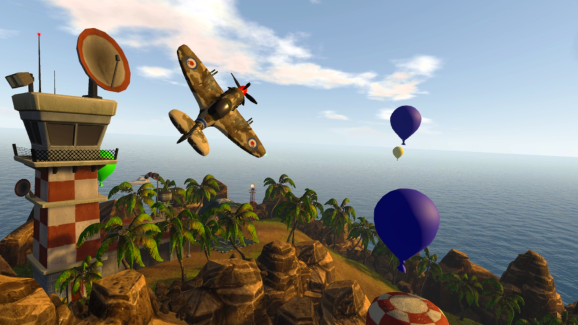 Out of everyone at Phaser Lock Interactive, Michael Daubert is the most sensitive to motion sickness. So more often than not, the chief creative officer finds himself playing the role of guinea pig when it comes to testing virtual reality games.

“I get sick very easily. … There are times when I go in the designers’ room and they have these big smiles,” said Daubert. “I go, ‘What?’ They tell me, ‘Just try this!’”

During one of these sessions, an art director convinced Daubert to try a scenario that placed him on the back of a truck. It was going 60-miles-per-hour and making incredibly sharp turns. He lasted 10 seconds at most, and swore to never do that again.

“We like to push and see how far we can go. A lot of times we’ll go way too far. And we pull it back until it becomes comfortable,” said creative director Todd Bailey.

You can experience a much slower version of the truck level — going in a straight line at 10-miles-per-hour — in the bow-and-arrow shooter Twisted Arrow (available now for HTC Vive and Oculus Rift). It’s Phaser Lock’s third game in only two years, which reflects not only the studio’s extensive experience in making games, but also the rapid iteration happening among VR developers.

The Austin-based company was ready for the launch of the Vive and Rift in spring 2016 with the aircraft management game Final Approach. And it currently has a fourth project in the works. Daubert and his colleagues — all of whom have been in the industry for 20 years or more — have clearly learned a lot about VR since founding the studio in 2015.

“There’s not a lot of wasted time. There’s a lot of, ‘Let’s see how this works and see what we can do,’” said Bailey. “We get it in and we get it done fast. We can decide very quickly whether a game is fun or not.” 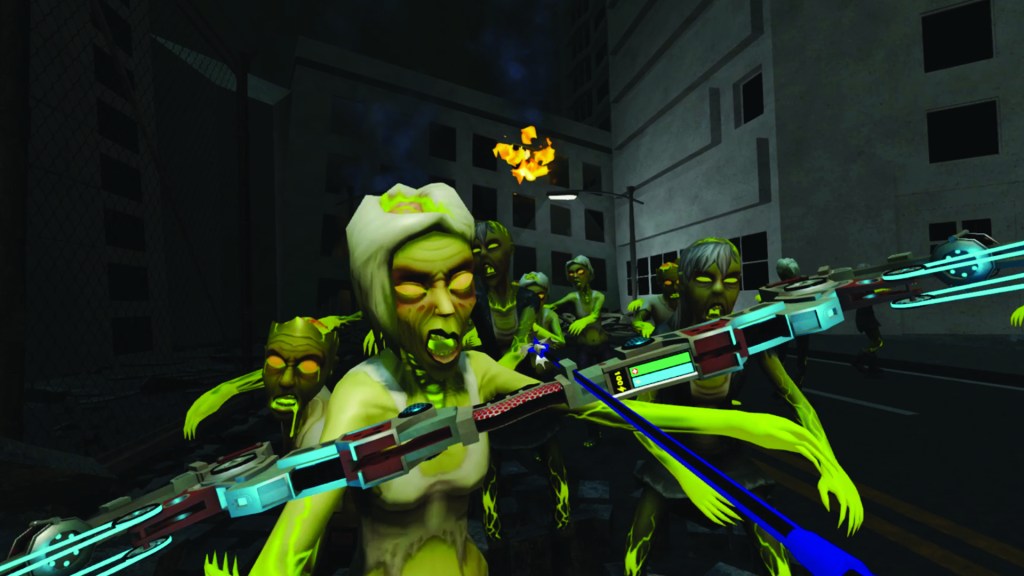 Above: Fighting zombies in Twisted Arrow.

The tale of the tumbling Iron Man

While some of their collective knowledge doesn’t apply to VR (Daubert said that only “half of it works”), they’re excited about how the technology changes common game design philosophies. It challenges them to come up with creative solutions for problems that didn’t exist before. Sometimes, that involves putting themselves through the wringer.

“We take pride and ownership of where VR is now, because we were the ones who were curled up in the corners, pale white and sweating, saying, ‘Oh, that wasn’t a good idea!’ when we were working with the first Oculus Rift dev kit. … We took the brunt of the pain,” said Daubert.

Phaser Lock had a second stomach-churning experience during Twisted Arrow’s development. Originally, the team wanted to make a tower defense game where instead of armed cannons and turrets, you’d use a variety of superheroes (from a first-person POV) to defend your base. Enter the Iron Man test. Similar to Marvel’s armored superhero, an early prototype had a character who could fly using small jets in his hands and feet.

Pulling the trigger button on either of the motion controllers (which represented your hands) would blast you in the opposite direction.

“That was one of the worst things we ever tried to do,” said Daubert.

“Trying to fly around like Iron Man made a lot of people very uncomfortable,” Bailey added, laughing.

They eventually scrapped the superhero idea and decided to focus on using a bow and arrow, which they thought was a lot of fun. So instead of deploying powers in the game, you can deliver devastating blows with different types of arrows. However, that doesn’t mean flying around like Iron Man in VR is impossible. Someone will eventually figure it out, or find a different, more comfortable way to do it.

That’s the beauty of VR: nothing is set in stone. And as Phaser Lock found out, it really comes down to trial-and-error.

“The great thing right now that we like is that a lot of games are up on Steam, anywhere from 99 cents to full-priced triple-A games. You can just jump in and try them,” said Daubert. “People are trying so many different kinds of game mechanics, movement mechanics that have never been tried before. There’s always inspiration coming from indie developers because it’s such a Wild West right now.” Above: Guiding airplanes in Final Approach is harder than it looks.

Suffering through all the headaches and nausea was hardly for naught. Phaser Lock learned a few valuable things along the way, with each new game adding to their VR expertise. One of the biggest lessons was that you shouldn’t take control away from the player.

“This is all about the player’s experience. You can guide a player in a console or PC game very easily with tricks we’ve learned over the past 25 years,” Daubert said. “Now that you’re in VR, it’s 360-degrees of exploration. If you block a player from going somewhere, the first thing they want to know is why they can’t go there. If you let a player do one thing in one place, they want to know why they can’t do that all over the place.”

The all-encompassing nature of VR also changes a player’s relationship to the digital world. Take Final Approach as an example. Even though it looks like a cartoon, its simulacrum of cities and airports was enough to convince some players that there might be real-world consequences for their actions.

“One of the things we learned early on is if you put somebody on a cliff, they won’t step off it. Even if they know they’re in the real world and they won’t fall,” said Bailey. “In Final Approach, there’s a cliff in the very first level, and you can stand on the edge of it. People won’t take a step forward. … We put them in a city in Final Approach and they would follow the streets so as not to walk through buildings. To them, it just felt wrong.”

But now that high-end VR equipment has been publicly available for more than a year now, the early adopters are hungry for deeper experiences. And triple-A studios are starting to step in to fill that need. Facebook’s Oculus recently announced that Titanfall studio Respawn Entertainment is doing a Rift-exclusive game. And Bethesda is getting ready to release VR versions of Doom, Skyrim, and Fallout 4 for Vive and PlayStation VR. 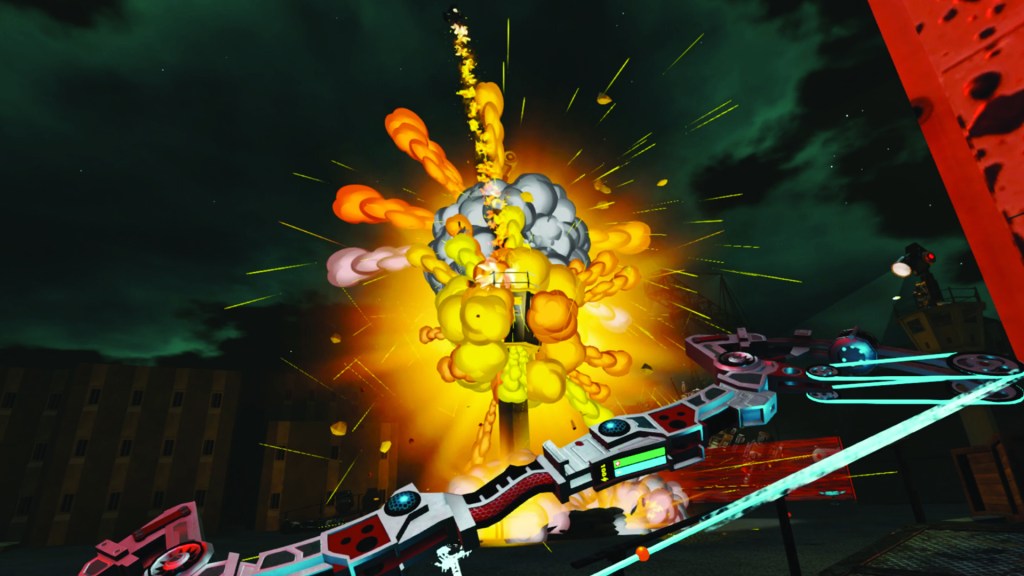 Above: That’s no ordinary bow.

For indie developers like Phaser Lock, seeing bigger companies enter the market is only a good thing, as it will help drive sales of VR headsets. But it also means they need to keep on innovating to satisfy that technologically savvy audience.

“We also feel like we need to keep constantly upping our game. The people who have the devices are in the same situation. They’ve played all these games for the last year-and-a-half. They’re not so easily wowed by, ‘Hey, look at the shiny beautiful world!’ They’re like, ‘Yeah, what else you got?’” said Bailey.

“We have to be smart. That’s where we find ourselves lucky with our development team. There’s no $10 million or $30 million budgets. You’ll never make that money back,” said Daubert.

“The budgets are much smaller on an indie level, but the opportunity and risk versus reward is better, because we’re more of the explorers of the landscape.”