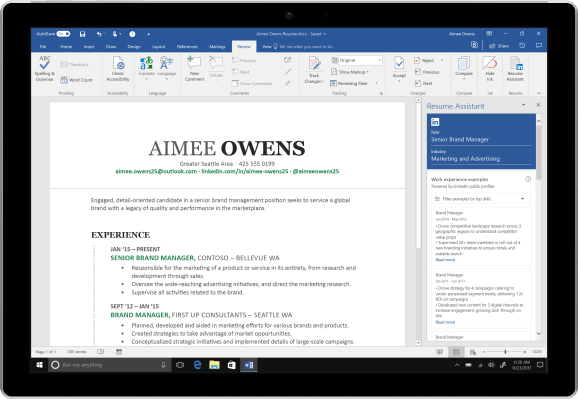 The new Resume Assistant is baked directly into Microsoft Word and will automatically kick in when it identifies a document a user opened as a resume. It will serve up examples of work experience and job titles derived from LinkedIn public profiles. You can search by role and industry, and it’s also possible to narrow things down by top skills.

Microsoft said that the Resume Assistant leans on artificial intelligence (AI) to suggest wording for your specific role, skills, and industry based on other online profiles. It may even recommend relevant job opportunities, surface articles covering resume writing tips, and connect you to resume-writing coaches through ProFinder.

The tool is less about writing your CV for you and more about helping you identify keywords and trends from similar roles that are already out there. To do this, it taps into LinkedIn’s gargantuan employment-focused database. 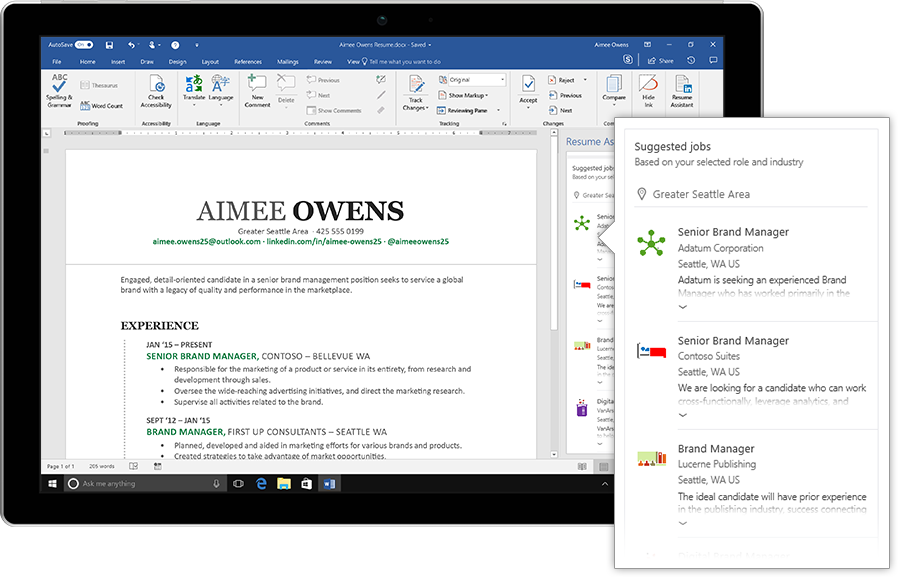 According to Microsoft, around 80 percent of the world’s resumes are edited in Microsoft Word, so this latest feature could prove useful to a lot of people. It could also be used in conjunction with Word’s existing resume templates so that Microsoft essentially helps with the design and layout for the original resume, with LinkedIn serving as wingman for the content.

Resume Assistant is the latest in a growing set of Office 365 features that use artificial intelligence and the company’s data to improve users’ experiences. Other capabilities include a Presentation Translator add-in that lets users automatically caption their PowerPoint presentations in other languages, while an Editor feature in Word uses machine learning to help users write better.

Microsoft has unveiled a number of LinkedIn integrations since it acquired the company last year for a whopping $26.2 billion. For example, back in April it announced that it would begin pulling LinkedIn data into Dynamics 365, while a few months back Microsoft revealed it would begin integrating LinkedIn Profile Cards directly into Microsoft Office 365. Today’s announcement offers further insight into how Microsoft sees its hefty LinkedIn acquisition adding value to its existing services.

Resume Assistant is rolling out today for PC users on an Office 365 subscription, but only as part of the Office Insiders program for now. It will launch to a broader user base “over the coming months,” according to a statement issued by the company.