If Star Wars: Battlefront II has a carefree mode it’s Arcade. The mode is part of the big Star Wars game from Electronic Arts that debuts on November 17.

You can play Arcade as a solo player or play with friends in in a co-op battle. It is meant to show you how to play the game, and so it’s where we started playing multiplayer at an event at Electronic Arts’ headquarters in Redwood City, California. 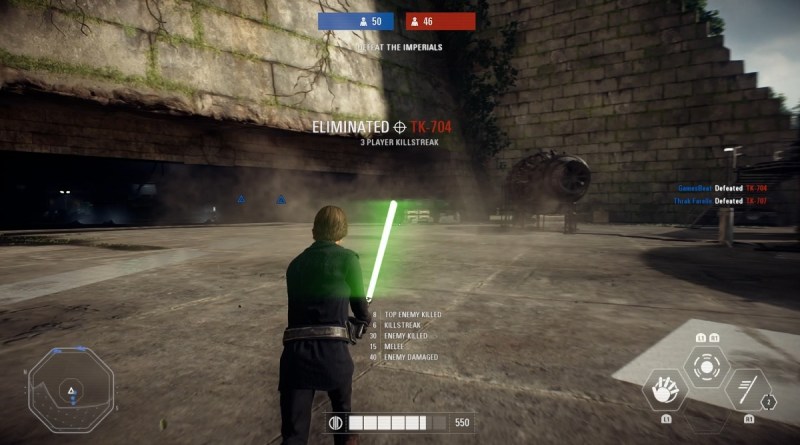 Above: You can try out the heroes in Star Wars: Battlefront II arcade mode. Luke Skywalker is hunting Stormtroopers here.

You can explore all of the main characters in multiplayer, such as the heroes and villains that you can earn in other multiplayer battles. It’s kind of a tutorial mode that starts easy, and it’s a place where you can customize your challenges. Once you master Arcade mode, you can graduate to other parts of multiplayer.

In a Tier 1 battle, you have to kill 50 troops to complete the first mission. The difficulty levels get harder as you climb through the tiers. You can also adjust the difficulty level so that the enemies are harder to beat, and you can strip away the special powers of you hero.. You can play on the Light Side or the Dark Side, as you wish. If you finish, you get one star. If you do better, you can get two or three stars. While Arcade mode seemed pretty easy, I did die a few times while wiping out dozens of enemies.

Over time, you can improve your skills. The graphics look pretty good, but it is kind of funny when the troopers run through you, or they run sideways up the stairs.

Our main video shows me playing Luke Skywalker on Yavin 4, where I chase after Imperial Stormtroopers with my lightsaber. I felt pretty invincible, even though I didn’t use any of my special powers. If you hit the left bumper, you can do a Force Push. The right bumper initiates a Force Rush, a kind of charge. And if you hit both bumpers at once, you can repulse those around you. (Some of us do that without the Force.)

Here’s a second look at another character in Arcade mode. Han Solo has to kill 20 Imperial Stormtroopers in the Cantina at Mos Eisley on the desert planet of Tatooine.

And in the third video, I played as Rey, and I learned that it’s not as easy as it looks to mow down the enemies. But I also neglected to try out the special powers.