Nikola Tesla is dead, and his murderer is somewhere in the house. But finding them isn’t going to be straightforward. In The Invisible Hours, a virtual reality mystery game, you’ll observe seven characters, eavesdrop on their conversations, and glean their secrets to unravel what happened to Tesla and why. It’s the latest title from Spain-based indie studio Tequila Works, and it’s available on the Oculus Rift, HTC Vive, and PlayStation VR for $30.

Everything happens in real time in The Invisible Hours, though you may fast-forward, rewind, and pause so that you can freely explore. The bulk of this adventure takes place in Tesla’s mansion, where the cast of characters have gathered for various reasons. Some are there by invitation, others are employees; all are haunted by events in their pasts. You can examine objects and photographs, and read notes and diary entries that go deeper into each character’s backstory as well as what Tesla was working on before his demise.

The Tequila Works team was inspired by classic murder mysteries by authors like Agatha Christie and Sir Arthur Conan Doyle, along with films by Alfred Hitchcock. Tequila Works writer and narrative director Rob Yescombe points to Christopher Nolan’s work, particularly The Prestige and Memento because of the nonlinear structure of The Invisible Hours.

As you follow the characters around the virtual world, you learn pieces of the story from that person’s interactions. But you’re also missing what’s happening at the other side of the house. It’s a game that you can sink into and requires several play-throughs to totally understand every facet of what’s occurred.

“Your understanding of the narrative really changes depending on how you choose to explore it,” said Yescombe. “All-out action is great fun in VR – shout out to the folks on Sairento and Raw Data! – but sometimes you want something more relaxing; something truly story-driven that you can really steep yourself in for a few hours.”

Tequila Works CEO and creative director Raúl Rubio cites Hitchcock’s Rear Window as an influence as well, particularly James Stewart’s character as an “all-knowing silent witness.” The Invisible Hours zeroes in on the feeling of immersion and putting the player in the middle of stories that are unfolding all around them. 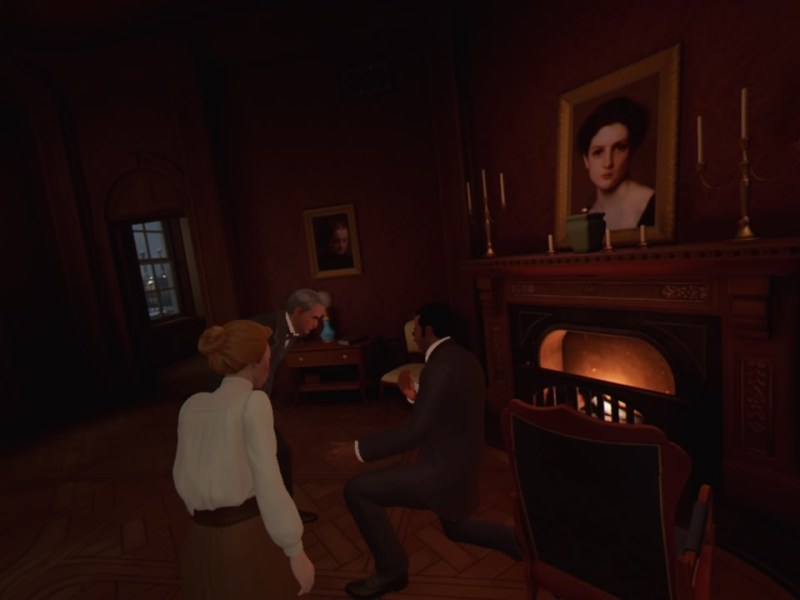 Above: A tense moment in the sitting room.

“So we built from scratch a new structure to support narrative in VR. Not in a window in front of you but as a ‘sphere’ surrounding you,” said Rubio. “Like real life, all stories would be happening around you in real time, either you are there to watch it or not. Not only that, your perception would define your truth as the so-called ‘story’ would be a series of memories or ‘dots’ of different storylines that you would connect in your mind to enhance your understanding in order to reach the ‘truth.'”

You don’t actually change any of the events in The Invisible Hours, so in a way it’s more like an immersive theater experience like Sleep No More, where you wander around a building and watch a version of William Shakespeare’s Macbeth play out around you. You can follow certain characters by gazing at them to “select” them, and they each have a kind of archetype that communicates expectations for you. There’s the butler, the glamorous actress, the prodigal heir, and so on. And there’s also Thomas Edison, whose rivalry with Tesla is legendary.

Tequila Works uses archetypes as well as historical figures to play with your expectations. And Edison and Tesla’s rivalry was ripe for intrigue. If you follow Edison’s “path,” you’ll discover different aspects of his personality and the way he viewed Tesla. And Tesla’s diary entries showed what his motivations were for his latest mysterious project.

“Of course it was the opportunity to include historical figures and putting them in situations that did not happen in our reality. That’s part of the mystery and part of some storylines,” said Rubio. “Tesla and Edison were rivals in real life. We wanted to explore what meant to be Tesla from Edison’s point of view. We wanted to know how Edison saw himself and how we interacted with others if Tesla suddenly was removed from the equation.”

“There’s something mysterious and magical about that period in history — when engineers were literally trying to invent the future infrastructure of society. It was an incredibly high-stakes moment in time: Whoever gets it right will be the author of the modern age; whoever gets it wrong goes to the grave forgotten,” said Yescombe. “That put Tesla and Edison in direct and very aggressive competition. But in our story, Tesla has started to avoid that competition – which makes Edison confused and nervous. He wants to know what Tesla is hiding. Is he really a depressed recluse like the newspapers say, or is it all part of some plan against Edison?”

One of the challenges in designing the game was that each character had to be the protagonist in their own story line. There are no side characters; if you decide to follow the heir, then his concerns and motivations have to be compelling enough on their own outside of the context of Tesla’s murder. And then there’s the fact that different characters interact and develop opinions and suspicions about each other.

“We’re all the main character and all our stories are simultaneous and interwoven; each is dependent on the existence of the others,” said Yescombe. “So that’s the structure we used for The Invisible Hours — multiple simultaneous stories; the structure of real life. And that’s why it’s such a good fit for virtual reality — because VR has the potential to mimic the feeling of real life.”

As for the best way to play the game, whether that’s wandering freely throughout Tesla’s mansion or following one character from beginning to end, Rubio and Yescombe says that that’s up to the player.

“For me personally the best way to enjoy it is as a social experience where several people can get into the play and then discuss what happened,” said Rubio. “Or you can use the 4D map and see what you missed, when and where a character flew off your radar so you can rewatch their events from a different angle.”

“For me, the true connoisseur plays without using time manipulation – from start to finish, no pausing, no rewinding – you just commit to ‘living’ in real time and miss whatever scenes you miss,” said Yescombe. “However, even though that’s my favourite way to experience the story, it was really, really important to us from the beginning that we didn’t make it needlessly difficult to explore the story. We wanted people to have total and absolute freedom in both time and space, to go anywhere they want any time they want. You can even start the story at the very end and work backwards if you want – and it will still have surprises for you.”