The word of the day is “sequel” — as in Zynga launched Words with Friends 2 today to follow up its hit puzzle game Words with Friends, which became a part of its portfolio when it acquired developer Newtoy in 2011. The original came out in 2009 and has more than 250 million downloads. Though Zynga has released a Facebook Instant Games version of the original — and made plans for a TV show — Words with Friends 2 is the first time the game gets a major overhaul. On top of the core gameplay, new features include multiplayer co-op, a new solo challenge, and skill boosts.

“At any given moment more than 57 million [Words with Friends] games are being played,” said Michelle David, Zynga’s lead experience designer. “That’s a big deal for us. To us, that means our game is really important for people, to our players. We think of our game as more than a game, but also a catalyst for our players to connect with their loved ones, and even to new friends.”

Words with Friends 2 builds on the series’ core mechanic. You can still challenge other players to spell out words on a board and compete for a high score, but the user interface has gotten a makeover. David says that they changed up the color palette and also made improvements for accessibility, such as increasing the font sizes and adding navigation tools like a shortcut button on the bottom right.

Zynga added a few other features based on popular demand. One is invisible but will definitely affect gameplay: a bigger dictionary.

“We get about 5,000 requests every day from our players within the game about words they wish they could have played,” said Gurpreet Singh, Zynga’s director of product. “About a month or so ago, we did a fairly large update to our dictionary to allow an additional 50,000 new words to be played. A large part of our inspiration for adding those words was the feedback we were getting from our players around words they wish they could have played. These are words our players use in everyday life, with their friends and family.”

Words with Friends 2 has boosts that players can use in 1-vs.-1 matches. Word Radar shows players all the places they could play a word based on the titles they currently have; Hindsight looks back on what optimal word they could have played in the previous turn; and Tile Swap Plus enables players to swap out tiles without losing a turn. 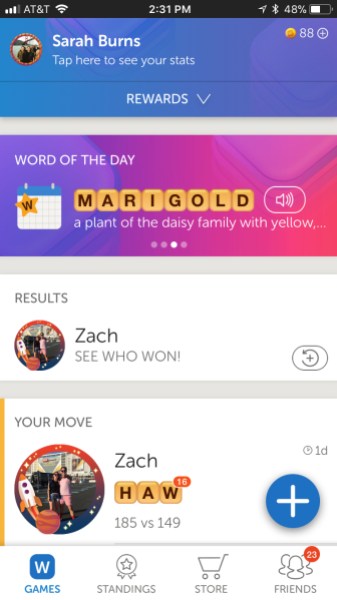 Above: The new user interface along with your and your friends’ stats.

In addition to these features, Words With Friends 2 has two new modes: Solo Challenge and Lightning Round. Solo Challenge pits you against bots (computer-controlled opponents) in a ladder, with rewards such as in-game currency and collectible badges. Each match is designed to be played quickly in one sitting, as you have to beat the bot within five moves.

“The bots are actually leveraging our latest AI technology. They play back based on the player’s patterns,” said Singh. “If I’m really good at Words with Friends and I have a very high average score, the bots are going to play back with an average score close to mine. If I’m a new player coming back to the game, and I’m still learning, it will play back based on that pattern and allow you to learn more words and tactics. They also have different personalities and play styles.”

Players will have between 10 day to 12 days to make it to the top of the ladder and grab the limited-time badge before the bots switch out to a different set. Zynga plans on running events, some of which will be seasonal. While Words with Friends 2 was in beta, it recently had a Halloween-themed ladder where you could compete against opponents such as the Beastly Bat.

These ladders fit into Zynga’s strategy moving forward, which it revealed will focus in part on live operations after a strong third quarter. It also developed the solo challenge based on user feedback, according to Singh. They wanted quicker matches, and they also wanted more opportunities to practice and improve.

“[Players are] used to waking up in the morning, making a few moves, and picking up the game later in the day, continuing that ritual,” said Singh. “But they wish that when they had more time, more pockets of time during the day, that they could continue to play the game while they’re waiting for friends to return a move. They want a short, bite-sized experience and an opportunity to continue to play the game and get better at it while their friends are making their moves back.”

Whereas Solo Challenge pits you against the machine, the Lightning Round is a 5-vs.-5 co-op mode with synchronous, real-time play. When you enter the lobby, you’re assigned four teammates, and together you have to rack up 750 points before the other team does.

“As opposed to the classic way we play, in this mode you’re sharing boards with your teammates,” said David. “Since you’re sharing, you’re playing cooperatively and collaboratively. You don’t have to worry about playing defensively, blocking different bonus tiles. In this case you want to open up the bonus tiles so your teammates can have a chance to get big words.”

Similar to the way the bots work — altering their gameplay based on the player’s average word score — the matchmaking in the Lightning Round will place players with similar average scores together. It also considers how long a player has been waiting for a match. If not enough players are in the queue, your team will be rounded out with bots.

In the last eight years, Singh says that Words with Friends has definitely developed a loyal fanbase, but they have new players coming in as well. This is because of the social aspect, as folks want to play with people they know in real life.

“We have lots of stories of people playing with their mom, with their children, with their grandparents, with their cousins and aunts,” said Singh. He added, “This is how they communicate with friends and family. Sometimes they’ll admit they do this even more than through phone calls and text messages. In this new world where this is how people keep in touch, that’s been a key driver for us, to allow players to not only just play a game, but also have that deeper connection with their loved ones through the game.”