The last month has bombarded us with huge games like Super Mario Odyssey, Wolfenstein II: The New Colossus, Assassin’s Creed: Origins, and Call of Duty: WWII. But away from all the internet buzz, triple-A budgets, and million-dollar TV spots, there are tons of worthwhile projects and weird games out there by independent developers, looking to raise funds on Kickstarter or stir up some attention on Twitter. They’re students, one-person teams, and tiny studios in isolated communities who can’t always make it out to big events like PAX or E3.

In this debut of a weekly column for GamesBeat, I’d like to spotlight a few of these games that are still in progress, whether that’s because they’re thesis projects or because they’re in the middle of a crowdfunding campaign. This week, I interviewed Oscar Brittain, who’s raising funds on Kickstarter for his frenetic role-playing game Desert Child, where you race hoverbikes and eat ramen. A free demo is available on his Itch.io page.

When you play the demo, you get an immediate sense of what the game is all about: kicking dust in your opponent’s face as you boost your hoverbike into overdrive and blast crates of money out of mid-air. Sometimes you’re streaking across red sand, other times you’re fighting waves on an aquatic racing track. It’s chaotic, scrappy fun as the screen fills with debris and explosions. In between matches, you pawn gun parts for cash, fix up your bike, and eat ramen to keep your hunger down. The goal is to make enough money, get off Earth before it blows up, escape to the nearby Red Planet. In other words, get your ass to Mars.

Brittain’s a solo dev based out of Fremantle, Australia. He inherited his love for games from his father, and the inspiration for Desert Child in particular came from titles like Delphine Software’s sci-fi platformer Flashback as well as Japanese anime like Cowboy Bebop. He’s created a retro-futuristic world where eking out a living is tough, made all the tougher by harsh desert climes.

“I really want people to like the world of Desert Child,” said Brittain. “It’s the part of the game I’m the most in love with, and I really get excited when I’m building it, or drawing parts, or making the sounds and music that bring it to life. I think the target audience is just that kid who was like me when I was younger, they just wanted to see what was happening behind the action.” 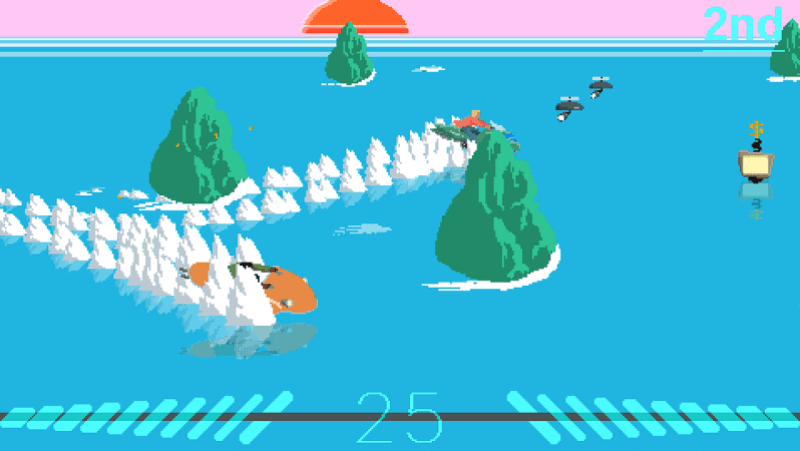 Above: Hoverbikes are all-terrain vehicles.

GamesBeat: Can you tell me more about your background and why you decided to develop Desert Child?

Oscar Brittain: My dad was a student and really into games when I was growing up, so I got exposed to a lot of different kinds of games. I always liked more cerebral games over action games, but I think I always appreciated when a game did a kind of genre mashup. Desert Child is kinda of my take on games like Flashback, which was a platformer/shooter/adventure game. I played a tonne of adventure games and always wanted things like Sonic the Hedgehog to just let me explore and take in the world like adventure games did. That’s something I’m trying to do with Desert Child.

GamesBeat: What was the inspiration for Desert Child? Can you tell me more about the story?

Brittain: I’ve had this idea for a Cowboy Bebop-inspired game gestating in my head for nearly 10 years. Originally, Desert Child was this open-ended RPG/roguelike bounty hunter game, but it was just aimless, and I pared it down into what it is now. The story grew out of this one scene I really wanted to happen: the player wins a huge race, people love them, they get handed a check for $10,000, and then they get handed the bill for all the damages they’ve caused, which add up to -$9,998. I wanted to make a game that always felt like two steps forward, one step back, but then had a laugh at that.

GamesBeat: How has it changed since you started the project?

Brittain: Well, it was originally called Hustler [laughs]. That was probably a good change. It wasn’t hoverbikes originally, it was spaceships, but I drew the hoverbike and my inner child just lit up and I realized that hoverbikes are cooler than spaceships. Once I changed that, though, everything really just fell into place and it’s been pretty consistent since then. 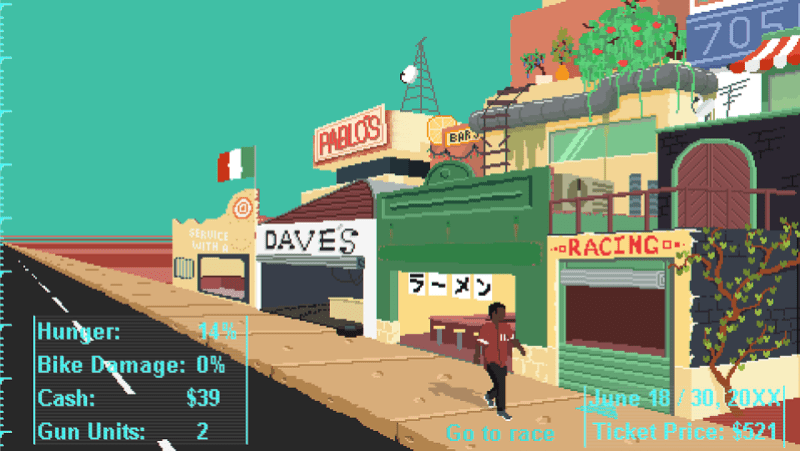 Above: A pit stop before the next hoverbike race.

Brittain: You really have to strike a balance between making your explosions fill the screen with bloom shaders and particle effects, and making the game even slightly playable. I really have to playtest absolutely everything, because I always overdo the graphical effects!

GamesBeat: What’s the indie community like where you are? Where do you go to find support?

Brittain: There’s not a huge community where I live; I have to drive like a half-hour to go to meetups and things. When you have a small group, though, people really all want to help each other. I guess I have friends I’ve met round the world who help playtest the game and give advice and support, too.

GamesBeat: As a solo dev, how do you avoid burnout?

Brittain: So, I’m lucky that I kinda have a bit of skill in all different areas. I do all the art for the game, most of the music and sound, write the dialogue, and do the coding. If I get sick of doing anything, I can just change and work on another part of the game. It’s important to take breaks, too, and remember to actually play games! I try to play a new game every week, just to remind myself how exciting the medium can be. At the same time, I try to read or try something new pretty often. Getting out of the video game mind-space is vital to coming up with fresh ideas.

GamesBeat: Who is the target audience? What do you want them to take away from it?

Brittain: I really want people to like the world of Desert Child. It’s the part of the game I’m the most in love with, and I really get excited when I’m building it, or drawing parts, or making the sounds and music that bring it to life. I think the target audience is just that kid who was like me when I was younger, they just wanted to see what was happening behind the action. Where did the people in this world go to get their laundry done? What sports do they play? Where’s the cool place to hang out?

GamesBeat: How has been your experience with Kickstarter so far? What are the main challenges?

Brittain: Kickstarter is really cool! I love just getting comments from people who feel like they can tangibly help make something they’re excited for.That’s really affirming, especially when you’re making a game that blends so many disparate elements together. I think the biggest challenge is meeting your own expectations for what you want to give to people. I’ve been trying to keep up a good level of communication, and let people see what happens behind the scenes. That’s been kinda hard, because you don’t want people to get the wrong idea about the game, or think you’re focusing too much on something that’s actually a really small part of the experience.