Cat Quest is an adorable romp through a fantasy world where you fight monsters, cast spells, and battle dragon bosses. Oh, and you’re a cat. It’s the second title from Singapore-based indie studio The Gentlebros, which specializes in cute isometric brawlers.

To get it out of the way — yes, I am a cat lady. Everything I own is covered in fur, and I’m okay with that. However, I don’t like this game just because it has kitties in it. It isn’t purrfect but it’s a genuinely fun title that harkens back to old-school RPGs with some entertaining real-time combat. It was previously released on PC, iOS, and Android in August, and it’s out today on the Nintendo Switch worldwide and PlayStation 4 in Europe (with a North America release for PS4 coming November 14). I played it on Switch, which is a great fit for its pick-up-and-play side quests.

The story is straightforward: In a world where everyone is cats, you play as a strong, silent kitty who discovers they’re a Dragonblood, a special breed of cat from an elite bloodline that helped win the Dragon Wars long ago. After your sister is catnapped by Drakoth, you have to wander the land, level up in dungeons, and fight a few dragons before finally taking on the big boss himself to rescue her. It’s pretty standard fare. However, Cat Quest’s charm is in the details. From the tongue-in-cheek location names — like the Ber-mew-da Triangle — to quirky side quests, everything is delightful and fun.

There’s a slight attempt at a serious story later down the line, but for the most part, it stays light and irreverent. As you traverse the grassy plains and battle adorable fantasy creatures like fire-wielding foxes and weird echidna-type animals, upbeat heroic music plays in the background. The side quests aren’t mechanically that different from one another, but they all have personality. One quest has you hunting monsters for meat-crazed cats. Another has you solving the mystery of two identical cities — situated in the Twin Peaks — that seem to be under some kind of curse.

There are also occasional secrets, like pirate treasure and hidden dungeons. After you gain the ability to walk across water, you can head south and fight the giant elder god Cathulhu. All of this encourages you to explore the colorful world and makes grinding feel like less of a chore. Above: Avoiding an ice wyvern in one of the dungeons.

Dodging spells, laying down traps, and hacking away at large sheep-mammoth hybrid creatures all feel great. You have a standard melee weapon, and you can equip four magical spells at once. Most battles involve maneuvering around the enemies’ area of attack. These appear either as patterns or as a red circle that gradually fills up as they’re about to try to lash out with a melee attack.

All the spells in the world except for the Cattrap skill strike in a certain pattern — fire, for instance, will light ablaze anything within a certain distance from you. Lightning (or Lightnyan, as it’s called) appears as two arrows to the left and right of the spellcaster. So timing is crucial, and you’ll spend a lot of time dodging, getting in a few hits, and dancing away to avoid being frozen. It’s a simple system, but it is often a lot of fun, especially when there are multiple enemies with different types of attack patterns approaching all at once.

Your hero has their own personal Navi, a glowing blue ghost kitty named Spirry who basically speaks for you. This is generally fine when you’re interacting with non-playable characters or when he’s giving you some backstory on the lore of what happened to the dragons. However, he’ll also literally tell you every single thing you have to do when you’re trying to complete a side quest.

Before you enter a dungeon, he’ll shout, “Destroy all the monsters!” Each time a trail of dotted red lines appears on the map, he tells you, “We should follow that trail!” I would have been okay with it if he just said it once, but it was frustrating that the game would pause so often so that he could tell me information that I already knew. It felt like constantly being in tutorial mode. 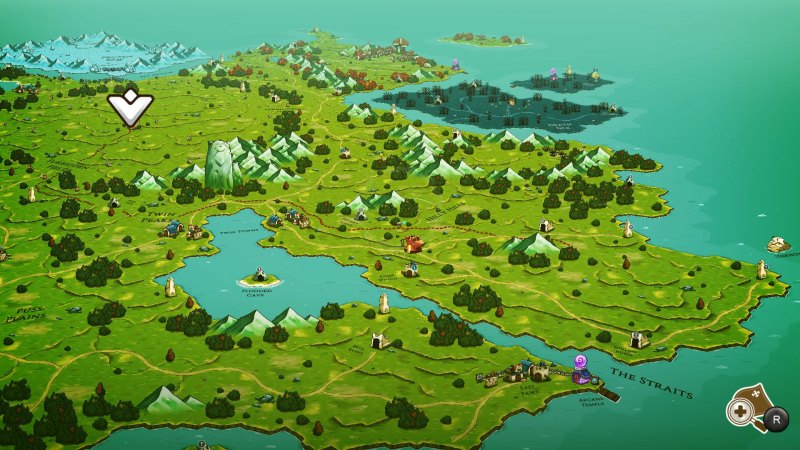 Above: A zoomed-out view of the map.

Fast travel doesn’t exist, which means you’ll spend a lot of time traversing the land to and fro. This never felt like that much of a chore because it’s a fairly small map, but the way the quest system works is that you can only embark on one objective at a time. Each town has its own quest board, and if you want to take a look at what the villagers are seeking, you’ll have to abandon whatever quest you’re currently on. If you want to resume it, you’ll have to return to the original board and pick it up again.

This adds a lot of unnecessary backtracking and the added burden of having to make a mental note of where you last saw that quest. You can’t mark any locations of interest on the map and all the villages look pretty much the same, so occasionally I’d find myself trying to retrace my steps. I found the map clunky as well, since I couldn’t move the viewfinder around or zoom in to examine details.

This is a minor quibble since it only happened to me once or twice, however it’s worth mentioning. It stuttered for me during a few dungeon battles, struggling to keep up with all the enemies, spells, and hit counts teeming on the screen. I solved this by closing out and re-starting, but it was still frustrating. Hopefully, it’s something that the developers will patch out in a future version.

It feels like the Gentlebros were having a blast making this game. After beating the boss, there are plenty of other side quests to go on if you’d like, and the generous save system makes it possible to play it for just a little while and then put it down. Cat Quest doesn’t reinvent the RPG genre. Instead it just does it well, with some cute cats to boot.