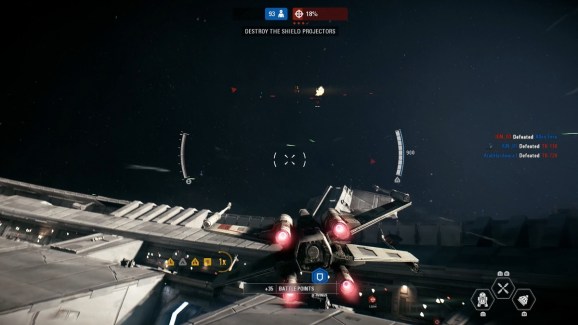 Electronic Arts is getting ready to launch one of its biggest games of the year, the multiplayer shooter Star Wars: Battlefront II, which is coming out on November 17, 2017 for PC, PlayStation 4, and Xbox One. But the buzz before its release has focused on criticism over its loot boxes and progression systems.

If you go to the Reddit page at r/StarWarsBattlefront, you’ll find a lot of players complaining about the shooter. Subscribers to EA Access are playing the game right now, and they’re finding out that unlocking some heroes can take a long time if you don’t want to spend any real money. An official EA Reddit account, EACommunityTeam, responded to a post called “Seriously? I paid 80$ to have Vader locked?” The comment has now become the most downvoted in Reddit’s history at -87,000 and climbing.

The intent is to provide players with a sense of pride and accomplishment for unlocking different heroes.

As for cost, we selected initial values based upon data from the Open Beta and other adjustments made to milestone rewards before launch. Among other things, we’re looking at average per-player credit earn rates on a daily basis, and we’ll be making constant adjustments to ensure that players have challenges that are compelling, rewarding, and of course attainable via gameplay.

We appreciate the candid feedback, and the passion the community has put forth around the current topics here on Reddit, our forums and across numerous social media outlets.

Our team will continue to make changes and monitor community feedback and update everyone as soon and as often as we can.

Most players see this, whatever EA intended, as a poor justification of a monetization plan meant to encourage people to spend money to speed up the process of unlocking heroes.

Until today, the most downvoted comment in Reddit history was from a user who comically asked for downvotes. It was at about -24,000. EA didn’t just beat the record. It crushed it.

The situation shows the challenge ahead of EA. The publisher has been trying to promote Battlefront II by focusing on how much more content it has over its predecessor, including a single-player campaign. But the narrative has gotten away from EA, with much of the talk around gaming circles focusing how Battlefront II is handling in-game currency, loot crates, and unlockables. Loot boxes give players the option to spend real money to unlock in-game items. In some titles, like Overwatch, you only get cosmetic goods. But Battlefront II is giving players abilities and weapons that can make them stronger, thus giving those who spend money an advantage.