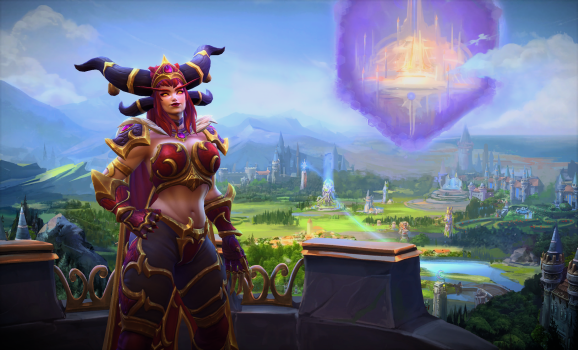 Alextrasza when she's not a giant dragon.

Heroes of the Storm had a big 2017 thanks to a significant 2.0 update that gave players a more rewarding loot system. But a MOBA like Heroes must embrace continual evolution if it wants to stay relevant in a market with heavyweights such as Riot’s League of Legends and Valve’s Dota 2.

At this month’s BlizzCon, Blizzard announced two new heroes: Overwatch’s bow sniper Hanzo, and the Aspect of Life, the dragon Alexstrasza from World of Warcraft. More characters can keep current players engaged and attract others to your game, but Blizzard is also planning other additions. The studio is rethinking towers, a MOBA staple that players must contend with, and reworking the in-game camera so it can show more.

I interviewed Heroes of the Storm’s game direct, Alan Dabiri, during BlizzCon. We talked about the new characters, the reception to Heroes 2.0, and the importance of the upcoming gameplay changes. 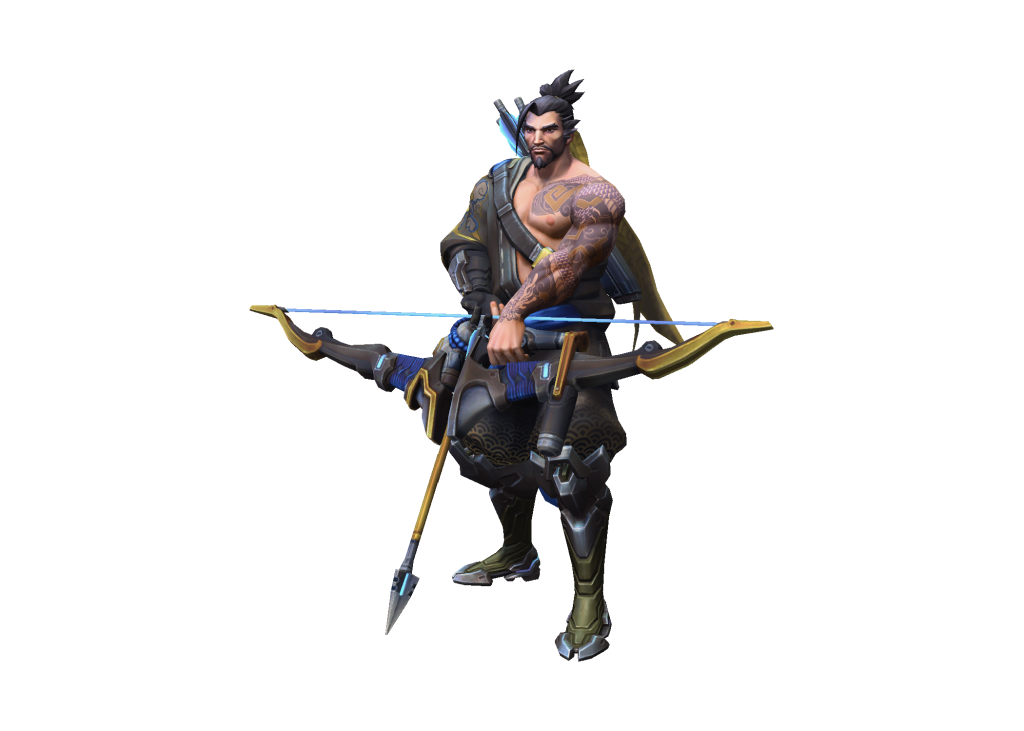 Above: Hanzo’s Heroes of the Storm model.

GamesBeat: I play Hanzo a lot in Overwatch.

Alan Dabiri: You should feel right at home.

GamesBeat: Overwatch characters seem to translate easily to Heroes of the Storm. Do you think they’ve been the simplest ones for you to bring over?

Dabiri: It’s interesting. We get asked this question a lot. It’s both easy and difficult. It’s easy because Overwatch has a lot of similar mechanics to what Heroes has. It’s a team-based game. You have different abilities, different roles, Ultimates. A lot of that translates nicely. The difficult is that it’s also a different style of game. It’s a first-person shooter, while we’re this top-down MOBA-style game. Certain things like verticality — obviously Hanzo has wall climb in Overwatch, where he can go up on top of buildings.

In Heroes, we’ve tried to get that theme with his natural agility trait and jumping over terrain, but those are some aspects that — we have to figure out the Heroes version of that. The other things that can make it difficult — Heroes is a different game in the sense that, we typically have mana as a mechanic that a lot of heroes have. In Overwatch not so much. Maybe it’s more like ammunition that you’re reloading. Some heroes, we’ve tried to use that mechanic, in the case of Tracer. Other heroes, we’ve tried other mechanics. I would say it’s both easy and it’s hard.

The other thing is, there’s also a lot of player expectation when you bring a hero from Overwatch. They’re used to a specific kind of experience, since the games are so similar. When you bring over Alexstrasza, they’ve never played Alexstrasza before. They’re not sure what to expect. You have a little more room to play with that.

GamesBeat: Most Overwatch characters bring all of their original abilities to Heroes, but you still need to give them some new moves, usually another Ultimate since your game gives players the choice of two. How do you design these new abilities?

Dabiri: The Ultimates are always the place where we can shine quite a bit with Overwatch heroes, because since in Overwatch they only have one, we can always add an extra one. Usually people want the iconic one as well. Then we’ll add the extra one that’s unique to Heroes. It’s the same way we do it for all our other heroes. It’s not specific to Overwatch. We look at what would be cool for this hero, what’s a cool new mechanic that’s exciting? What do we think we might need in the game?

You mentioned the differences between his basic attack in Overwatch, for Hanzo, and in our game it’s his Q ability. We typically wouldn’t put, on a basic attack, something like that, where you hold down the attack button like on Overwatch. For us it made sense to translate that over to an ability, and then make his basic attack longer range, slower firing, but heavier hitting. It’s something the hero designers — I think they have a lot of experience now. By the end of this year we’ll have 75 heroes in this game. It’s a challenge, for sure, but I think they’ve been doing a great job. 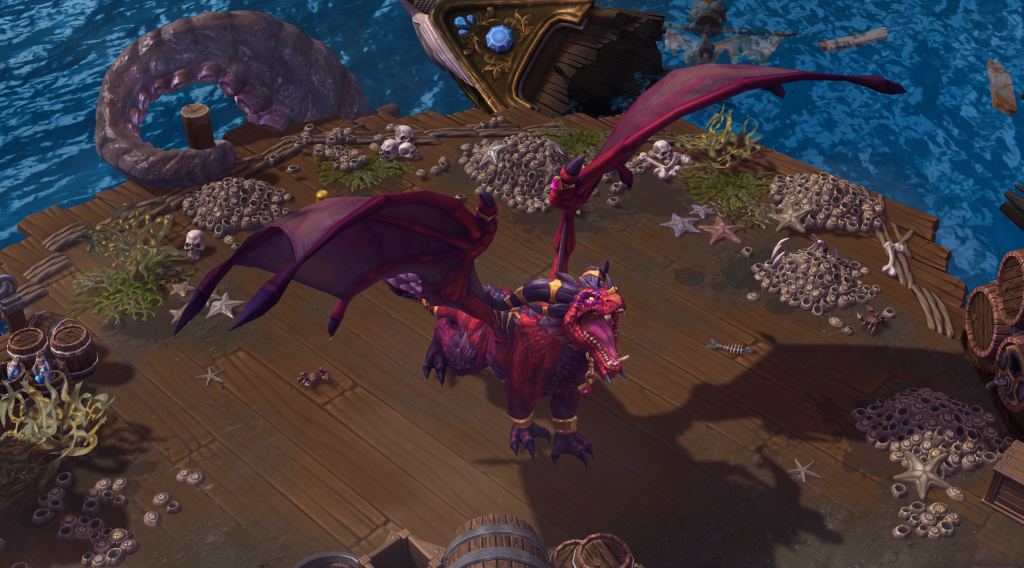 Above: That’s a big dragon.

GamesBeat: There’s always a lot of excitement when you add an Overwatch character. How do you decide which one is going to be next? You have a lot to choose from.

Dabiri: I think probably the way we choose heroes is similar for all our heroes, in the sense that — we have so many different factors. One is, clearly we want to hit the iconic heroes that are fan favorites. That’s one part of it. We also want to look at what roles are needed in our game. If we’re heavy on one thing and we need some more supports, let’s bring Alexstrasza in. She’s the Lifebinder. We can make her a support. We also look at silhouettes. We don’t want all our heroes to necessarily look identical, visually, because then it makes it difficult from a gameplay perspective. We look at what their abilities are. Can we offer something new?

In the case of Hanzo, his Scatter Arrow is something we really didn’t have in our game. In fact, we developed quite a bit of new tech just to support it with the pre-targeting UI. Literally, we’re taking into consideration all of the terrain and collision on the map. Junkrat touched on this a little bit, but Hanzo is the one where we’ve doubled down on it. It was a cool new mechanic for the game as well that we were excited to bring. A lot of factors go into it.

GamesBeat: Is it a coincidence that Hanzo and Alexstrasza both came out with this dragon theme, or is that something you thought about?

Dabiri: All those factors I just said, and then you have this other, hey, it would be cool to have two dragon characters together. We can call it Dragons of the Nexus. I’d be lying if I said that wasn’t in our minds as well. But I don’t think we would make that the only part of the decision. All these other factors go into it.

GamesBeat: Has Alexstrasza ever appeared in a cinematic before?

Dabiri: She’s been in in-game cinematics in World of Warcraft. You know, I’m not sure if she’s been in a pre-rendered [one].

GamesBeat: The cinematics are always great, but a lot of times you guys are using models that Blizzard used in other movies. But the Alexstrasza model is new.

Dabiri: Yeah, she was built purely for that cinematic. She’s even the Heroes version of Alexstrasza. Some of her look is different.

GamesBeat: In the cinematic, you show her turning into her dragon form. I was expecting this to be her Ultimate ability, so I was happy and surprised when it was unlocked at the start of the match. Why did you decide to not maker her dragon form an Ultimate move?

Dabiri: For exactly that reason. Being a dragon is cool. We want to give you that ability right away. It’s also kind of core to her fundamental identity. She’s a dragon. Being able to transform into that dragon often, even before you get your heroic, is cool. The other thing is, we kind of hit up both options. We’ve also added some cool dragon-specific heroics on her Ultimates. Cleansing Flame, where she’ll fly up into the air as a dragon and rain down fireballs on the battle.

GamesBeat: Having these transforming characters is always cool, but is that a design challenge, to balance the two forms of one character?

Dabiri: It’s definitely a challenge. We’ve experienced that with a lot of characters now. But I think we’ve also learned a lot and gotten really good at doing things. One example is, we basically replace your entire ability set with another set when you’ve transformed. But something we learned very quickly was, we want to try to keep those abilities in the new form in the same vein as the other ones. If your muscle memory is that Q does healing, when I transform, we still want that to do healing. We just want to amplify that, or do something different with the healing. In the case of, let’s say, her flame buffet ability, when she transforms, it’s basically this wing buffet ability. In flame buffet you can still do crowd control in the sense that you can slow people. In her dragon form she pushes people away. You still have this mentality of, this is how I do crowd control. It’s just a different version of it. It’s a more amplified version. 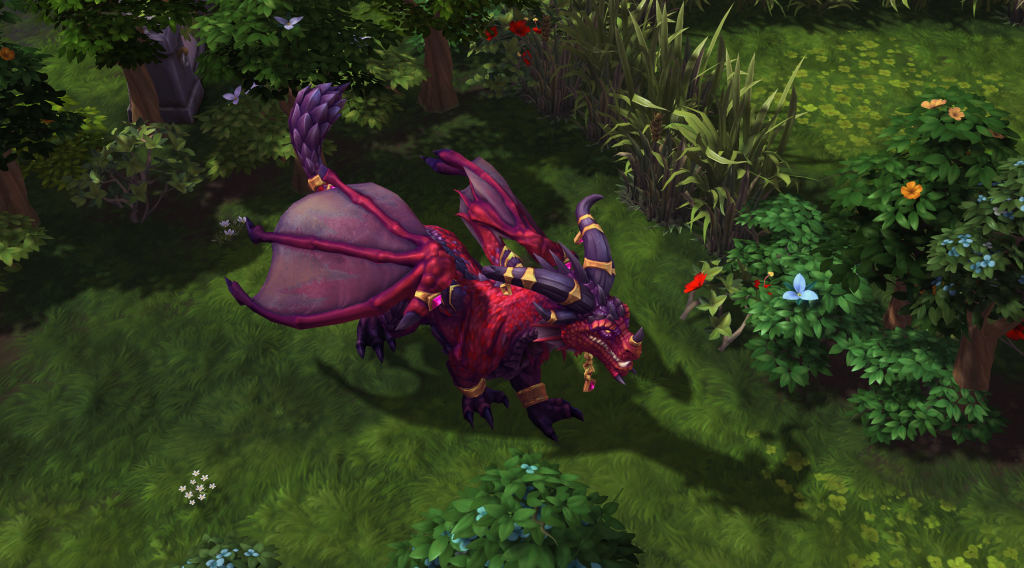 GamesBeat: Being the Heroes of the Storm guy, when you watch these other cinematics or see other new Blizzard characters, like Moira, do you look at is as a MOBA designer? Do you immediately begin wondering what her HotS abilities would be?

Dabiri: It definitely goes through the mind of the Heroes designers, for sure. We’re always excited. With us celebrating all these other Blizzard universes, we will never run out of awesome heroes. Blizzard as a whole just creates some amazing characters, both thematically and also in what they do from a gameplay perspective. So yeah, when we see new heroes like that, we definitely start salivating.

GamesBeat: When HotS launched, seeing all the different franchises together was a novelty. Now we have Blizzard World in Overwatch. It’s not that jarring anymore. All these things feel like they belong together.

Dabiri: The worlds themselves, I think, are distinct. As far as canon lore are concerned, we don’t have Warcraft characters in the StarCraft universe. But I think the Blizzard ecosystem is something really special. Players who play our games typically play many of our games. They’re used to these different experiences. Getting these few opportunities to bring them all together, I think, is really cool, and players really enjoy it.