You wouldn’t be wrong if you called Far From Noise a sitting-in-your-car-on-the-edge-of-a-cliff simulator. You play an unnamed protagonist whose car has somehow ended up hanging off a ledge far from the rest of civilization. It’s slow and zen, and if you pay attention, you can actually watch the sun set in the hazy sky.

At the end, developer George Batchelor cites naturalists Ralph Waldo Emerson, John Muir, and Henry David Thoreau as inspirations. In a way, the car acts as an accidental Walden Pond for the protagonist as she’s forced to contemplate her life, observe nature in its sometimes terrifying splendor, and think about what it means to be alive. She’s not alone in her haven, though. Far From Noise is available today on PC and PlayStation 4, and I reviewed it on PC.

Above: A tricky situation.

You know how shooters are often described as “high octane”? This is the opposite of that. The only thing you do is choose the protagonist’s dialogue. Your role mirrors the protagonist’s predicament: Trapped in her car and waiting for her engine to cool down, she can’t do much. She can only surrender to fate and see what tomorrow might bring.

It’s the same from a gameplay perspective. You won’t find any puzzles to solve, enemies to shoot, or mazes to wander through. Far From Noise is just a conversation between the protagonist and nature. Sometimes you can’t control what she says because she has her own personality, so you’re just along for the ride. It helps that the view is pleasant and sometimes downright beautiful. As the sun sinks below the horizon and stars start winking into view, you can’t help but feel calm. Even when a storm rolls in, it never feels as though there is any actual danger. Throughout, you’re lulled into a hypnotic tranquility by the sound of the ocean waves and the wind through the trees.

Though you’re controlling what the protagonist says and does, you don’t inhabit her body. Instead, you watch from a third-person view of the car and its surrounding vista. Strangely enough, this makes it feel immersive. It’s like you’re looking out of a window in your own home and surveying the situation in a contemplative sort of way.

Wandering the paths of dialogue 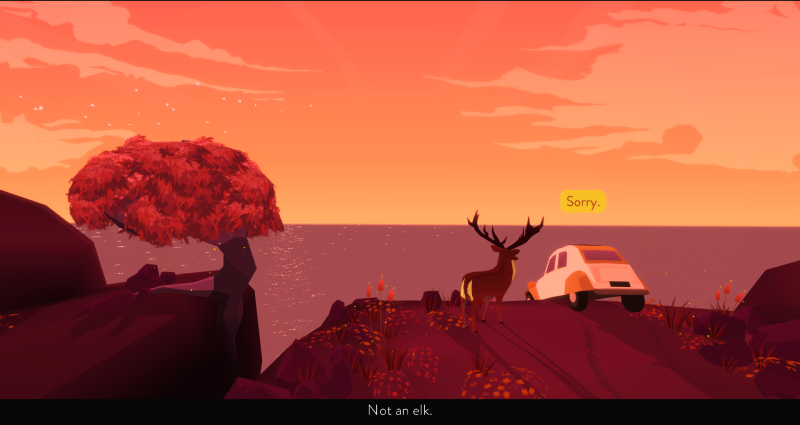 Above: Humans are so inconsiderate.

At the start, you mainly control the protagonist’s outlook on life. Is she approaching this situation with optimism? Resignation? Panic? She holds one-sided conversations with the universe, sometimes ranting, sometimes questioning, “Why me?” Then, as though the Powers That Be decided they need to reply, she’s joined by a magical telepathic stag who may or may not be really speaking to her.

The stag is your spiritual guide. It’s your stalwart companion for the rest of the game, replying with deadpan calm even if you decide to panic. It’s basically your therapist. In lieu of giving you actual physical maps to explore, Far From Noise has you explore topics of conversation. You can elect to ask the stag about itself and deflect questions about your personal life. You can choose whether you’ve always wanted to be an architect or a marine biologist. You can resist or accept the stag’s gentle suggestions to practice radical acceptance of life and all that it entails. You can unlock different events and multiple endings depending on how you decide to respond, and on a replay, you’ll find yourself discovering new facets of conversation.

And lest you think that all this existentialist talk is depressing, Far From Noise actually gets quite sassy at times. Moments of tongue-in-cheek melodrama and light banter keep the mood up even when discussing the possibility of imminent death.

Meditation that’s a little too guided 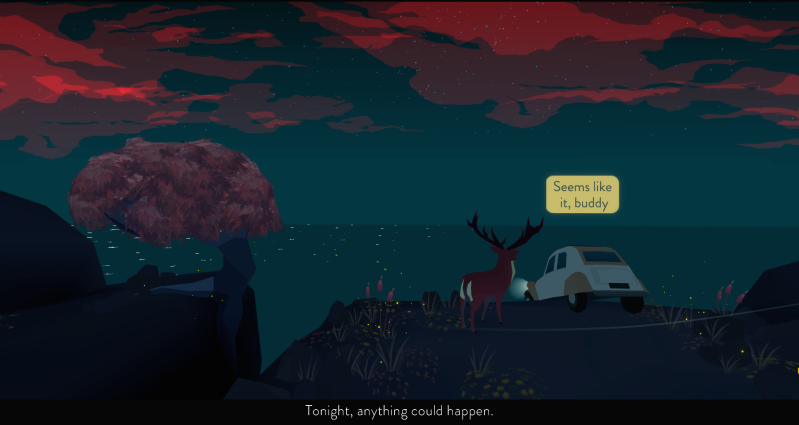 Though dialogue is Far From Noise’s core, the choices sometimes don’t feel that different from one another. Choosing between shouting “Hello?” and honking your horn feel the same. Ditto goes for “We can get through this” versus “Just got to keep calm.” Though these choices often lead to vaguely different conversations, not enough information is given about what you’re committing to when you select them.

Whether or not you’ll like Far From Noise depends on if you’re looking for a contemplative experience, one that asks you to slow down and enjoy the view. One playthrough will probably run you one to two hours, and it has replay value if you want to see where it can go.

If you’re not into dialogue-heavy games, this won’t convince you. However, I enjoyed the meandering conversation and found the main character to be relatable. She’s at a point in her life where she’s ambivalent about what she wants, and she wants to recapture simpler times from her childhood. These are feelings that many of us have experienced before, and Far From Noise is a kind of guided exploration of how we can choose to view those moments of terrified paralysis.

Far From Noise is out on November 14 on PC, Mac, and PlayStation 4. The developer sent us a code for review.