You can play Eko Studio‘s films. The New York-based company specializes in interactive media, which it creates using a free web-based platform that it developed and offers to creators for free. Using its tools, it’s made interactive music videos, such as its take on Bob Dylan’s “Like a Rolling Stone,” and the upcoming WarGames series based on the 1983 film and headed by Her Story’s Sam Barlow. The studio’s latest release is That Moment When, an episodic sitcom from creator and director Sandeep Parikh, which is available to watch on its website.

That Moment When is live action, and from time to time, it enables viewers-slash-players to affect what’s happening on the screen. Each episode features Jill (who Milana Vayntrub portrays) in an awkward situation, and viewers can try to guide her through with her dignity intact — or they can try to make her hit rock bottom.

Eko cofounder and CEO Yoni Bloch gave an example of two player mentalities: His 24-year-old brother, who always tried to go for the worst option to see what happens; and his 65-year-old mother, who was appalled whenever she picked the wrong thing because she felt responsible for Jill’s tribulations.

Bloch says that in both comedic and dramatic material, the beauty of interaction is that viewers can feel like they have agency in the story and can bring about change.

“We discovered that when you make something interactive and non-linear, but it plays on a linear timeline, just like life, then there’s something very powerful there in terms of how you can pull people in,” said Bloch in a phone call with GamesBeat. “Even though that’s been existing in gaming for a long time, in all kinds of ways, any examples of that happening with live action video were always pretty miserable.”

That’s changing now, though. WarGames is a big IP, and Eko is working with MGM on that project. That Moment When is in partnership with Sony. Bloch says that they’re seeing a lot of interest from creators who want to play with the new medium. 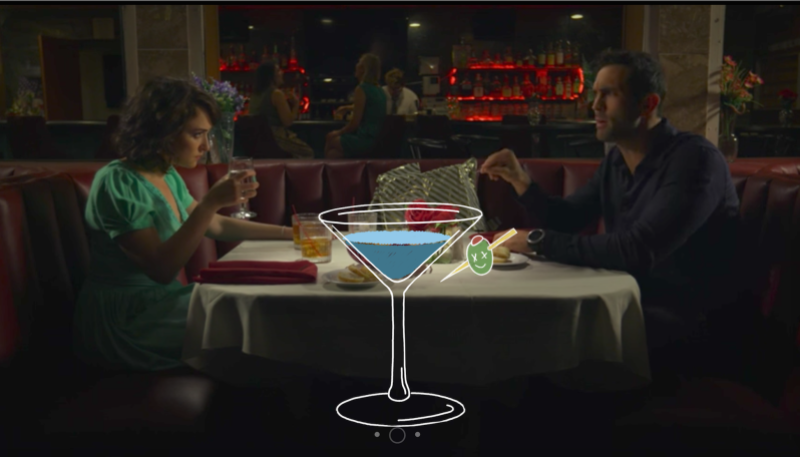 Above: A “quick-time event” in That Moment When where you have to land the olive in the martini glass.

Eko has a free suite of tools that enable creators to make live-action and animated interactive films. It’s a web-based platform where you can upload footage, create different points of view to switch to, and drag and drop buttons that, when clicked, will branch off into different storylines. It’s intuitive, and anyone can use it, provided that they sign up and create an account.

The films feature a wide array of different mechanics. In the first episode of That Moment When, you can choose the dialogue that Jill says. The second episode has minigames, such as clicking to keep a floating olive in a martini glass while Jill listens to an ex-boyfriend list out all her faults. If you succeed, she keeps her cool. If you don’t, she has a drunken outburst in the crowded restaurant.

Though it does have moments of gamification, That Moment When doesn’t have any “right” or “wrong” choices. These decisions are about playstyle and what the viewer wants to see happen.

“When I show the show to people, sometimes, it tells me about who they are as a person,” said Parikh. “They’ll play through and they’ll really identify with the character, so they want to play as positively as possible. They want to ‘win’ the game, even though winning the game isn’t really the objective. It’s just to experience it and have a good time. Or there are other people who say, I want to see the most awkward situation.”

Creating an interactive film like That Moment When comes with a whole host of challenges. For instance, they had to make the branching paths different but still feel consistent to the character. The actors had to keep several different moods in mind while acting because they could have come from a number of different dialogue paths.

Parikh and his team also had to shoot interstitial moments that would play as the viewer was making their choice on what Jill would say next. Instead of just pausing the video and letting the next video load once the viewer made a decision, they had to figure out how Jill would stall for time.

As for the minigames in the episodes, Parikh says that they’re very much informed by the character’s emotional state and what kind of situation she’s in.

“I wanted to have a minigame that was a sort of skill-based game, where you have to get this olive in the glass and hit appropriately at the right time, so it’s a real-time action game,” said Parikh. “So that’s always the motivating factor. Is this a mini-game for the sake of having a mini-game, or is it motivated by the story? We wanted to do about one per episode, which is about where we landed, except for the finale, where we have a bunch of them. We throw everything at the finale, which is a fun way to close the season out with a big bang.”

Interactive film in the future 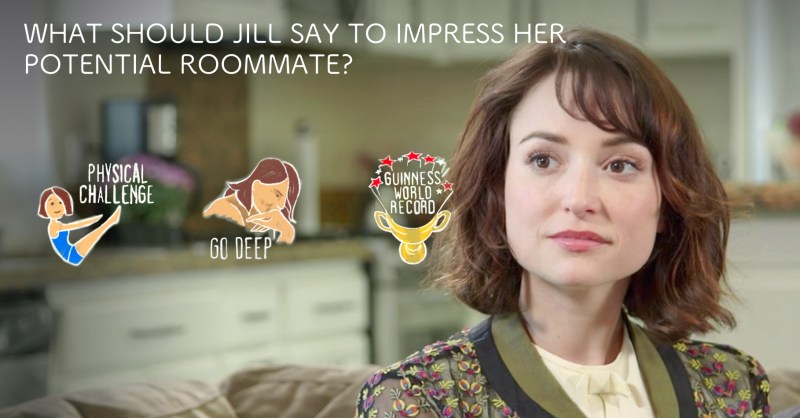 Above: An example of dialogue options in That Moment When.

Cross-pollination between film and games is becoming more and more prevalent. Publisher Annapurna Interactive spun off from a Hollywood movie studio and has released acclaimed cinematic games such as What Remains of Edith Finch. Activision Blizzard went the other way, opening a studio to focus on movies and TV shows based on its franchises like Call of Duty.

Eko remains somewhere in the middle. It strives to create projects that are native to interactive film, rather than a film with interactive elements shoehorned in or vice-versa.

“What we’re trying to do and promote is a medium that takes the best of games and the best of filmmaking and make something that can have the same artistic value as a film and the same amount of immersion—again, the games I played as a kid, I remember them more strongly than any movie I ever saw, because I was part of the story,” said Bloch. “As a kid I always imagined that I would grow up in a future where there wouldn’t be any need for films, because games would be so great.”

For instance, Bloch points to a project where viewers actually take on the role of doubt. When two characters are speaking, you can determine whether the one character believes the other. It’s an abstract kind of mechanic that echoes what viewers may already be doing, such as deciding whether a villain has a convincing motive for their sinister actions or whether the character in a horror movie has made the right decision in splitting off from the group.

“You have to decide. It’s something you’re doing in real life all the time, but you don’t necessarily have to deal with the consequences,” said Bloch. “To me, that’s beautiful – it’s a story that couldn’t have been a game, but it’s told through a live action video, and the main mechanic of interactivity could not be used in another way.”

“This is a sort of human psychology experiment,” said Parikh. “But I really think it’s this cool hybrid. It’s where the zeitgeist is kind of heading, in the sense that even our passive entertainment is getting very individualized. There’s so much content. There’s stuff that’s very niche. I think this is almost the next step, where not only is this content that might hit you personally – this feels like it’s my show – but you actually have control over the show.”

Bloch says that he believes that from the start, humans are interactive creatures. He gives one example of a friend’s 4-year-old daughter, who attempted to “click” on a window to open it in a YouTube video. Though audiences have been taught that movies are passive experiences, the innate desire to interact is still there.

In That Moment When, the Parikh still has ultimate control as he’s the creator. Viewers choose from a set of options that he created, and predetermined storylines still play out. However, Bloch says, the difference in an interactive film is that viewers are invited to participate in the story and to explore its world. He compares this act of engagement to Seder, a traditional dinner that marks the beginning of the Jewish holiday Passover. One of the customs is to tell the story of how the Jewish people escaped slavery in Egypt. Though the story always hits the same essential beats, everyone tells it in a slightly different and personalized way.

“It’s the same story, and arguably it’s been told by family after family for thousands of years,” said Bloch. “What we always say in Israel, in every family it’s the same story, but we tell it completely differently. When you go to France and have a Seder with them, their jokes, their ideas, everything is completely different. It’s a great example, to me, of how the same story can be told in a million different ways. They make it about you because they remind you of something that happened to you in school — it’s a great example of interactive storytelling.”