Sleep Tight is a shooter for the kid in all of us, going back to the days when we had overactive imaginations at night and feared monsters coming out of the walls. This inaugural game from indie studio We Are Fuzzy is an arcade-style, twin-stick shooter. The main character, who’s a kid, builds a base with pillows and furniture, and then he shoots his Nerf gun at the monsters as they attack from all directions during the night.

It’s kind of like having the creatures in the Monsters, Inc. film creep out of the closet and start attacking the lone kid. He has to fight back against them using his customized toy Nerf guns and use barriers to block them. It’s like an arcade shooter and a tower-defense game combined. The self-funded game will debut on the Nintendo Switch and PC in the first quarter of 2018.

“This game is wrapped in blankets of nostalgia,” said Maxx Burman, the creative director and cofounder of Los Angeles-based We Are Fuzzy, in an interview. 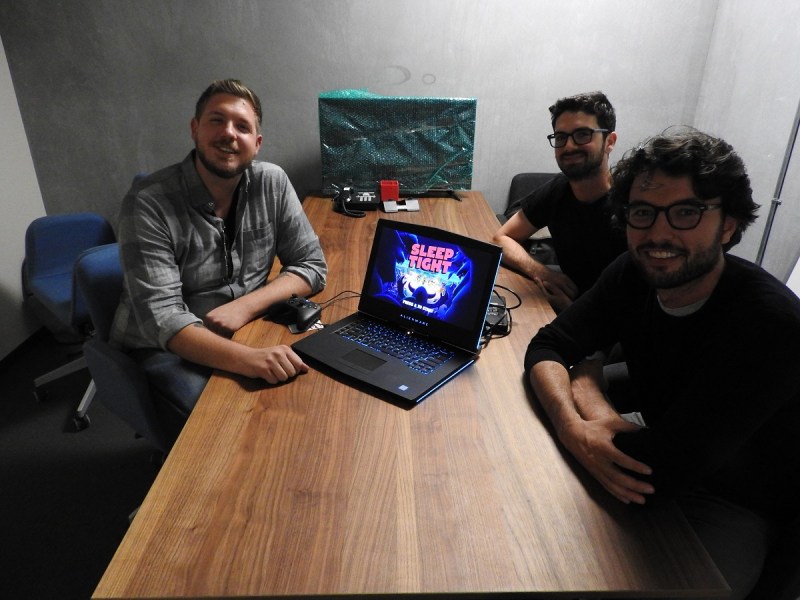 Above: The We Are Fuzzy team. Maxx Burman is on the left, and Banks Boutté is front right. Chris Gouchoe (QA and community management) is in the back.

Burman and his childhood friend Jed Jackoway came up with the idea about 10 years ago. Burman went on to work as a visual effects artist on properties such as Far Cry, League of Legends, Westworld, Game of Thrones, Call of Duty, Destiny, and Titanfall. As an art director, he made successful games for other people, but he kept this idea going in the background.

He finally formed his “dream team” of game developers and artists to bring Sleep Tight to life. He teamed up to start the company with Banks Boutté, who is a veteran virtual reality producer. Their co-creators include Dylan Ekren (who worked on movies Wreck It Ralph and Zootopia) and Ubisoft designer Oscar Mar, who worked on titles such as Far Cry and Rainbow Six. 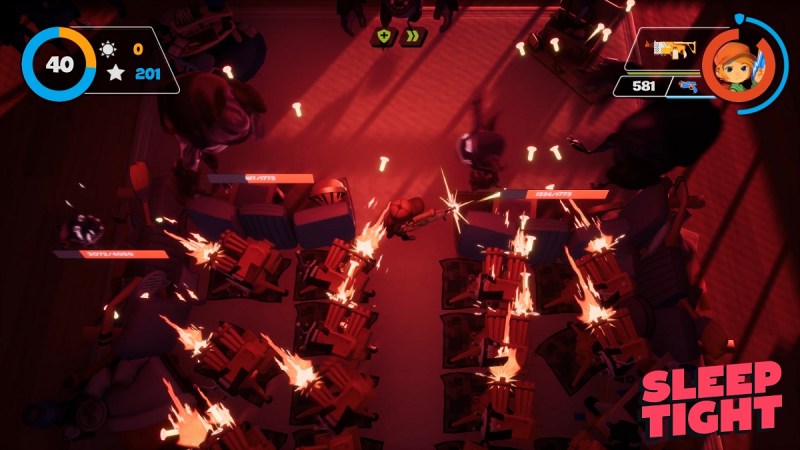 Above: Sleep Tight is a fast-action shooter where your targets are monsters from your childhood imagination.

“It’s our passion project and our first step into indie games,” Burman said. “We wanted to make something fun and have fun making a game. We wanted to do something just for ourselves for creative fulfillment.”

“The story is minimalistic,” Burman said. “You’re a kid in a room. Every night, the monsters come to get you. You spend the day preparing and fending them off. We treat the room like a blank canvas.”

“It’s about the shared childhood experiences of our imaginations running wild,” said Boutté. “The story is to build the pillow fort of your wildest dreams. Our inspiration was very much in the Pixar realm, of the kid in all of us.” 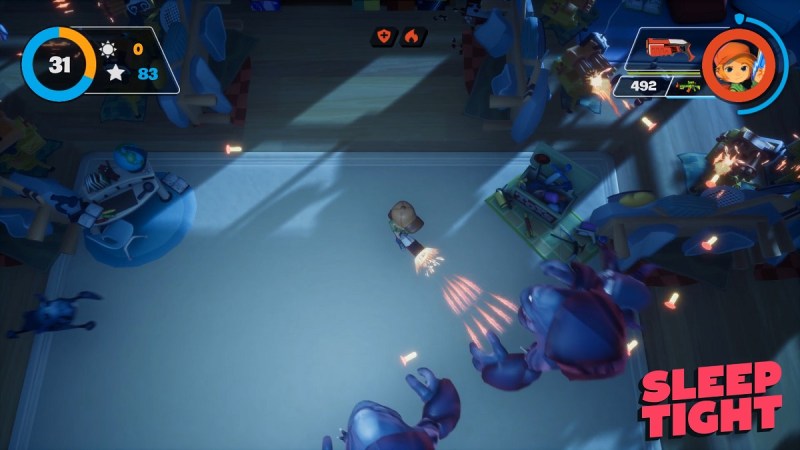 Above: Sleep Tight is a top-down shooter.

There are eight hours in the day. When you shoot a monster, you can pick up a token known as a Sun, which gives you credit to buy things in the game. You spend those Suns on things like ammo, barriers, and weapons. When you run out, the night arrives. And with the night come the monsters, who have a cartoon shape. The art style is a lot like what you’d see in a Pixar film. It’s as if Pixar’s Monsters, Inc. and Monsters University are the backstory for the game.

I played a couple of rounds of combat in a demo on PC. It was quite a hoot as I had to keep moving around the living room and shooting all the time. When I hit a monster, it collapsed and left a Sun for me to pick up. Each round lasts for just a minute. If you run out of ammo, your only recourse is to run away from the monsters. Once every 10 rounds is a Blood Moon, where the round lasts longer and is more tense.

In between rounds, I got to level up. I could choose from weapons such as Gatling guns, water-balloon launchers, remote-controlled gun turrets, and other toys. You can buy power-ups or barriers. Heavy turrets fire homing rockets that seek out monsters.

I’m looking forward to this delightful indie title as it will take me back to my childhood. I haven’t seen anything like this except in a Pixar movie.