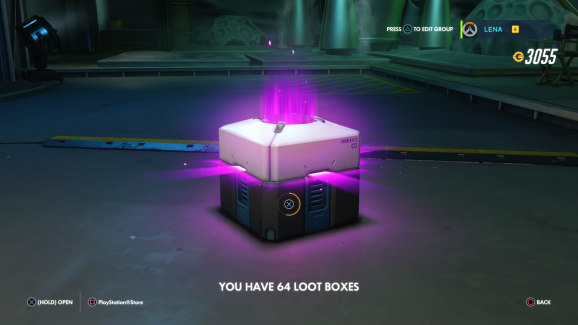 You will no doubt have encountered them already, as they are seemingly compulsory in every major new game. Perhaps you’ve opened some Hearthstone packs, which bristle with magic and static electricity as their contents is revealed. Maybe you’ve poured some money into FIFA Ultimate Team in search of Messi or Ronaldo. If you’re in really deep, you might be one of the millions that tune in to watch streamers and YouTubers open CounterStrike: Global Offensive cases in bulk.

With randomness undoubtedly a key element in the design of all these different types of loot box, the comparison with gambling is one we see frequently made. It’s not hard to see why. When you compare the feeling of opening a loot box with the one you get when you watch a little white ball whizz around a roulette wheel, or a slot-machine whirl and clunk, the similarities are certainly striking. Gabe Zichermann, gamification guru and expert on technology addiction, said of loot boxes: “It is literally, exactly, a slot machine.”

It’s therefore unsurprising that, on a neurological level, these experiences are processed in a similar way. Dr. Luke Clark, director at the center for Gambling Research at the University of British Columbia, told PC Gamer, “We know that the dopamine system, which is targeted by drugs of abuse, is also very interested in unpredictable rewards. Dopamine cells are most active when there is maximum uncertainty, and the dopamine system responds more to an uncertain reward than the same reward delivered on a predictable basis.”

This phenomenon is known by psychologists as “variable rate reinforcement.” Human beings simply find uncertain outcomes more thrilling, and with that thrill comes the potential for addiction.

Will governments step in?

This issue is now drawing a fair amount of mainstream attention. A recent petition, entitled “Adapt gambling laws to include gambling in video games which targets children,” recently hit the threshold required to trigger a response from the U.K. government. The statement reads:

“Where gambling facilities are offered to British consumers using in-game items that can be converted into cash or traded for items of real-world value, then such activities must be licensed by the Gambling Commission and adhere to strict requirements for the protection of children and the vulnerable, which include measures to prevent underage gambling. It is an offence to invite a child to gamble, and where there is a failure to prevent underage gambling, the Commission will take regulatory and/or criminal action.”

While this statement does seem to indicate a degree of recognition for the problem, it’s difficult to see any regulation actually brought into effect. After all, a very similar mechanic is at play in loot boxes’ analogue equivalents – trading card games, like Pokémon or Magic: The Gathering – yet booster packs have never been pulled off the shelves off the back of claims they represent underaged gambling. Magic: The Gathering’s manufacturers, Wizards of the Coast, have always managed to distance themselves from the booming third party market of card reselling, and you’d imagine Valve would be able to do the same with the various unofficial real-money trades facilitated by the Steam Marketplace.

More than that, though – the statement seems to be missing the point somewhat. Players don’t buy loot boxes because they hope to exchange the items for real money, they buy them because they desperately want to get hold of the latest in-game status symbol. The items clearly have value, and the only reason that value is not commensurate with a real world figure is because games do not usually allow real-money transactions to take place. The psychological mechanisms that drive addictive behavior in the face of uncertain reward are no less stimulated just because there’s no cash involved. This behavior still strongly resembles gambling.

One common justification for loot boxes’ presence in games is when the rewards are purely cosmetic, and do not bestow any competitive advantage to the player who is awarded them. But video game psychologist Emil Hodzic finds this argument unconvincing, telling IGN that “The skin will apply to the person who is really, really interested in novelty.” Whether it’s a cosmetic reward or a functional one, the psychology is the same. “There is an issue because the motivator is to drop money and keep going back to that system hoping you’re going to get it, as opposed to the game companies rewarding you for putting in the effort.”

Most microtransaction models are propped up by the big spenders, so called “whales”, who spend an amount of money on in-game purchases that far outstrips that of the typical consumer. A 2014 report by Swrve found that 0.15 percent of mobile gamers generated 50 percent of the revenue. The vast majority of players, this report found, did not make any purchases at all. And the share of the spend amongst those who did make purchases was extremely top heavy – that 50 percent of revenue was generated by the top 10 percent of spenders. Statistics for online casinos are extremely similar, with a recent study on casino site “PlayNow.com” revealing that 46 percent of the site’s revenue was generated from just 5% of its players.

Eurogamer.com conducted an interview with David ‘Siigari’ Pietz, Twitch streamer and self-described whale. David, who says he has spent “easily upwards of $20,000 in the past five years” on in-game purchases, is definitely of the opinion that loot boxes are a kind of gambling. “Absolutely! It is gambling and the same feeling you get when you pull the jackpot on a slot machine is the same feeling these companies are aiming for whether you win or lose.”

This all paints a rather damning picture. Are developers deliberately designing monetization models to prey on a small band of vulnerable individuals, for whom the thrill of opening a loot box is especially addictive? It certainly looks that way. Fuel is added to that fire by Glixel’s recent report that Activision has recently been granted a patent for a system that optimizes in-game matchmaking to maximize the chance of players purchasing in-game items. The abstract of the patent reads as follows.

While this system has not yet been applied in any games, the potential applications of this technology veer towards the scary. Imagine a world in which every game you play has systems to pour through and exploit every single little bit of data it is possible to gather about your gameplay habits, and use that knowledge to make you buy more loot boxes. And the specific example brought up in the abstract of the patent sounds especially grim; it seems like the system is built to inspire envy, to the extent that a player feels they have to buy something if they want to reach the skill level of the “marquee player”. If you’re an individual who already has a predisposition to these kinds of dangerous patterns of behavior, this becomes all the more worrying.

We find ourselves at a unique point in gaming history. The relationship between players and developers is about as oppositionary as it has ever been, and loot boxes sit close to the center of this controversy. It’s difficult to enjoy a game when you feel like it is cynically trying to rinse you for as much money as possible. It is also difficult to enjoy a game when its monetization model is seemingly designed to kickstart the spiral of addiction. The issues surrounding encouraging children to gamble, which call into question the legality of loot boxes, are possibly the most worrying of all. And when the main gist of Jeff Kaplan’s defense of loot boxes in Overwatch seems to be, “Well, we’re nowhere near as bad as other games!” that doesn’t exactly fill you with confidence, either.

The similarities between loot boxes and conventional gambling are clearly not just down to mere coincidence. And while admittedly government regulation is currently nothing more than a distant prospect, its moral grounds are difficult to dispute. Perhaps more pressing is the widespread antipathy towards loot boxes from the community at large. There is a growing consensus that these mechanics are predatory, and players are becoming less and less willing to turn a blind eye.

If developers do not seriously examine the way in which they are monetizing their games, they could well have a revolution on their hands.

Will Bindloss is the Web Editor for GINX Esports TV.