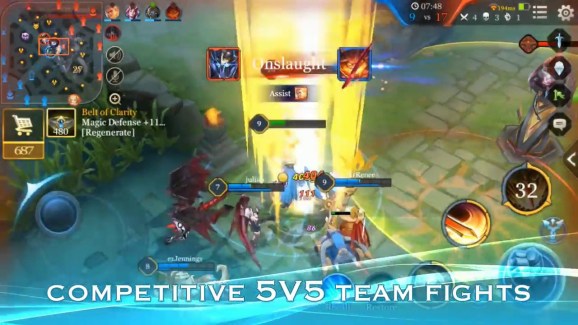 Tencent's mobile MOBA is coming to the Switch.

You probably haven’t played it yet, but China’s big mobile MOBA (multiplayer online battle arena) Honor of Kings is making a lot of money. Tencent released its financial report for the third quarter of 2017 today, and the Chinese gaming company revealed that revenues from its smart phone games grew by 84 percent compared to the previous year to hit $2.20 billion.

Tencent attributes much of this to the continued success to Honor of Kings which has over 160 million registered users. Tencent is working on a North American release, called Arena of Valor, for Android and iOS. The MOBA is also coming out to the Switch, which can it expose it to a new audience on Nintendo’s hit portable/home console hybrid machine.

Both mobile and PC were up YoY.

Tencent also gave credit to new mobile releases, including the action side-scroller Contra Return and the role-playing game Journey to the Fairyland Mobile. The team behind Honor of Kings also launched a new strategy game, Kings of Chaos.

Thanks to the success in mobile business, PC client games like League of Legends, and its online advertising ventures, Tencent’s third quarter earned total revenues of $9.8 billion, up 61 percent over the previous year. This was despite monthly active user accounts dropping by 3.8 percent year-over-over.