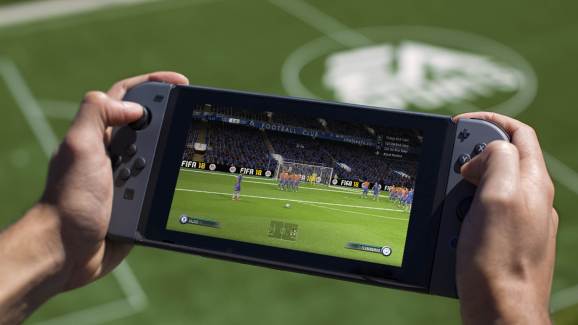 FIFA 18 in action on the Nintendo Switch.

It’s Mario time, and Mario time means Nintendo is going to sell some consoles. The company revealed today that its hybrid home/handheld Switch was the top-selling gaming hardware for October, according to industry-tracking firm The NPD Group. That puts it ahead of the Xbox One and PlayStation 4. But Switch wasn’t the only Nintendo system to outsell Microsoft’s and Sony’s devices. The Super NES Classic Edition system, which collects 21 classic 16-bit games in a miniaturized Super NES-like device, was the No. 2 best-selling piece of gaming hardware for the month.

“When combined with the NIntendo 3DS family of systems, Nintendo systems accounted for two-thirds of all video game hardware sold in the United States for the second month in a row,” reads a Nintendo press release.

The company confirmed that total U.S. hardware sales were over 1 million units, so consumers picked up at least 666,000 Switch, Super NES Classic, and 3DS consoles.

Switch’s strong October comes as Nintendo launched Super Mario Odyssey on October 27. That game seemed to drive console sales, and it was the top-seller on NPD’s software chart on a per SKU basis (meaning that multiplatform game sales are split up depending on what system they’re on). Mario Kart 8 Deluxe and The Legend of Zelda: Breath of the Wild were No. 10 and No. 11, respectively, on that list.