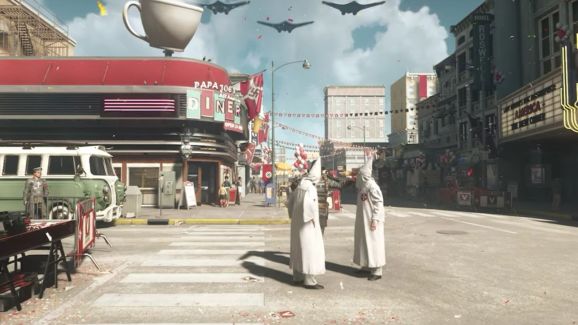 Bethesda Softworks is one of the last remaining third-party publishers that is still dedicated to building lots of single-player games. In October, it released The Evil Within 2 and Wolfenstein 2: The New Colossus, and both didn’t crack the top 10 best-selling games in the U.S., according to industry-tracking firm The NPD Group.

Wolfenstein 2 came in at 14, and The Evil Within 2 was 13th, in the list of best-selling games in the U.S. last month. Forza Motorsport 7, Gran Turismo Sport, and Grand Theft Auto V all finished higher (NPD does point out that racing-game sales are up 43 percent year-over-year). This comes with some caveats. Bethesda doesn’t report its digital sales to NPD. The only other publisher with a top 20 game that doesn’t report digital sales is Nintendo. Full-game downloads could represent anywhere from 10 percent to 40 percent of the total copies sold. On top of that, Wolfenstein 2 only had two days on the market before the end of NPD’s reporting period.

GamesBeat has asked Bethesda for clarification about how the games performed when you take digital and release dates into consideration, as the NPD doesn’t attempt to estimate or extrapolate digital sales.

But even with all of those factors in mind, October looks like another slow start for two single-player Bethesda games. Sure, we don’t have digital sales, but Wolfenstein 2 and The Evil Within 2 both debuted in October. And those first-month sales — first-day sales really — are almost always significantly larger than subsequent periods. And yeah, Wolfenstein 2 came out October 27, but so did Assassin’s Creed: Origins and Super Mario Odyssey. Two days on the market didn’t stop Assassin’s Creed from landing the No. 2 spot. And then Mario was No. 3, and remember that doesn’t include digital sales … and it’s only on one platform.

This October performance isn’t the lone slow start for Bethesda releases. Prey (2017) debuted in May, and it couldn’t outsell Mario Kart 8 Deluxe, The Legend of Zelda: Breath of the Wild, or Grand Theft Auto V. And the game has since dropped off the sales charts. Dishonored 2 did not even land in the top 10 when it launched November 2016.

The biggest issue here is that every single one of these Bethesda games are well made and the exact kinds of games many people claim they want when the complain about live-services that rely on loot boxes and microtransactions. Prey and Dishonored 2 are some of the best immersive-sim action adventures ever made, and I think Wolfenstein 2 is the most impressive work of political criticism so far in 2017. The Evil Within 2 has even won over a lot of fans. But for some reason, they just aren’t finding blockbuster-sized audiences.