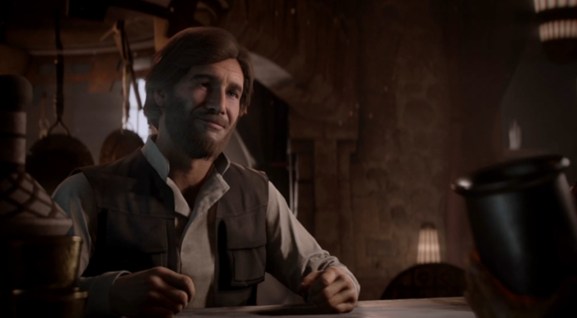 You can get the Han Solo beard skin, but it's not in a loot box.

During the development of Star Wars: Battlefront II (read our review), developer DICE began work on a mode that played like Overwatch and featured a similar business model to Blizzard’s team-based hero shooter, according to sources familiar with the production (who asked that I not print their names or titles to protect their employment). The mode would have focused on teamwork and squad composition, and — more importantly — it would have favored cosmetic items like hero costumes in its loot boxes over perks and weapons. Most of these ideas were dropped from Battlefront II due, at least in part, to a request from Disney’s Star Wars division Lucasfilm.

I’ve contacted Electronic Arts and Lucasfilm to ask if they would like to comment for this story. Neither company responded to multiple requests. I will update this post if either company decides to provide more information.

That decision is particularly interesting in light of Battlefront II’s recent turmoil. Since the game launched in an early beta-test version October 4, fans have voiced concerns about how progression and loot boxes work. Those worries escalated when Battlefront II released into an early trial mode last week where players were breaking it down to find out how much money (a lot) or time (even more) it would take to get certain coveted unlocks — like Darth Vader. In response to those fears, EA and DICE tried to explain itself in what is now the most downvoted Reddit post in the history of that site. EA further responded by reducing the cost to get certain characters.

Fan outrage culminated this week when fans caught the attention of Wall Street with their complaints about Battlefront II’s “pay-to-win” mechanics. Analysts at big investment firms like Merrill Lynch and Piper Jaffray told their clients earlier this week that angry fans could hurt the game’s sales.

But while fans were focused on EA and Battlefront II, they were also generating a lot of negative buzz around the Star Wars brand. Lucasfilm, who is very involved with EA, wasn’t thrilled about that. Since the beta, the team at Disney that oversees the galaxy far, far away tried to understand why Star Wars fans were so mad, and the sentiment surrounding the game only got worse from that point through the launch.

What is so odd is that a lot of this was likely unavoidable. Games like Overwatch and Rocket League have deep competitive modes and plenty of loot boxes, but in those games players can only win cosmetic items. This prevents people feeling like they’re at a disadvantage because they didn’t spend money.

At the same time, EA does have a lot of experience working in a model where players can get an edge by dropping some extra cash. The publisher’s FIFA Ultimate Team enable fans to assemble a dream team by slowly building up a powerful deck of cards through booster packs. You can, of course, buy those packs with real money, and that makes EA a lot of money. You can see a reflection of that system in Battlefront II.

But even in FIFA, players can compete online away from the pay-to-win structure. Star Wars: Battlefront II incorporated those ideas into the core experience.

Star Wars seems ideal for cosmetic loot, so it’s somewhat baffling that it’s not a bigger part of Battlefront II. The franchise has a lot of iconic characters that go through a number of costume changes through various films, television shows, and comic books. You would expect DICE and publisher EA to take advantage of that. That’s not the case. Battlefront II does have a hero-vs-hero mode, but only a handful of characters have alternative skins. And those costumes don’t amount to much more than a masked version of Kylo Ren or a bearded Han Solo. Even in those cases, however, you don’t get the skins from loot boxes. They are earned through preordering the game (which is important in other ways) or through playing through the solo narrative campaign. Skins are just not a part of the loot box economy in Battlefront II.

You would think that even if EA would rather charge for starcards, it would still implement a deep skin system to hook players on the customization. “Yeah, that’s my old Han Solo wearing his gear from The Empire Strikes Back — he’s a straight killer” or “I spent $100 in loot boxes to get the skin that makes Han Solo look like Dash Rendar because of course I did.” But that’s not here.

I don’t know why Lucasfilm would ask EA not to pursue a cosmetics-heavy Overwatch-like mode. Lucasfilm gaming boss Douglas Reilly told me during a conversation this week that canon isn’t a concern when it comes to what goes into a loot box. So that’s probably not the problem. And even if Disney did have good reasoning, EA should’ve known it wouldn’t get away with this. But whatever the origin for this decision, fans should look to see how Battlefront II’s business model changes moving forward.

In a blog post last night, DICE explained that it is only temporarily removing the option to spend real money. The company plans to bring it back after it makes changes to how Battlefront II works. And maybe now that Wilson and Disney have talked it out, the new Battlefront II business model will skew toward playing dress-up with your digital Star Wars heroes. In a question-and-answer session on Reddit, Battlefront II associate design director Dennis Brannvall said that “nothing is too late” when it comes to something like switching loot boxes to cosmetic only.

And c’mon, who wouldn’t pay money for the chance to put Dengar in a Princess Leia dress?