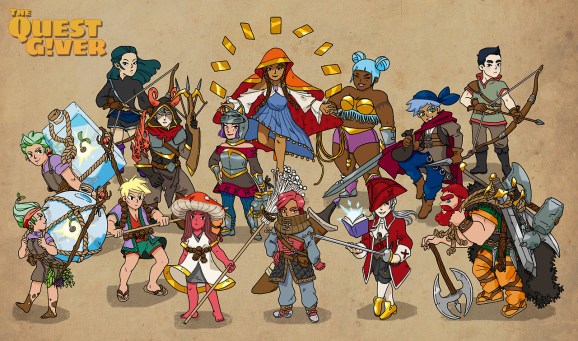 In most role-playing games, side quests appear out of nowhere on town boards that act like fantasy versions of Craigslist. The Quest Giver puts you behind the scenes as you head up your own guild and hire adventurers. The guild simulator is the second game from German indie studio Restless Games, and it’s raising funds on Kickstarter with an estimated release date in 2018 for PC, Mac, Linux, and iOS and Android devices.

“The inspiration for the game came to us by simply playing RPG games,” said Restless’s cofounder and game designer Daniel Szodruch in an email to GamesBeat. “It got to our attention how much [non-playable characters] that give you quests know about the world and its inhabitants. That’s when we first realized how hard it must be to actually be a quest giver, and that there was no game that covers this part of fantasy worlds.”

In The Quest Giver, you’re a retired adventurer who’s decided to start a guild in the city of Rhonia. To combat a spreading evil in the world, you have to create quests and recruit folks to go on them. Each day, you’re given action points that you can use to upgrade your guild, unlock different classes of adventurers, and improve resources like your bestiary. Along with figuring out who you need for mission success on a given quest, you also have to decide on an appropriate reward and maintain a good relationship with the city by crafting quests based on the citizens’ problems.

“The biggest challenge is to achieve a fictional realism,” said Szodruch. “We want to offer as many options to the player as possible, but always have to keep in mind what this means for our game world. For example, if you manage to hunt all the monsters in an area, they will permanently be extinct in that particular location. Which means we have to pay a lot of attention to the balancing.”

As a simulation game, the gameplay is mainly point-and-click as you visit different shops in town, check the city hall boards, and create quests back at your guild. Szodruch says that it’s meant to be a relaxing game, away from the battlefields.

“Of course there is a lot to do, but the main focus lies in learning about the world in order to create better, more successful quests,” said Szodruch. “Of course we’ll put some pressure on the player too, but it will come in other forms, such as the evil in the world constantly spreading and taking over regions, the citizens of your home city asking for aid, and of course the necessity to manage your finances and materials.”