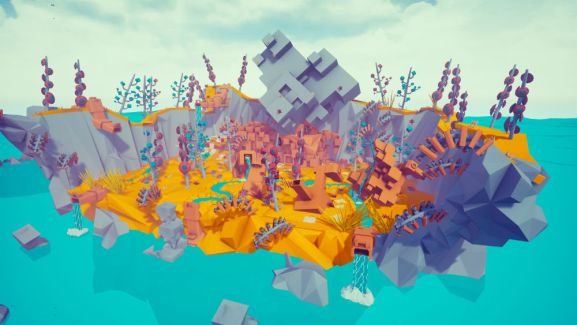 You can now download the short puzzler, called Blocks Isle, and play it in an HTC Vive.

I’ve been following closely this type of process because VR tools use intuitive or natural behavior to unlock creativity. As the tools improve, this approach could dramatically lower the barrier to entry for making compelling interactive software. That’s essentially what Google is exploring through tests like the one with Perez. Earlier this year the game Paulo’s Wing was built using Google’s other VR art app, Tilt Brush. Blocks was released more recently and makes it easy to create simple solid objects that can be stacked up over time like Lego to make eye-catching scenes.

Blocks Isle is comprised of thousands of individual objects Perez created, then he moved them into Autodesk’s 3ds Max to work on texturing and working out how they’ll be lighted so they appear to pop when added to the finished project. In a blog post outlining the project, Perez discussed the creative process, saying, “I still had to take the geometry from Blocks and bring it into a 3D program for unwrapping and lightmap baking.”

I think the project would have taken longer to put together without Blocks. Blocks helped me take out some steps in the process. Traditionally I’d model out the scene and export pieces as I went, bringing them into the engine, placing them, and moving around to get a sense of how the space feels. All that got combined inside Blocks. Oh, and not to mention color exploration. If I wanted to try out colors I’d also have to create materials and place them on each asset during the in-engine test which takes more time. I can easily preview all of that in Blocks.

He brought all the pieces he built in Blocks into Epic Games’ Unreal Engine and used Blueprints to add all the logic and interactivity that makes the world react to a player’s actions. For those unfamiliar, Blueprints is a visual way of representing the logic that makes a virtual world responsive and interactive. Blueprints makes it possible for some people to skip the arduous process of learning how to code using a programming language.

Perez said his time on the project was split about half and half between modeling/texturing the objects making up his scene and composing the scene with logic added.

“If it’s a low poly game you can easily model nearly all assets in blocks,” Perez said. “[In the future] VR is going to be how a lot of things are built.”

In the blog post Perez explained how Blocks and Unreal Engine were used as part of his creative workflow:

Tag teaming both pieces of software worked very well! Blocks allowed me to visualize and be in the space during the modeling and conceptual phase. Unreal is like giving an artist magical powers: I’m able to fully build a proof of concept and implement functionality without having to be a professional programmer.I found myself spending part of the day in Blocks experimenting with concepts and the rest in Unreal creating basic functionality for those ideas. This method allowed for rapid prototyping and was later beneficial when populating the space with art assets.

Perez also pointed out how Google’s recently released 3D object repository Poly could help speed up the process for other creators going forward.